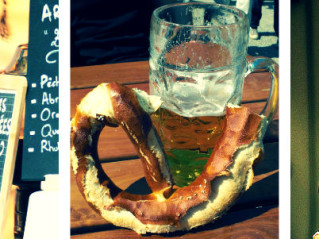 Search For The Perfect Pretzel Bavaria Is Hard To Beat I love travel for the endless opportunity to experience new cultures and cuisines. As a German native, one of the… Read More »

“As Pretty As It Gets” ~ Cycling Bavaria’s Romantic Road Ride Across The Land of Storybook Villages To the Base of the Austrian Alps “This is as pretty as a tour... Read More »

I am beside myself with excitement about our new cycling tour that goes from Copenhagen to Berlin! One reason is a food item you will undoubtedly encounter along the way... Read More »

What’s So Special About Cycling in Bavaria?

When you think Germany, what images come to mind? Lederhosen, pretzels, beer, sausages? If that sounds about right, you are actually thinking of Bavaria, a very special part of Germany.... Read More »

April marks the beginning of asparagus season in Germany and in France and is cause for celebration because it also means that spring has finally arrived. In Germany asparagus fever... Read More »

Philipp Alexander Schmitt, one of our Tour Leaders in Germany and Spain, recently shared his version of Bear Garlic Soup which some of our travelers will remember fondly from their... Read More »

Bavarian Apple Torte ExperiencePlus! Bicycle Tours has a tradition of celebrating birthdays with a dessert from an area that one of our bicycle tours travels through. This month we sampled... Read More »