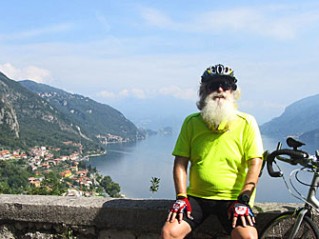 Tell your friends that you are going bicycling in the “Lake District” and most of them will think of England and the romantic English poets like Coleridge and Wordsworth.  But… Read More »

Back in 1972 ExperiencePlus! offered the first-ever commercial bicycle tour in Italy and on June 6 – 17, 2012 we invite you to help us celebrate our 40-year anniversary with... Read More »

Bicycling Italy’s Veneto and the Dolomites –...

Each year at least one or two of our travelers registers for a bicycling trip that they’ve done previously. With so many places in the world to bicycle, we wonder,... Read More »

Bicycling the Best of Southern Tuscany Plus …

Wanting to share some of the best of Italy, the ExperiencePlus! Italian tour leaders and I desired to develop a cycling tour that would combine the most exciting areas of... Read More »

Would You Like a Western Movie with that Spaghetti?

What do Clint Eastwood, Andalucia in southern Spain, the Italian island of Sardinia and Italian composer Ennio Morricone have in common?  Surely you’ve heard of “spaghetti westerns” – “A Fistful... Read More »

Cycling and Eating through the Piedmont Region of Italy

When people ask me what my favorite bike tour in Italy is, I always say Venice to Florence or Venice to Pisa because I think it is such a great... Read More »