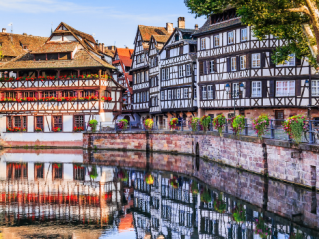 Alsace is arguably the most unique region of France. As a place that has changed hands five times between France and Germany over the last 150 years, it is now… Read More »

France is a complex and beautiful country to visit. Its people, food and regions are surprisingly diverse.  With so many things to see and it is hard to know where to... Read More »

At ExperiencePlus! we believe that cyclists of all ages, abilities and experience levels should have the opportunity to explore the world by bike. So this year, we’re rolling out a... Read More »

Cycling the Best of Southern Tuscany Piccolo Hotel La Valle is situated just outside the walls of the hilltop town of Pienza, a UNESCO Heritage Site which is also famous... Read More »

ExperiencePlus! has two brand new cycling options in the Languedoc region of southern France. Our inaugural tours May 27 – June 3, 2012 and the Plus! version which ends on... Read More »

Cycling Piemonte Plus! Lago Maggiore: The 18th century Tenimento Castle in Piedmont sits amidst expansive grounds and the lovely green space invites you to relax and enjoy the spacious central... Read More »

Provence: Ruins, History, Artists, Authors, Wine, Culinary and Cycling Delights If you’ve dreamed of bicycling through Provence we have three opportunities for you this fall; our Cycling Provence, Cycling Provence... Read More »