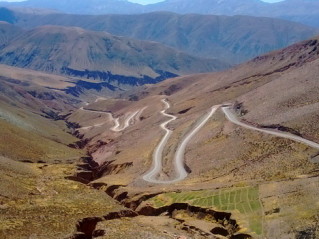 Cuesta de Lipan – A Bicycle Ride Like No Other

The time change is a clear reminder that winter is coming. In just a few weeks it will be dark when we leave the office at 5:00 p.m. (group sigh).... Read More »

Here are a few snippets we’ve gathered from various sources that capture the essence of our bicycle tour offerings in South America. We hope that they’ll inspire you to travel... Read More »

The Place: Argentina Wild. Beautiful. Astonishing. Argentina’s diverse landscapes are nothing less than what you would expect from the second largest country in South America. It’s rich history, diverse cultural... Read More »

We’ve chosen several multi-night stays in this edition of Accommodations We Love. We don’t stay longer at these hotels because we fear you’ll never want to leave! Read up on... Read More »