The Tigress of Forlì: Renaissance Italy’s most Courageous and Notorious Countess, 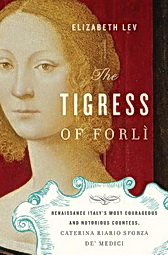 I grew up hearing the story of Caterina Sforza (as we called her) valiantly defending the castle of Forlì, my hometown.  Most shocking and impressive to my young ears was the answer she allegedly gave the commander of the siege when he threatened to kill her children if she did not surrender: “I have the means to make more.” I was told that these words were accompanied by her raising her skirts and pointing to her genitals.  Dr. Lev does not believe that this occurred, but Machiavelli and others chose to publicize this version, and this is what is proudly repeated in Forlì. Isn’t this also an example of women’s superiority over men that nobody can dispute?

What I did not know and happily surprised me were the fascinating details of Caterina’s life and the relevant role she played for about twenty years in the tumultuous and treacherous arena of Italian political life, at the end of the fifteenth century and the beginning of the sixteenth.

Caterina was born in 1463 in the Sforza family, whose founder came from Romagna (the region where Forlì lies) and took his last name from his strength or forza. Caterina grew up in Milan, at her father’s ducal court; she received a humanistic education and the training of a warrior and hunter. One of the innumerable women used as pawns in the marriage politics of the time,  Caterina was given in marriage, at the age of ten, to Girolamo Riario, a nephew of the pope , who turned out to be a coward, a dissolute and greedy husband  whom she never loved.

After insisting on consummating the marriage with his child bride, Girolamo left Caterina in her father’s care for over three years, before inviting her to Rome, where she became a favorite of the papal court for her grace, education and beauty. She gave birth to three children in two years and was pregnant for her third child when Girolamo and Caterina visited their landholdings in Forlì and Imola. At her arrival she dazzled the provincial Forlivesi with her dresses and jewels and “men, women and children jostled for a glimpse of the famous young countess.” Back in Rome she mingled with the likes of the painters Botticelli, Perugino, Melozzo (da Forlí) and was the darling of Pope Sixtus IV, the protector of the Riario family. Botticelli likely portrayed Caterina, visibly pregnant, as a graceful female figure in one of the panels of the Sistine Chapel.

When Rome became a hostile place for the Riarios, Girolamo and Caterina moved their children to Forlì, making it their permanent home. As her husband became ill and politically weak, Caterina took control of the governance of the family landholdings and made the castle of Ravaldino a safe and comfortable home.  Girolamo was assassinated by rival Forlivesi nobles and Caterina acted bravely to defend her family and their land until friendly allies arrived. It was on this occasion that the famous bravado retort was allegedly made from the ramparts of the Ravaldino fortress.

Her power reasserted, Caterina dispensed punishment and mercy on the murderers, and eventually fell in love with a young, handsome former stable boy, Giacomo Feo, whom she secretly married and with whom she had a son. After Giacomo too was assassinated by jealous courtesans, Caterina took revenge on the murderers and only slowly was able to refocus her energy on the care of her lands and her family.
Caterina built a comfortable palace within her fortress, called Il Paradiso, where she welcomed ambassadors and envoys. One of these envoys was the cultivated and handsome Giovanni de’ Medici, who turned out to be Caterina’s worthy mate in both education and status. They soon became lovers, married and Caterina gave birth to a son. Unfortunately within a year Giovanni succumbed to a fever, worsened by his chronic gout and Caterina was widowed for the third time. She was saved from utter despair by the need to defend her lands, first from Venice then from Cesare Borgia, whose father, Pope Alexander, had promised him the lucrative government of the whole of Romagna. After days of hammering the fortress of Ravaldino, defended by Caterina and a few hundreds soldiers, and after the desertion and betrayals of Caterina’s closest advisors, Cesare Borgia took the badly damaged fortress and made Caterina his prisoner. Cesare avenged himself of Caterina’s fierce defense by raping her and boasting publicly of his conquests.

Caterina remained Cesare’s prisoner for weeks, before being put in a cell in the Roman prison of Castel Sant’Angelo, where she spent an entire desolate year. She was finally released when she agreed to give up her claims to Forlì and Imola and when she received the help of French commanders who admired her courage and resilience.

Caterina’s new and last home was Florence, where she lived both at the Medici’s mansion in Via Larga and at one of the Medici’s many villas named Castello. Here she saw the last vain attempts to regain her dominions. At the Villa Castello Caterina dedicated her time to her favorite hobby, botanical experiments, which she had already pursued in the fields of the Forlí castle. She tried different recipes for antidotes to various ailments, as well as for cosmetics and shared them with interested correspondents. She dedicated time to her children’s careers and families and worked hard to ensure the future of her ‘beloved Giovanni’, the son by her de Medici husband, whom she considered the real heir of the Sforzas and the Medicis. In 1509 she fell ill with fever, which may have been a symptom of tuberculosis, caused by chronic malaria. She died at the end of May of that year at the age of forty-six.
Caterina’s legacy, besides the aura and the legend of her extraordinary exploits and accomplishments, was continued in her son, who became known as “Giovanni dalle Bande Nere,” from the black bands on his soldiers’ uniforms. He was a valiant soldier for the pope’s army for many years, married the Florentine Maria Salviati, and their son, Cosimo, would become the first Granduke of Tuscany. He brought renewed fame and glory to the Medicis and to the town of Florence, as well as to his grandmother Caterina.

Dr. Lev’s account of Caterina’s life is remarkably enjoyable, full of vivid and lively descriptions of the social and cultural life of the people of all classes during this period. Dr. Lev did an outstanding job in researching and describing the complex web of relationships, alliances and hostilities of the Italian political mosaic of this period.

I am grateful to Dr. Lev for providing an accurate and detailed account of a woman, who was one of the heroines in my early life. I hope you will enjoy Caterina’s story!