Looking for an opportunity to get some Irish culture, to savor the flavor and sound of traditional food and music of the Emerald Isle? Go ahead and rent a movie from our Ireland film recommendation page, or if this review fits your fancy, check it out! We’ve included a recipe for Irish Soda Bread so your night can be appropriately themed. 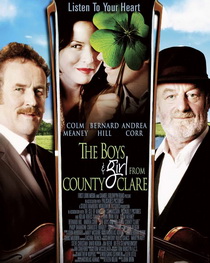 The Boys and Girl from County Clare

Set in the 1960s this is the story of Ceili bands vying for the coveted All-Ireland Traditional Music trophy. The stakes are high, the fiddles are flying, and the competition is on. Starring Bernard Hill, acclaimed actor from the Lord of the Rings Trilogy, and Irish actor Colm Meaney, and Irish musician Andrea Corr, The Boys and Girl from County Clare is a drama mixed with comedic interludes and laced with traditional Irish music.

The reigning champion band from County Clare is present, but it seems there are some other participants this year, one in particular a band from Liverpool, England.  The fiddlers of these opposing bands are brothers, still locked in a sibling rivalry to determine who is the better musician.  Although this movie seems to be telling a story just about the music, you’ll be pleased to see that it’s also about the relationships that a love of music can build, and the sacrifices some make to continue playing.  Every so often, you’ll catch a glimpse of the lush Irish countryside, but the movie mostly is set in a boisterous local pub, where much of Irish social life centers.

Who’s the winner of the competition?  We’d be doing you a disservice to reveal all here. Take an evening with a slice of Irish Soda Bread and immerse yourself in the story serenaded by traditional Gaelic music complete with fiddles and flutes.

Although this bread does grace the plates of other countries (with regional differences), the Irish have a connection with their soda bread following the Great Famine 1845-1852. Baking soda first appeared in Europe in the 1840s, and with it came recipes of breads, cakes, and scones that use baking soda as a leavening agent instead of yeast.

Irish soda bread has a rich history. Since the climate in Ireland disallows hard wheat plant growth, this bread uses soft wheat.  Additionally, because it was historically simple to find adequate fuel such as firewood, heather, or even peat, the Irish could cook whenever they wanted to in the comfort of their own homes instead of traveling to a community oven.

There are two main types of soda bread, cake and farl. Both are consumed in the North and South.  Cake is a kneaded dough shaped into a round with a cross carved in the top, usually baked in an oven (or historically on a hearthstone). Farl, on the other hand, is rolled dough, cut into four pieces (‘quartered’–where the name ‘farl’ comes from) and cooked in a frying pan or griddle.

Although several recipes tout Irish soda bread qualities, the basic and most traditional soda bread is made only with flour, baking soda, salt, and buttermilk. We’ll provide a couple of options for you to decide how close you want to stick to tradition..

Mix dry ingredients together, make a well, and slowly incorporate milk. Goal is to make dough that is soft with dry, floury lumps squishy to the touch. Add more liquid if you feel you need it. When you get to this point, empty the bowl onto a lightly floured surface, where you will knead the dough into a lump (not more than 30 seconds, or it will become tough).

For cake, flatten the dough into a lump and cut an ‘X’ across the circle, cutting into the loaf about halfway through. Bake at 425 degrees Fahrenheit for 45 minutes. At the end of 45 minutes, tap the loaf on the bottom and if you hear a hollow sound, it’s done. Crunchy crust lovers can let the loaf cool on a rack, while if you prefer a softer crust, wrap the bread in a dishcloth when you take it from the oven.

For farl, you’ll cut the dough in 4 pieces and cook on a frying pan or hot griddle for 20 minutes on each side. When the pieces are well-toasted, wrap them in a dishtowel to soften the crust.

Or if you prefer check out this whole wheat option.