More than two decades ago I ate roasted chestnuts on the streets of Brussels. It was a week before Christmas. The dark night was frigid and the chestnuts I bought from the street vendor had a magical air about them. Maybe because the lyrics of “The Christmas Song,” written in 1945 by Robert Wells and Mel Tormé and recorded and released by the King Cole Trio in 1946, spoke of an idyllic time gone by. I had never seen chestnuts roasing on an open fire, despite singing about what I presumed was once a holiday tradition. I devoured their warm, buttery essence and fell in love with winter in Belgium.

I tried recreating this experience a few years ago by roasting my own in the oven, but the flavor and sensory experience paled in comparison to the streets of Belgium. I’m sure fire had a lot to do with that, so I asked Maria Elena (ExperiencePlus! co-owner) and Seth (ExperiencePlus! special projects manager) if their backyard gas fire pit might serve as a laboratory for testing out the recipe below (they said yes!). While my wish doesn’t come true until the of the month when we enjoy the final ExperiencePlus! staff gathering of 2021, I thought others might enjoy the simplicity and yumminess of roasted chestnuts and so I share the following recipe.

Two important facts to keep close to you as you embark on this project. The first recipe/instructional guide I take from the Spruce Eats, and it has ONE ingredient: 1/2 chestnuts, unpeeled, unroasted.  I am drawn to the simplicity of the instructions and the pretty pictures. You can read and follow the informative recipe here.

The second recipe I take from a Newsweek round-up on roasting chestnuts and the article itself shares a recipe borrowed from Instagram’s @chezchaya (thank you!). This one has more ingredients and takes a bit longer, but the addition of butter, nutmeg and salt make my tastebuds do a jig. 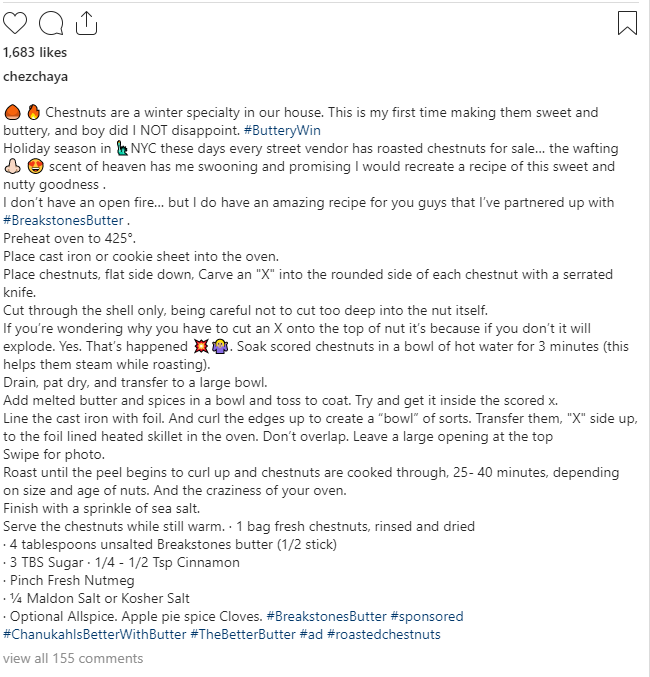