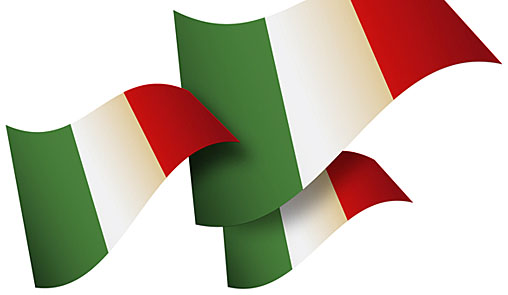 As the ExperiencePlus! Italia 150 bicycling expedition begins May 7th in Marsala, Sicily we thought it would be the perfect time for all of us to acknowledge Italy’s unification. Unfortunately we can’t all join the twenty-seven cyclists who are riding 1,400 miles in 29 days, but there are other ways to celebrate …

A Great Cook Book:
“La Scienza in Cucina E L’arte Di Mangiar Bene” or Science in the Kitchen and the Art of

Pellegrino Artusi died 100 years ago this year. At age 71 he finished his cookbook, La Scienza in Cucina E L’arte Di Mangiar Bene (Science in the Kitchen and the Art of Eating Well) and though no publisher was interested at the time, slowly it grew in fame and more than 50,000 copies were sold before his death in 1911. Today it is a perennial best seller in Italy and has been translated into several languages including English. This was the first cookbook that included recipes from all of Italy’s regions which had been unified at the time of writing for just 20 short years. Full of interesting anecdotes about the history of the recipes this cookbook provides insights into Italian culture in many ways. Available online we highly recommend Science in the Kitchen and the Art of Eating Well as it provides a unique lens into the history of Italian cooking.

Recipes that feature the Italian Flag’s colors.
Any celebration of Italy has to include delicious food so we’ve translated two recipes featured by one of the larger grocery stores in Italy that highlight the three colors of the Italian Flag – red, white and green!

Wash and dry the vegetables.

Slice the zucchini lengthwise into thin slices and then lay out on two platters.

Dice the eggplant.
Drop boil the tomatoes to easily peel and remove the skin, cut them in half and dice them finely.
Heat 3-4 tablespoons of olive oil in a pan, add the eggplant and stir fry on a medium flame, stirring as necessary. As soon as the eggplant browns a little, add the garlic. Brown that as well for a few moments, after which add the tomatoes. Cook for another 2-3 minutes (adding a few tablespoons of hot water if necessary to keep it moist). Remove from the flame and add salt, pepper, hot pepper and parsley.

Brush some olive oil onto the zucchini, salt and pepper. Roll the zucchini to create a wide cylinder. Tie with some chives or with a toothpick, then place onto the platters. Fill the cylinders with the eggplant/tomato filling. Any sauce/filling that remains can be used as garnish on the plates. Serve immediately. 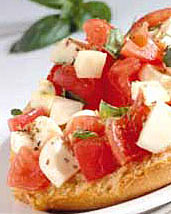 This is a variation on the traditional bruschetta—this recipe calls for “old” bread or hardened bread, which can easily be substituted with toasted sourdough bread or English Muffins for example.

Cut the scamorza into 1 cm (1/2 inch) cubes. Quickly boil the tomatoes, cut in four, remove the seeds and dice. Mix the tomatoes and the cheese in a bowl, add the chopped basil and olive oil. Don’t salt or the tomatoes will lose a lot of water. If you are using “hard” bread, quickly dip the bread into warm water to soften it, let it drip and then place on a platter and top with the tomatoes and cheese. Salt lightly and serve.