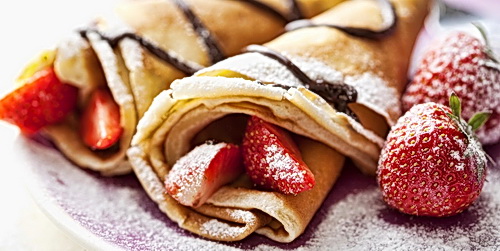 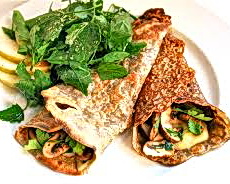 John Giebler (our Director of Tours, and occasional tour leader in France and Italy) shares his favorite crêpe recipe in honor of the new ExperiencePlus! tour in Brittany and Normandy.

This is a recipe I used to make when I lived and worked on a goat farm near Lyon which was perfect because I could prepare the batter, go milk the goats and make the evening’s cheese, and then quickly cook up the crêpes when I got back home.  It’s really quick and easy.

(You can substitute the buckwheat flour for regular flour if you prefer. It is also possible to substitute a third of the milk with beer, or replace the milk completely using soy milk.)

Sift the flour. Beat the eggs with the salt, and using a wooden spoon, mix them with the flour. Pour in the milk, little by little, stirring constantly. Let rest 2 hours at room temperature. Before cooking the crêpes, add a little water to the batter if it seems to thick. If there are any clumps, break them up with the back of the spoon.

To cook the crêpes, heat a pan until it’s hot enough that a bead of water will dance on its surface. Pans with shallow sides made of stainless-steel (or a non-stick like Scanpan pans) work the best. Season the pan with some butter before the first crêpe. Typically there’s no need to grease the pan after the first one.

Use about 2-3 Tbs batter per crêpe. Pour it into the pan and swirl it around so it coats the bottom of the pan. Cook for about 45 seconds on the first side, flip, and cook the other side for 10 or 15 seconds.

You can keep the crêpes warm on a plate over a double-boiler while you cook the others.

Fill them with anything you like. Some of the most popular fillings are ham, cheese, egg, blue cheese, mushrooms, or for a sweeter variety use butter and sugar with or without lemon, Nutella, cream and berries with honey and walnuts – let your imagination run wild. I always enjoyed some fresh goat cheese as well!