You’re doing what? Why on earth….? You’re walking how far? By yourself? How long will 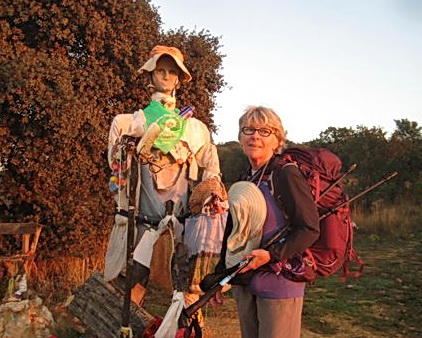 that take you? Are you crazy? Do you speak any Spanish?

Some of these questions came from friends and family, some came from me.

I first learned of the Camino de Santiago, a pilgrimage known as The Way of St. James, when I discovered that it was the subject of a cycling tour in the repertoire of tours offered by our favorite company, ExperiencePlus!. My husband and I had ridden several times with ExPlus in Europe. When friends Jane and Don from Seattle said they’d signed up for a repeat stint on the Camino de Santiago tour it was testimonial enough for my husband and me to follow. We did the ride the next year, 2012. We had already experienced ExPlus’ tour in Spain (Andalucia) with guides Enrico and Phillip. They had been most impressive with their knowledge and expertise and of course, we fell in love with Spain. On the Camino ride I was intrigued by the pilgrims on foot. As cyclists, we had passports, got stamps validating our progress along the Camino, saw the sites and learned the history and lore. And yet, there was a spark of interest in me that would not be squelched. I wanted to walk the Way, going solo, carrying all my gear on my back in a pack. And, hey, I already knew how to follow arrows!! 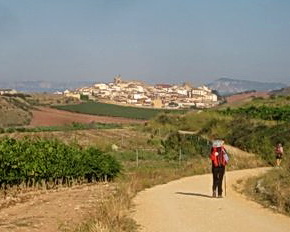 I couldn’t get the idea out of my brain. Once home, after the ride, I started walking. Never having been a hiker before, this was strange. I found myself turning frequently into my local REI looking at and trying out hiking boots, backpacks, sleeping bags, headlamps, walking sticks etc. I was, eventually, on a first name basis with several of the employees there.

Where was I going with this? Was I serious or just an innocent junkie victim of the movie The Way, and another indie movie, Six Ways to Santiago and various websites where pilgrims blogged and logged all their adventures and discoveries from their pilgrimages. It was all fuel for a fire that had started and would not be put out. I don’t consider myself a particularly religious person. My spiritual connections are with the natural world its beauties and mysteries. But the idea of a pilgrimage intrigued me.

I kept the thought alive. It felt as if I could not not go. But could I make it? Would I be able to finish? Would my age and my angst overtake me? My training lacked. I walked frequently, but maybe only 67 miles at my longest continual outing. And the goal for the pilgrimage (the Route Francais about 800 Kilometers/500 miles from the village of St. Jean Pied de Port in the French Pyrenees to Santiago de Compostela on the Atlantic coast in the NW corner of Spain) was an average of 10-12 miles a day to do it in the time I would allow myself. I realized none of the questions I had were answerable until the actual attempt. I’d never know if I didn’t try. I’d always regret it if I didn’t go. Early on, in John Brierley’s A Pilgrim’s Guide to the Camino de Santiago, (my bible) there is an inspirational quote attributed to the German poet, Goethe: “Whatever you can do, or dream you can do, begin it: Boldness has genius, power and magic in it.” That was the inspiration. That was my mantra. Begin It!! That’s what it would take.

My husband was most supportive. He would have loved to have gone along, but his knees 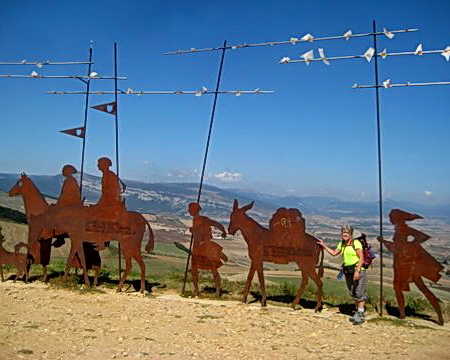 objected strenuously. That was another thing…..Would my feet, knees, hips and shins hold out. I was 67 and a half years old! Was this a good idea? Turned out that there were many older women like me. Some in better shape! Some not! Into their 60’s and 70’s! A couple in their 80’s! And what about the choice to go alone, solo? It seemed a bit daunting at first. I didn’t speak the language apart from a few phrases I’d learned from Spanish in 10 Minutes a Day. But I relished the idea of all that time on my own, free to test my personal limits, mull over my own thoughts, set my own pace, without feeling an obligation to ” keep up” or “hold back” to accommodate someone else. And, yes, it was a little scary, but I’d just read a quote somewhere that said “without scary we don’t get to be brave.”

So it seemed inevitable. After about a year’s worth of walking, an accumulation of a closet’s worth of gear and the purchase of a one-way airline ticket (because I still didn’t know if I’d last 6 days or 6 weeks) from Denver to Reykjavik to Paris, I was committed! I left Denver on September 1st, 2014.

The traveling to the starting line had its own challenges. Upon arriving in Paris I was still one metro ride, two train rides and one shuttle van away from St. Jean. After a fitful night’s sleep, my first traveling pilgrim friend, Linda, told me I had talked in my sleep and screamed half the night. Why did that not surprise me? Still with a mixed feeling of equal parts euphoria and dread, I began! 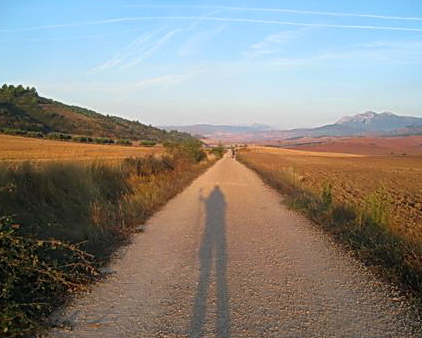 Right from the village gate, the road seemed to pitch up immediately! My pack was extremely heavy and I did not yet know, but would learn from other pilgrims that I was carrying too much stuff, and it was also improperly distributed in my 50 liter pack. It got better, but there was a lot of trial and error. The solutions included mailing a package ahead to myself to be retrieved from a post office in a city a couple of weeks down the road, donating certain “unnecessaries” and occasionally taking advantage of the up and coming new industry of the baggage/taxi/shuttle service that would, for a minimum fee, take your pack or part of it to the destination of choice further down the road. Trick was, if you wanted to spend the night with your pack, you had to travel successfully to that same destination on foot, and get there early enough to reserve a bed. I used this service only occasionally because I was always a little uncomfortable being separated from my pack.

Frustration was definitely a part of the early days. Learning to be patient with myself, doing one thing at a time, cautiously caring for blisters, trying not to compare myself to others who had longer, smoother strides that seemed to propel them forward with very little effort. Still wondering if I’d ever finish, it finally dawned on me….. It didn’t really matter if I finished. What mattered was that I had started and I was walking in the moment NOW! Toward my goal! On My Way!

Sleeping accommodations were almost always the albergues for me. Accommodating as few as 46 people and occasionally up to 100 in some of the larger spaces such as renovated schools or churches or town buildings. I overcame my fear of falling out of the upper bunks, learned to live with a chorus of snoring pilgrims (the women were the champs) but really never adjusted to the early risers and “departers”. Their noisy nylon packs and their nasty zipper sounds had me awake anyway so I joined them, leaving often before dawn. The game, stepping out into that still-dark-night, was to try to find the route markers that would guide me out of town or to the first cafe con leche of the day. 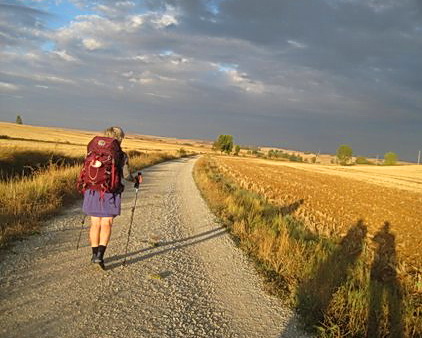 cities of Burgos and Leon. The queen/king beds, the 5-piece private baths and the monogrammed sheets made me giddy. I loved visiting these two cities in particular when cycling through before, but now, the noise, the crowds and traffic made me “itchy” and feel a kind of panic to return to the peace and solitude, the more contemplative roads of the rural path. It was sad though, to have to leave those fully stocked bar fridges at both locations.

During my ride w/Explus, crossing the section known as the Meseta had been a real challenge on bicycle because of an incessant headwind and (my thought at the time) a rather boring landscape. During the planning of my walk, I told myself that if I needed to scale down the number of days because of an unforeseen injury or delay of some kind, I would eliminate some days on the Meseta. With my walking before dawn, I was witness to fields of far flung stars in the Milky Way and to amazing sunrises at my back as I walked west. The gray light would come, eliminating the need for the head lamp. The grey would turn to a soft lavender then a light pink and before long the revealed landscape would be gilded in a golden blaze. It felt as if the whole planet belonged to me alone. Crossing the Meseta became the favorite part of my Camino journey.

In all that’s written about the Camino, there is always the reference to “community”. It occurs often and simply, starting with the oft-repeated greeting “Buen Camino” from just about each and every passing or approaching pilgrim. I loved the ease of conversations that would start up as someone’s step would sync with mine and conversation would ensue. It was easy when it was in English, but it was fun too, when foreign language challenges would be attempted. My favorite community connections were evening meals that people would share. Some albergues that didn’t offer meals did have kitchen facilities available for use. I was fortunate enough on 3different days to find that my pace and choice of albergue coincided with Thomas and Ward, two great chefs who loved to cook for the masses. They would shop, prepare and serve wonderful, yet simple meals and pilgrims could offer their expertise as needed. The cost was shared by all and if you didn’t shop, prep or cook, you were on cleanup duty. The meal usually ended with songs from Thomas’ guitar and warm feelings of comradery from sharing a special journey. 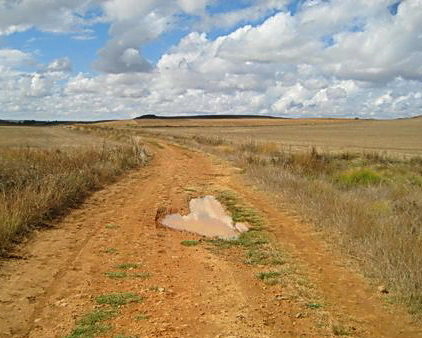 The weather, which had cooperated beautifully for most of my pilgrimage, decided in the last few days to catch up on “the inclement”. It rained solidly for the last 3 days of walking. The positives or silver lining scenario to this was that it distracted me from the fact I was unable to avoid the dreaded bed bug bites. They had appeared the 3rd or 4th day from the end, but because they were merely annoying and I was spared any real suffering I was able to cope with it. My only concern at that point was that I succeed in not bringing them back home with me. The rainy condition also had an interesting effect on the last part of the Camino that winds through the beautiful area known as Galicia. The “wet” gave this land an even more mystical and magical feeling.

It took me 35 days to reach Santiago. I arrived there on October 8th, 2014. Entering the city and passing through the Portal of Glory to the Cathedral was emotional, but in some ways almost anti-climatic. The strongest feeling that people shared near the end was that of a sadness for a loss, a kind of mourning for the fact that it was ending. I’ve been home 6 months and not a day goes by that I’m not visited by a memory or two of the Camino. Maybe a kindness performed for me by a stranger, or a laugh over a funny story shared, or a sincere hope that a sorrow has been lifted from a friend’s current path. I suppose, in that sense, the Camino hasn’t “ended” for me and the effect of this “adventure of a lifetime” will reveal itself in different ways as time passes, as I walk on.