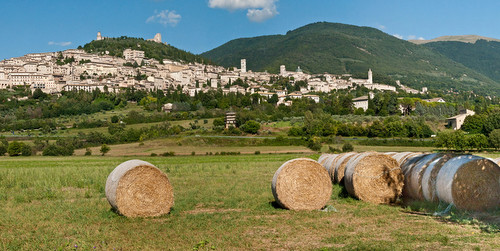 I happened to read the ExperiencePlus! newsletter and your review of the book on the 1949 Giro. Your mention of Aldo Ronconi reminded me of our entertaining encounter with him this year during our Pisa – Venice tour, the day after his 86th birthday.

As we rode through Faenza before starting our ride one morning, my wife Leigh noticed a bicycle store just down an alleyway and wanted to go in. I said fine, I’ll just be over here checking out some cameras, and so off she went. About five minutes later she came back all in a huff and said “Marco, you got to come help me out! This old man kicked me out of the store and won’t let me in! I don’t understand why!” Off we went.

Sure enough as we entered the front door the old man was not far away talking to this lady. When he saw us in the store he turned and immediately started towards us. Flailing his arm and ranting loudly in Italian, he demanded that we leave. As we cautiously back out fearing for our lives I understood what he was saying: basically he was with a customer and would not be able to keep his eye on us to see that we did not steal anything, therefore we would have to wait outside until he was finished with her.

I’m sure most people would have left at this point but not us, because high on the wall we saw two jerseys hanging in frames, the Italian National Champion’s jersey and a yellow TdF jersey. This wasn.t your everyday bicycle store and we wanted to know more!

Now standing outside I called out as the old man walking back to his customer “We want to buy the yellow jersey hanging on the wall, how much is it?” The old man froze instantly as the blood rushed to his head. He turn back to us with the anger of 50 years still inside.

Flailing his arm again he said; “That jersey is not for sale and no amount of money can ever buy it!!!” In that instant we realized that those were his jerseys hanging there. We were hooked now and would not leave until we got the story. Oddly enough the old man – Aldo Ronconi – was hooked too; he wanted to tell us. He turned to me, now much calmer than before and said that his son was coming and that he would help us if we just waited a minute (not outside).

In the end we got the stories: how he was presented trophies by both Hitler and Mussolini; how he was robbed of the 1947 TdF title and later given honorary recognition as the true winner, first from Italy and later (last year, in fact) from France.

Aldo’s son told us that Aldo will talk as long as someone will listen. Unfortunately, we had to go. We asked if we could get a picture with him outside his store and he said sure. After, he said something I didn’t quite understand so his son explained. Aldo didn’t take the picture so that you could have one of him; he took it so that he could have one of you! He wants you to send him a copy. We turned to Aldo in disbelief; his son told us that Aldo admired us for our passion in the sport he too loved. As I asked Aldo for his address he immediately steamed up and started back into another rant “Just put Aldo, Faenza, Italy! It’ll get here!”