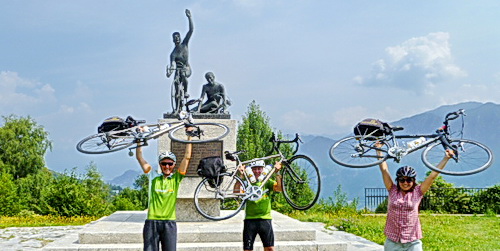 Several years ago a friend gave me a fridge magnet featuring the Madonna del Ghisallo – the Patron Saint of Bicyclist. I was 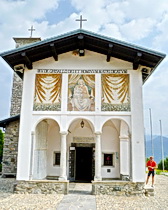 thrilled and immediately affixed the magnet to the top tube of my touring bike and felt as though suddenly someone was looking out for me. Was this the end of flat tires or the possibility of having an accident? I wondered if the ride would somehow feel different, would hills seem easier, would landscapes pop, would the wind always come from behind me? Though I realized that these were high hopes for a simple fridge magnet I found myself sitting a little taller in the saddle and each time I glanced down at the Madonna I couldn’t help but be amused at myself which meant that I did feel a little stronger, happier, and more adventurous.

Skip to the winter of 2012 and an ExperiencePlus! staff meeting to determine who from our US office would do which of our cycling tours in Europe. My first choice was the Italian Lakes District Plus! tour which offered the opportunity to visit, my friend and protector in her home – the chapel of the Madonna del Ghisallo. Thankfully, schedules meshed and I was given the go ahead to start planning – although not the Camino de Santiago, for me it would be a pilgrimage all the same. I knew very little about this area – and wondered if I really chose a trip simply because of a fridge magnet? I questioned myself and my “reasoning” but would learn soon enough that the Madonna had led me to a region of Italy that I would grow to love. 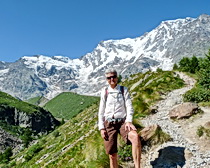 My traveling companion and I began the adventure with a few pre-tour days in the tiny hamlet of Macugnaga which is nestled in a narrow valley surrounded by the glacier laden Monte Rosa Massif, the second highest mountain in the Alps and western Europe.  Although I truly loved the mountains, meadows, German breads, and creamy polenta, the pull of my purpose for coming to this region began to strengthen and I was happy when the day arrived for us to make our way to Intra-Verbania, where the cycling tour would begin.

We arrived in Intra with plenty of time to ferry to each of the Borromean Islands. My

favorite was Isola Bella and its palazzo (palace) which featured a tiny hallway designed with a mirror set at just the right angle – it gave the illusion that you could walk down an endless hallway instead of running directly into a wall. Another favorite feature for me was the lower level of the palace which had rooms that simulate the sea – coral formations cover the walls, ceiling and floors. The rooms are kept cool even in the heat of summer with smartly placed windows that capture breezes from the lake. The gardens are magnificent with countless species of flowers, shrubs, sculptures, and gorgeous white peacocks that patrol the grounds. You can take a vicarious trip on the island through the magic of youtube.

After spending a little time on each of the islands we were back to Intra by 3:00 to get our bikes and meet the tour leaders. My journey towards the Madonna had finally begun and what a ride it would prove to be. Along the way we bicycled the shores of four of Italy’s famed lakes including Lake Como, made famous in the States because George Clooney owns a home there, and though we never encountered George it was clear why he choose to live in this area – it’s absolutely spectacular. The lakes are surrounded by mountains and picturesque villages punctuate the shorelines. There are countless opportunities to enjoy the water either by swimming in it, ferrying across it, or sitting at a quaint café enjoying the view as the sun sets behind the mountains. 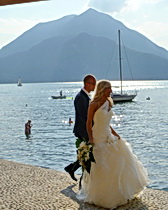 After touring in the beautiful and opulent lakeside shopping mecca of Lugano, Switzerland, I was ecstatic to know that we’d soon be in Varenna, which turned out to be my favorite stop on the tour – and not just because our second day here would allow me to finally climb the pass to Ghisallo. The Royal Hotel Victoria where we stayed offered fabulous views of Lake Como and Bellagio on the opposite shore. The staff were friendly and the rooms incredibly comfortable with all the modern amenities, and perhaps most important to me, they had scrumptious food for both dinner and breakfast! The village offered lakeside restaurants, small alleyways to explore, and lots of kids playing in the small main square. On our arrival we were lucky enough to see a beautiful bride and groom exit the church under a curtain of rice accompanied by the peals of church bells. A fairy tale end to a beautiful day of riding and anticipation for tomorrow – it would be THE day. 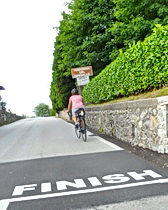 our ferry across the lake to Bellagio where we would begin our ascent to the chapel of the Madonna del Ghisallo. The steepest part of the ride came early as we slowly made our way from the lake shore. I couldn’t help but wonder if this was how it was going to be the entire way, but the grade quickly settled to a level I would expect for a mountain pass in the US. This area is obviously very popular with cyclists and we soon came to a section of pavement with ‘START’ written across our lane and as we continued to climb there would be regular reminders of how far we’d come and how much further we had to go. There was very little traffic, the road was in excellent condition, and if I had to search for something to complain about the only thing I could come up with was that it was a few degrees hotter than I would have liked. The Madonna was with me and she was making it easy. I was surprised to see the big sign for FINISH on the pavement just ahead – it seemed too easy, but sure enough there on the left sat a very small chapel. We waited for John so that the three of us could enter the chapel together. The interior was filled with bikes, photos of riders, bike paraphernalia, 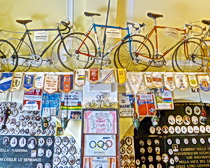 and a statue of the Madonna welcomed us with open arms from the apse. I’d made it and it was everything I’d hoped it would be!

We toured the nearby cycling museum and watched videos from racing history including one that focused on the history of women racers featuring Connie Carpenter, and French Champion Jeannie Longo among others. It was inspiring to see how far women have come in the past 30 to 40 years. It also left us wondering how many more years it will be before there is a sense of equality between men and women’s bicycle racing.

A short perusal of the gift shop (what…no magnets???) and we were back outside to take photos, chat with local riders, and 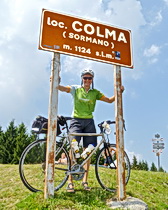 consider routes home. We decided on the long way back over another, higher pass. It was magical, the smooth pavement continued, we encountered encouraging cyclists, enjoyed cold water and snacks at a tiny shop at the summit before descending for what seemed like forever back to Bellagio. A short ferry ride had us back in Varenna just in time for an afternoon swim in Lake Como. Before I had the chance to consider how the day could get any better the tour leaders suggested a visit to the best gelateria in the area – oh my, they were so right. It proved to be the perfect appetizer to a fabulous dinner of salad, pasta, wine, and good company.

I went to bed satisfied, happy, tired, and laughed out loud when I realized that it was only Day 4 of the trip – I still had 7 days to ride in this fabulous area. I looked out the window and saw twinkling lights on the hillside where I imagined the chapel would be, smiled, said thank you, and slept like a baby.