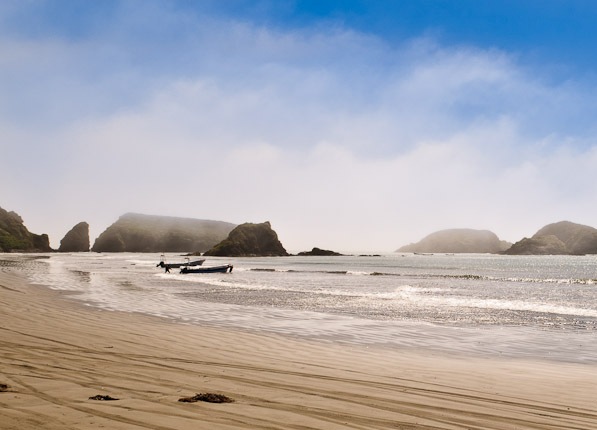 After our night in Petrohue, it was time to bid goodbye to two cyclists and a guide. Doug left to spend a few days in Santiago before he’ll return to Maine, while Lindsay headed directly home to Denver. Tika, our adventure-race-running guide, returned to Bariloche to join a MTB excursion through southern Argentina and Chile.

For the rest of us, continuing on the Pedal the Andes’ Chiloe extension meant hopping a transfer to the Island in the morning with Juan Pablo, our new Chilean guide.  While we all came to Patagonia to bicycle ride, the afternoon of sightseeing from the bus would prove equally memorable.

As the bus taxied off the ferry, the landscape changed. The farmers’ fields remained a constant; however, the rugged Pacific coast replaced the Osorno Volcano, which had been our constant companion since entering Chile. Surf crashed along the beaches and salt hung in the air as we made our way across the island.

After rattling across a gravel road, our bus drove through a small stream and onto the beach.  Reflective cycling jackets were discarded in favor of lifejackets and we took our places on either side of a beached boat. Four Chileans then expertly waited for a set of crashing waves to provide just enough lift to slide us out to sea and our captain skillfully jumped on board, lowered the prop into the water and sped off before the next wave pushed us back towards shore.

We cruised out to a set of three islands. As we approached, penguins began to materialize. First, we noticed a few near the waters edge, then more swimming near the boat. Finally, we spotted dozens on the islands, both Humboldt and Magellan, tending to their nests. Juan Pablo also pointed out other bird species – four different cormorants, a flightless duck, and a Patagonian goose – but we were all there for the penguins.

It would be easy to write about our excellent Hake lunch at a restaurant overlooking the Pacific, our Curanto dinner was the real treat.

Curanto is a traditional Chilote dinner server for large groups or parties. A big hole is dug in the earth and heavy stones line the bottom. After building a fire to heat the stones, the coals are removed and food is added – shellfish, pork, chicken, sausages, potatoes, and potato cakes. Rhubarb leaves are laid over the top to prevent the heat from escaping and the water from the shellfish steam the entire meal tender.

We enjoyed our first taste of this tradition on Maria Luisa’s rural farm. She welcomes tourists throughout the peak season, all of whom certainly leave with memories of her enthusiasm, terrific cooking, and authentic experience. 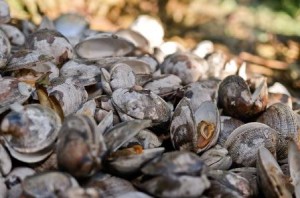 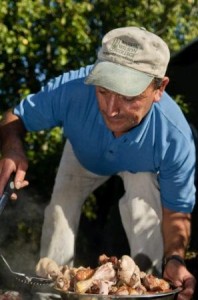 Our group was no exception. After a healthy second serving, an extra glass of wine, and dessert, we were all ready for the final bus ride to our hotel in Castro.

Jeff Bartlett - Jeff Bartlett is an adventure photographer and writer with two homes: British Columbia, Canada and Mendoza, Argentina. His work focuses on his two passions: exploring and protecting the wilderness. More of his work can be seen on his website (www.photojbartlett.com)