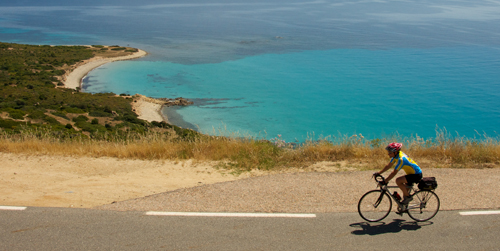 Philipp Alexander Schmitt leads our tours in Spain and Germany. We thought we would share one of the chapters from his book about hiking the Camino de Santiago in northern Spain for the first time. For those of you that aren’t familiar with the Camino it is a pilgrimage that is traditionally done on foot and there are dormitories strategically planced along the way. Philipp’s sense of humor comes through loud and clear and though the book is only available in German there is plenty of opportunity to enjoy more of Philipp on our Camino de Santiago cycling trips, August 28 to September 11 is the Roncesvalles to Santiago de Compostela, or September 4 – 11 León to Santiago de Compostela in both cases we

are happy to report that we stay in lovely, quiet hotels.

Before starting the Camino my heart filled with concerns and worries. It is the sleeping that worries me, sleeping in dormitories more precisely. Never being alone, locked in a room with strangers. I have never slept in a room with many people, except for a few years in school, but I don’t know if that really counts. I get somewhat uneasy about not being able to sleep. Or to put it in the right words, even I try to avoid myself when I haven’t had enough sleep.

Once on the Camino it went a lot better than expected. The first days in Aragon we had all shelters to ourselves. Then getting on the French Camino it got tougher and the shelters full. Later during the Easter week even fuller. Very often we just get the last bunks in the “albergue”. Happy about conquering the last bunk I go to bed and sleep. The fact that I am walking 8 to 10 hrs outside in the fresh air helps immensely, but often it is only because of my life saving ear-plugs that I can sleep.

Using these plugs so often one develops tricks to improve the application. E. g. if you wet them by licking them they kind of glide into your ears and perfectly seal them. I know, I know that sounds disgusting. But you are not hearing what I am hearing night after night. We are not in dormitories but snoretories. Snoring, snoring, snoring…

Involuntarily you are forced to experience and study that subject in depth.
Fact is:

with increasing age, weight and alcohol consumption the snoring increases exponentially.
Women snore less
You can distinguish snorers by their nationality:
Spaniards snore somewhat macho like and loud but always in a happy and fun way; French try to snore melodically and sometimes do succeed; Scandinavians make a good continual bass; Germans have something agitating and march music like to their snoring (unfortunately prejudices are again confirmed).

Female “voices” are a little trickier. German women eventually make a good alto and French often reach mezzo-soprano qualities, given that they haven’t had any wine for dinner. Spanish women are completely unpredictable, some of them have a bass that a Gregorian choir would envy. I believe it depends on the cigarette brand they smoke.

Having such a variety of voices I am tempted to get up at night and conduct a snore concert. Of course you can’t stand in the middle of the dorm and fumble with your arms, because nobody sees you. Instead you need to carefully whistle or gently shake the bed of the sleeper so he changes his position and his snoring. So I slink through the dorm and gently shake a bunk here, whistle into the corner motivating the French while I sneak between the rows of bunks looking for that English lady with the surprisingly beautiful snore to get her back on track, I kick against the bed of the German because we are missing a beat. Tonight the Scandinavians have had too much wine and are not very reliable. I ha

ve to silence them a little by throwing a stinking sock in their part of the dorm. Then there is this non-smoking Spanish woman who harmonizes gorgeously with some East European soprano. They work so well together I don’t have to take care of them at all. This was my biggest success in León, a dorm with 54 double bunks – 108 snorers! What a show… Of course I missed a little sleep, but it’s not every day that one finds such a well tuned snorechestra.

Sometimes you have snorers who behave like spoilt celebrities and don’t respond to anything, neither whistling, shaking, nor even a slap in the face. And of course they are always the ones who have zero musical snore qualities. Known and feared on the Camino as just such a snorer is Miguel, an American of Spanish origin. You can tell his capacities just by looking at his drunkard face and humungous nose. If you ever see someone matching Miguel’s description, no matter how far the next albergue is – you need to get keep walking.

A soloist like him sooner or later silences all other snorers. Then you realize that many snorers doesn’t matter that much. It is a noise like a river behind the house. But a solo concert is pure hell. And it gets exponentially worse if he sleeps in the bunk beneath you. In that case your ear-plugs are of absolutely no use. The bunks in the albergues are pre-civil-war military equipment made from fragile metal structures so snore-vibrations are perfectly transmitted, if not amplified.

For a few nights Miguel slept in the bunk underneath and just when I thought – it cannot possibly get any worse – there was further to go… He also walked the Camino over and over in his dreams. Just like dogs who kick in their dreams. My bunk was shaking like San Francisco in an earthquake. At first I thought sinful things were going on. But looking down I found Miguel all alone. I spent the next hour breathing into my belly button and hopelessly applying all east-western relaxation techniques. Then I gave up and started making up ways to torture him. Jamming a pillow on his face until he stopped kicking was the most innocent idea I had. In this long night I discovered some really dark spots on my soul. The next day and 20 kms later I saw Miguel limping into a small hotel asking for a room. Happiness like little bubbles of champagne rose into my head where they joyfully popped. My feet got light and I walked for another 10 kms. Of course, I do feel the obligatory guilt, but I believe the Camino will be penitence enough and I hope for forgiveness until I reach Santiago.