A Brief Introduction to Cycling Lingo

There is no need to buy a plane ticket to experience a new world  –  just take up a new sport. Consider cycling for example:  Ever been to the pain cave? Bombed down a gnarly, technical section full of babyheads? Been in the zone on a three-hour tour?

New cyclists might indeed feel as if they’ve landed in a spandex-clad new world. Learning biking techniques can be confusing enough without the accompanying lingo. If you don’t want to seem like a Fred or Wilma while mistaking a bike geek’s tricked out singlespeed for a niner, read on.

29ers, Fixies, Singlespeeds
First of all, let’s clear up a few bicycle bung-ups. There are several breeds of prominent steeds (bikes) in the bike industry. First off, the 29er, also known as the “Niner” or “Dos Niner.” These beefy bikes take their name from the size of their wheels:  Niners technically use 28.5” wheels, as opposed to most mountain bikes which use 26” wheels. So the name is a bit misleading as they wheels aren’t quite 29” – but who’s counting anymore? When 29” wheels were originally introduced in 1999 by Wilderness Trail Bikes, the trend didn’t really catch on. According to Wikipedia, although brands like Surly and Gary Fisher offered 29er models early on, the bikes still didn’t sell well. Finally in 2004, sales started rolling with the introduction of the Gary Fisher singlespeed Rig. Today, most everyone (even former critics like Specialized and Turner) have a 29er frame or three tucked away in the ranks.

Next up, the most confused duo on the road: fixies and singlespeeds.  Although both have only one gear, they are two separate entities. Fixies – also known as fixed-gear or fixed-wheel bikes – have no “freewheel.” In other words, when the rear wheel turns, the pedals turn in the same direction at the same time because the wheel is not free from the pedals. Singlespeeds have a freewheel and only one gear ratio, which means no derailleurs – and a challenge if any hills are involved! Examples of singlespeeds: BMX bikes, most childrens’ bikes, some city cruisers and the aforementioned Gary Fisher singlespeed Rig. 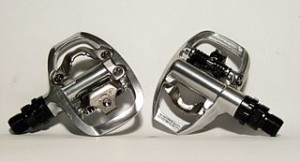 Another regularly confused item: clipless pedals. The casual or new cyclist would assume clipless pedals are the pedals without a clip. But alas, it is not so: clipless pedals, while misleading, are the pedals with clips or cleats that clip onto the soles of special biking shoes. There are a couple theories on where the name “clipless” originates. One theory states that when a rider is “clipped in” to the bike, the clips are no longer visible: the shoes appear to be clipless.

ExperiencePlus! bike mechanic Peter Field had another idea. “I thought clips were considered the strap and toe cage on a pedal,” Peter said. “They came first so when new clip-in pedals came, the pedal was called ‘clipless’ because the toe cages were removed.”

In any case, the most common of these probably is the Shimano SPD – and from there, any range of lightweight, newfangled and expensive clipless pedals bloom.

Cycling Shorts and Underwear
Before cruising into more biking slang, let’s clear up the relationship between one’s underwear and one’s chamois (the padded bike shorts used for cycling): there should be no relationship. The chamois (or shammy) is designed to work without an extra layer in between bum and bike seat. Underwear bunches and chafes, creating blisters and sores that bike shorts were designed to avoid in the first place.

Historically, bike shorts were made of wool with a leather shammy to reduce chafing from the saddle and protect certain sensitive areas. Today they’re made of spandex and special antibacterial padding. Avoiding underwear lines is commonplace with skirts and white pants – so do your bum a favor and avoid unseemly lines on the bike as well.
Without further ado, peruse further to delve into the amusing world of cycling, sans passport:

Aero: Aerodynamic – could apply to the neighbor’s sweet, aero time trial bike or your buddies’ super aero position, crouched over, hands in the drops as he bombs down Mt. Ventoux.

Baby heads:  Rocks in the trail that are… well, baby-head-sized rocks.

Big ring: The largest gear in the front set of gears, best for going downhill (the opposite of which is the small ring).

Brain: not yours — your bike’s! A cyclometer or bicycling computer that tells you your speed, distance, and much more depending on how much you are willing to invest.

Bubba truck: A driver who is rude to cyclists. Cyclists stereotype these drivers as someone who should be driving a large diesel pick-up. 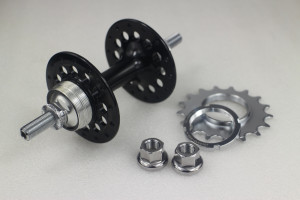 Cadence: The (hopefully smooth) rhythm of the crank arms (which attach pedals to bike) when pedaling –commonly called spinning.

Campy: Slang for “Campagnolo” an Italian manufacturer of bicycle parts and components. Tullio Campagnolo changed cycling in November of 1927 when during a race his frozen fingers were unable to remove his wheel to change his gears. He muttered, “Bisogna cambiá qualcosa de drio!” (something must change in the rear), he went back to his workshop and emerged with the invention of the quick release in 1930 and the derailleur in 1933.

To crank: Pedal like your life depends it – or to squeeze out some serious distance on a ride (“We cranked out some mileage today, boys!”).

Death ride: The kind that is supposed to be short and easy but ends up long. Headwinds and lack of proper quantity of energy food often included (See: pain cave).

Drafting: A technique for saving energy and staying out of the wind by staying in the slipstream behind another rider (or being “on their wheel”).

Drops/in the drops: The downward curving part of racing handlebars which facilitate an aerodynamic riding position – when you’re “in the drops” you’re getting aero. 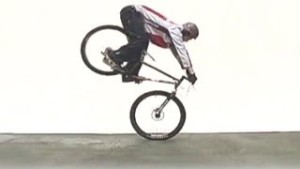 Endo: Flying over the handlebars – unexpectedly and against one’s will (short for end over end). Also known as a “superman.” BMXers know it as a front wheelie (when the end of the bike is in the air and it rests on the front wheel momentarily).

Fred: Someone new to cycling, regardless of age; also called “newbie” or “Wilma,” if the newbie is female.

Goo: Single serving energy food that provides simple yet sustaining carbs, sugar, electrolytes and perhaps caffeine (Cliff and Hammer make it, among others). And it has (you guessed it) a gooey consistency.

Granny gear: The lowest available front and rear chainrings… think about the gear you need to keep riding instead of walking up a mountain pass.

Grind, to: Used in tandem with “crank” but sometimes in a more negative sense (beginning cyclists often grind on pedals instead of shifting and spinning).

Hammerfest: A long, exhausting session of hammering often led by one individual or in a headwind.

Hard-tail: A bike with front suspension only (no suspension under the seat).

Hike-a-bike: What started out as a mountain bike ride and ended up a hike with too much gear.

In the zone: The euphoric state all riders strive to achieve while riding; biking Zen.

Jaunt: An easy ride; not a good verb to use while bragging.

Keep the rubber on the road/Keep the rubber side down: Don’t crash/be an idiot out there because you have a meeting tomorrow and you better look good (See: road rash). 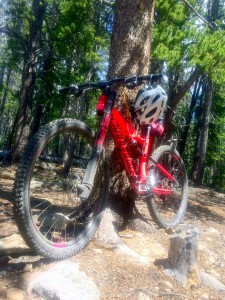 Lefty: Cannondale’s unique frame design that features one front for – the left fork.

MTB: Mountain biking, the act of.

No fall zone: A critical section (especially while MTBing) where a fall could result in serious injury and/or death.

Pain cave: The darkest hour of the ride, in which you must push through the torture or die. (See “the crux” below).

Peloton: The main group of riders near the front of a race.

Quick-release: Bolt with lever attached for easy adjustment of the seat height and wheel removal (known to bike geeks everywhere as “QR”).

To rally: 1. To come back from the dead/get your second wind, or do really well on a hard section; 2. To finally get started after procrastinating at the car, forgetting stuff and trying to get out of riding.

Rookie ring/chainring tattoo: While standing with your bike, the act of forgetting about it just long enough to receive a greasy, chainlike love bite from your chainring.

Singletrack: Mountain biking gold (as opposed to doubletrack trash – a jeep like road or trail), a trail just wide enough for one person (wheel) at a time.

Snot rocket: To accomplish this, turn head, take a deep breath, plug one nostril and blow – just make sure your buddies aren’t on your wheel! 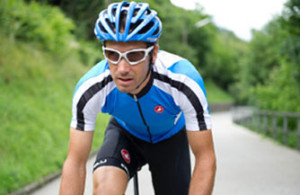 The crux: The hardest part of the climb, right after where you thought about dying (See: pain cave).

Three-hour tour: A ride that seemed like pie at the start but turns out to be a death ride (See: death ride). Derived from the theme song to “Gilligan’s Island.”

Ti: Slang for a titanium bike.

Tri-geek: A person obsessed with triathlons to the same extent a bike geek is addicted to bikes; a tri-athlete.

Throw down the hammer: To crank on the pedals suddenly, flying down the road like the cops are chasing you in a stolen car. Your buddies, stunned, just got dropped.

Tricked out: A bike decked out with the most expensive, high-tech and newest gadgets.

Tweak: 1. To injure part of one’s body, usually during an involuntary dismount (crash); 2. The act of adjusting something slightly in order to make it work again.

Used and abused: The feeling at the end of the ride, when you’re tanked, whooped or beat and ready to inhale three cheeseburgers, a milkshake and four large fries.

Very technical: A ride, trail or descent (or any section thereof) which requires expert biking skills in order to avoid endo-ing (See: endo).

Wall: Any road grade with a minimum of 10 grade/anything that goes straight up, seemingly with no end.

Wonky: Something strange on the bike or in the group dynamic (aka, “My tire feels wonky,” or “Ralph is acting wonky today… did he get any sleep last night?).

Lesson complete – hopefully those new to the cycling frontier will feel a bit more at home. Next time a spandex clad fat boy (muscular lad) rolls up (rides over) after you busted a gut (rode hard) to get out of the pain cave and pops a cork (makes a joke) about how fried (tired) you look, you’ve got it covered.

Have your own additions to the list? Email us.