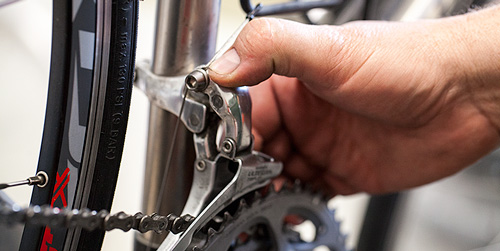 What are the key pictures you should bring back from your next trip? Photos that tell the story of your vacation – the people you met, and the places you visited.

If you’re anything like me it’s likely that you visit so many extraordinary places you don’t even know where to start taking pictures. Or, you just shoot away and hope some of them will be good.

Whether it’s a tour at a cheese maker’s workshop, a medieval village or Renaissance castle,  our bike tours are full of cultural events you’ll want to share with friends when you get home.

Here’s a technique I use to help me focus, and it gets me exciting results: I pretend I’m a journalist with a story to tell and need to get these three key shots. 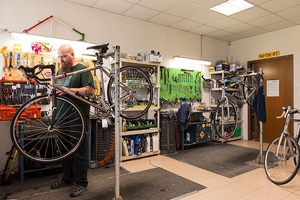 Set the scene for the viewer. Zoom out (or use a wide angle lens) to capture the environment. Make sure you have some key elements so we see at a glance where you are.

As an example, I want to tell you a story about our new head mechanic, Merlyn. I start with a wide shot of the workshop at our base in Italy: the Farm.

Merlyn arrived a couple of weeks ago to begin preparing our bikes for an intense season. Next week, he’ll be joined by another crack mechanic from England, Dave. Every one of our bikes gets a thorough check-up before every tour.

In this wide-angle photo, I want to show most of the shop. The tools and bike stands give the overall setting. 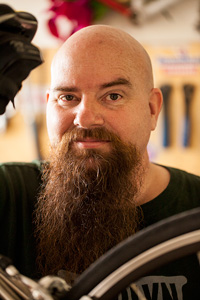 From his picture alone, you know Merlyn’s an interesting guy. His idea of a Millennium Tour? In 2000 he embarked on a round-the-world bike tour: 366 days, 250 cyclists, 45 countries on six continents, and 20,000 miles. Merlyn had just one other mechanic to help.

If you’re visiting an olive mill, winery, or a pottery shop on one of our cycling tours, you’ll have a great opportunity to get a stunning portrait. As always, only put what’s important in the frame. Here, I wanted Merlyn’s face (of course), enough of a bike he was working on, and the tools in the background to place him in the workshop. 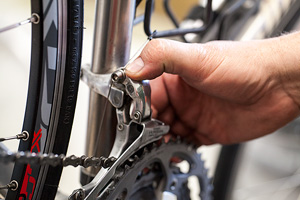 Get a close-up to fill in the story. Any visit will have plenty of options for detail shots.

In a winery it could be a case of wine. Oil flowing out of the tap is a good idea at the olive mill. And an artisan’s hands working are great.

That’s what I chose for Merlyn. Here he’s adjusting the front derailleur on a titanium road bike.

Keep shooting
As long as you cover these three shots, your pictures will speak for themselves. But don’t stop here – once you have these, your creative juices will lead to even more.