Argentine director and writer Damián Szifrón holds bragging rights for Argentina’s most popular film of 2014. His film “Wild Tales” was also nominated for the Oscar for Best Foreign film, as well 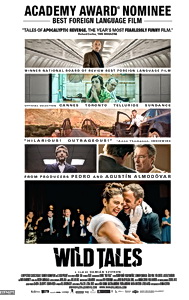 as, the Palme d’Or at the Cannes Film Festival. An anthology of six stand-alone short films that will shock you, make you laugh, cringe, and applaud.

Not for the faint of heart these films are about revenge, sometimes violent, often hilarious, and occasionally heartbreaking. It’s best if you enter the theater ready for anything and everything. Be ready to embrace a world where emotions are acted upon with “wild” abandon. It is best to avoid knowing too much about the films to let the experience wash over and surprise you, but here is a very brief introduction to each.

Wild Tales is an adventure into an absurd and vengeful world where the lines of morality are undeniably blurred.  A worthwhile night out for those who have a dark sense of humor, can embrace the outrageous, and tolerate violence.

Check out the trailer for the film here.