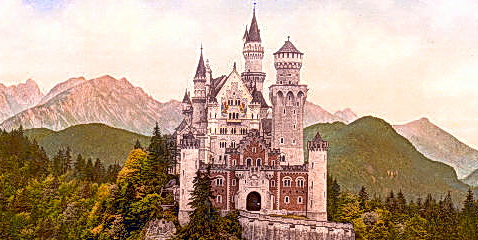 Oliver Pötzsch has taken time off from his Hangman’s Daughter series in order to address the real life mystery, albeit in fictional terms, of the death of “mad” King Ludwig II of Bavaria, the person responsible for building Bavaria’s most famous tourist attraction, Neuschwanstein Castle (the model for the Disney Castle and a destination along the ExperiencePlus!’ Bavaria’s Back Roads trip), as well as Linderhof and Herrenchiemsee Castles.  Ludwig died mysteriously, a strong swimmer who drowned in waist high water, along with the psychiatrist who had pronounced him insane.  Conspiracy theories abound, since there was clearly a movement among top officials and the nobility to rein in Ludwig’s profligate spending and bizarre lifestyle.  His spending nearly bankrupted Bavaria, although given the current success of his castles as tourist attractions, it was the best long term investment in Bavaria’s economic future ever made.

Pötzsch has done his homework, reprising virtually every serious and crackpot theory around.  The plot moves back and forth between present day and 19th Century Bavaria.  A present day bookseller comes into possession of the diary of a (fictional) close associate of King Ludwig written in code that purports to tell the truth about the death of the king.  Needless to say, there are all sorts of mysterious groups who are also interested in possessing the diary for their own purposes.  The bookseller and his new found associate (there has to be a love interest in these stories) stay one step ahead of the law and various mysterious and sometimes nefarious groups, while trying to decode the diary.  More and more of the diary is revealed to us they as they travel between Ludwig’s castles looking for clues that will help them decode the diary and solve the present day mystery of who is pursuing them, as well.  For ExperiencePlus! riders who want to learn more about the life and death of King Ludwig (in fictional form) while they pedal towards Neuschwanstein Castle, this is an entertaining way to do so.