The Leopard by Giuseppe Di Lampedusa

Reviewed by ExperiencePlus! Traveler and regular contributor to the Rambler Newsletter, Bill Giovinazzo.

In May of 1860 one thousand “Garibaldini”, or Redshirts, sailed from Genoa to Marsala to 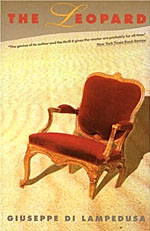 free the idyllic isle of Sicily from the Bourbons. Leading this group of volunteers was Giuseppe Garibaldi. Although he was proclaimed the “Dictator of Sicily,” this popular hero was fiercely dedicated to liberty and individual freedoms. This movement swept from Marsala north over the Straights of Messina to Sessa Aurunca where, in an act reminiscent of George Washington turning power over to the people at the end of the American Revolution, Garibaldi handed over power to Victor Emmanuel, King of Italy. These events were the beginning of Italian unification whose 150th anniversary is being celebrated in 2011.

ExperiencePlus! Italia 150 riders will conclude their celebratory 1,400 mile ride from Palermo, Sicily with their arrival in Torino on June the 3rd. If you have hopes to some day join this tour, or any ExperiencePlus! bicycle tours of Italy, this is the year to be inspired by Giuseppe Di Lampedusa’s “Il Gattorpardo” (The Leopard).  Beautifully written, “The Leopard” is recognized as one of Europe’s 20th century classics. What makes the book so amazing is that it couples great historical and cultural themes with personal situations that have great resonance to the individual reader.

On the one hand, “The Leopard” brings to light the still unresolved problems of Italian unification. It gives insight to the malaise that has gripped the Italian people who struggle over the future direction of their country. It does this through a portrait of a once great aristocratic Sicilian family dealing with how unification is transforming of their world.

On the other hand, as we look more closely at this portrait we see ourselves in their faces. There are those who will see in themselves Don Fabrizio, the Prince. Who, looking up at the stars, knows that his time has past; knows that the vitality of youth is well past its ebb. Others will see in themselves the impetuous Tancredi for whom this new world holds nothing but a promising more prosperous future. Still others will relate to the passion between Tancredi and Angelica, a woman whose sensual fecundity exudes from every page.

If you are going to Italy this summer, or if you are simply interested in reading a very good book, I recommend Giuseppe Di Lampedusa’s “The Leopard.”