If you are looking for an adventurous and entertaining tale about cycle touring, The Lead Goat Veered Off fits the bill. If 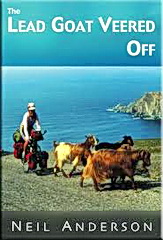 you’ve been to Sardinia or plan to head there in the future you’ll love Neil Anderson’s vivid descriptions of the food, landscapes and people that he and his wife Sharon meet on their lengthy journey. It’s simply a great ride and you’ll laugh most of the way despite headwinds, the heat, the cold, and the lack of food, or in some cases, its overabundance.

It is also easy to relate to the story, which adds to its humor. If you have ever traveled to a place where you don’t speak the language you’ll certainly appreciate Neil and Sharon’s tales of woe and victory as they struggle to understand and be understood.  They are grateful, as any non-Italian speaker should be, that Italians are so adept at charades. Neil is perhaps a bit too self-congratulating when he believes, albeit for just a moment, that he’s completely understood a conversation with an elderly gentleman. Upon further consideration he begins to doubt himself… “He pointed to his cane and held up three fingers. I’ve had this cane for three years,’ he was saying. Or maybe it was his third cane. Or maybe he had killed three cats with it.”

Later in the book they meet a woman who tells them that she is going to speak like a Canadian and not gesture with her hands. Neil asks for directions and she immediately points the way and everyone laughs. She secures her hands in her armpits and nods that she is ready to try again, within two words her hands are back in action. Finally she sits on her hands, which silences her as effectively as a duct tape gag, after a moment she exclaims that it’s just too difficult.

Thankfully most of us have the sense to avoid bicycle touring in Sardinia in the winter so you’ll need to tap your imagination to understand how it might feel to spend two days huddled in a tent encapsulated by a foot of snow with no food or water.  Instead of fighting or getting grumpy Neil and Sharon actually seem cheered that they have a break from the howling wind, and that the snow can be melted for water and they still have hot chocolate.  This along with a plethora of other examples proves that a sense of humor is an invaluable asset for any adventure and Neil and Sharon are extremely wealthy in this regard and their story will inspire you to be your own lead goat and veer off.

There are additional photos and stories available on their blog.