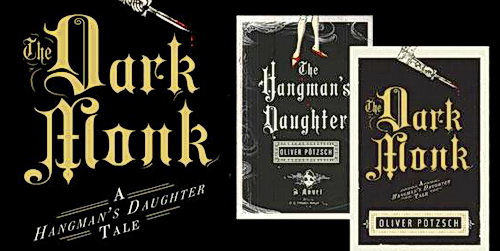 The Hangman’s Daughter and the sequel The Dark Monk, originally published in German to wide acclaim, were written by Oliver Pötzsch, the descendent of a long line of hangmen, including Jakob Kuisl, the protagonist in both mysteries.  The action takes place in the small Bavarian town of Schongau and its surrounding towns in the 17th Century.  What may be of particular interest to ExperiencePlus! travelers is that Schongau, which still exists, is about midway between Landsberg am Lech and Füssen, right along the route taken by the ExperiencePlus! Bavaria’s Back Roads tour.

The author has taken extra care in his historical research about hangmen, medicine, and everyday life  in 17th Century Bavaria, as well as contemporary research about the places named in the books, so as to even provide tourist information (at the end of The Dark Monk).  The little Church of St. Lawrence in Altenstadt is still there (although it is now a farmhouse), as well as the Basilica of St. Michael, with its huge crucifix “ the Great God of Altenstadt,” the Wessobrunn Monastery, the Rottenbuch Monastery, the Steingaden Premonstratensian Monastery, and the castle ruins of Peiting. The bill of sale for the church from the Grand Master of the Templars mentioned in the book still exists.  And the Schleyer Falls, which are hard to find, are exactly as described in the book, according to the author, who bicycled and hiked through the area to provide an accurate background for his novels.  The action takes place as far north as Augsburg, in Landsberg, and in the towns surrounding Schongau, as well as in Schongau itself.

The mysteries each begin with a murder, and while I don’t want to spoil the ending, I can say that The Hangman’s Daughter involves superstitious villagers suspecting  there was witchcraft amongst them, while The Dark Monk involves a search for Templar treasure.  There are, of course, all sorts of twists and turns, as befits the genre, making for successful mysteries, along with information about the times, as is standard in historical mysteries.  The main characters (Jakob the Hangman, Magdalena, his almost grown daughter, and her lover, Simon, the son of the town doctor), all have very modern personalities, as is once again typical of the historical mystery genre.  The hangman is “the Hangman with a Heart of Gold,” just like the stock character, “the Prostitute with a Heart of Gold” found in 19th and 20th Century novels, and, of course, he doesn’t believe in witchcraft and practices modern medicine.  Both Magdalena and Simon have medical opinions that would be progressive in the late 19th Century, and Simon even accidentally stumbles on a healing mold that can only be penicillin.  Despite this, or maybe because of this, the mysteries are page turners and quick and fun reads.  Another in the series, The Beggar King, is expected to be published soon.