The Emperor and The Saint

Frederick II of Hohenstaufen, Francis of Assisi, and Journeys to Medieval Placesm by Richard F. Cassady

As the Foreword states, this book is the biography of a “giant” who traveled, ruled and fought across most regions of 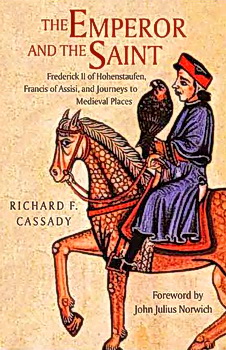 medieval Europe and the Holy Land. Frederick II, was born in 1194 and died in 1250. He held the titles of king of Italy, Germany and Jerusalem and emperor of the Holy Roman Empire. Frederick was called “wonder of the world,” thanks also to his other numerous talents as an intellectual, including a good knowledge of philosophy, astronomy, medicine and geometry, his fluency in six languages, including Arabic, and his authorship of a book on falconry and of numerous poems.

The relatively shorter biography of Francis of Assisi, interlaced with that of Frederick II, is an interesting complement to the emperor’s life story. Both men shared the ideal of a world in which the emperor dealt with secular issues and the Church, cleansed of corruption and worldly cares, dealt with spiritual concerns. They faced, however, the reality of a papacy bent on retaining and even expanding the church’s territorial holdings and preventing the union of Italy and Germany under the imperial crown.

The book is divided in chapters marked by a year-by- year recount and commentary of Fredrick’s life events. What makes the book and the biography particularly interesting and original is the author’s description of each place visited by the emperor. This is done by identifying the historical origin of each location, and then describing in detail the monuments – churches, palaces, castles – that Fredrick probably saw or visited in that particular place. The author has a refined sense of the art characteristic of the Romanesque period and effectively conveys its beauty and its details to the readers. The mention of a special food or some contemporary aspect of the village or town described brings the place to modern life and relevance. We are therefore taken from many places in Sicily, where Fredrick’s Norman ancestors left many castles and towers, to Apulia, or Puglia, where Frederick himself built several defensive castles and founded the city and fortress of Lucera, in which he settled his loyal Saracen guards and their families. Castel del Monte, near Andria, is a castle whose geometric shape and astronomical references have puzzled scholars for centuries and testifies to Frederick’s deep interest and knowledge of these subjects.  While Frederick did not found abbeys or cathedrals in his domain, he built many hunting lodges and castles and in Naples he founded a prestigious University.

Our author gives us detailed descriptions of the history and monuments also of cities in central and Northern Italy, with especially long descriptions of Ravenna, Parma, Pisa, Verona and Piacenza. He also takes us to several places in Germany, the ancestral birthplace of the Hohenstaufen, and gives us detailed information of the cathedrals, monasteries and castles of Worms, Strasbourg, Colmar and Marburg.

While mentioning Frederick’s wives- at least three and maybe four-  and the fact that he had a harem of concubines and therefore several illegitimate children, the author does not give us a complete portrait of the man’s “private” sphere, may be because those details were not easily found in the extant documents. He tells us, however, about Fredrick’s political relationship with some of his sons, such as the rebellious Henry, and the beloved Manfred and Conrad.

Anyone who enjoys reading about history, Romanesque Art and two of the great figures of medieval Europe will enjoy this book! I did!