When we rode across Italy we cycled over roads and through towns that were thousands of years old, 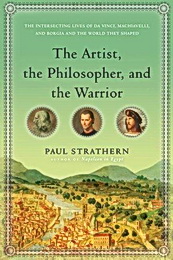 areas that have seen the rise and fall of empires, invasions by foreign armies, and the emergence of movements both religious and secular. As we ventured through Northern Italy, we were passing through the birth place of the Renaissance, a revolution in thinking without which our world today would not have come into being.

Three luminaries of this time were Da Vinci, Machiavelli, and Cesare Borgia. One could not truly understand the Renaissance without understanding the contribution made by each of these men. What I did not understand prior to reading this book, however, is the influence that each had upon the other. To look at these men as individuals is only part of the story. Strathern brings out how their lives intersected and the effect this had on their thinking.

As I read “The Prince,” I see Cesare throughout. I cannot help but wonder if we would call Machiavelli the father of political science if he had not known Cesare. I wonder about Leonardo and what would have changed in him if he had not witnessed Borgia’s brutality. What if Galileo had access to Da Vinci’s notebooks? Then there is Cesare himself. What advice did Niccoló give to him? If he had understood the lessons in “The Prince” would he have succeeded in uniting Italy? How would that have changed the world?

To truly experience another country, one should try to understand its history and the evolution of its culture. With Italy there is so much. There is such a rich, full culture that it is hard at times to absorb all of it. One period of great interest is that time in which Italy gave birth to the Renaissance, and to appreciate three of the main characters of that time, I would recommend that you read “The Artist, the Philosopher, and the Warrior.”