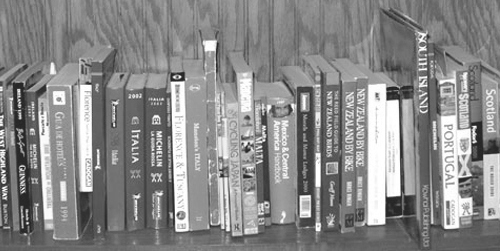 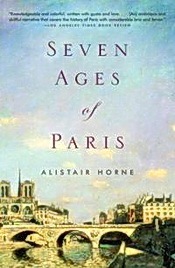 If you have visited Paris, or plan to in conjunction with a bike ride through France, this is a must read.   Alistair Horne is a prolific British writer who has authored a number of works on European history and particularly French history.  His “Seven Ages of Paris” is a fascinating tale of the origin, growth and flourishing of the “Ville des Lumieres” (City of Lights). Beginning with the first century BC settlement of “Lutetia”, the Roman colony on the Ile de la Cite, we are taken on a detailed journey through the ages.  Along the way, the author reveals a deft hand in describing the rich, colorful tapestry that has made Paris one of the grandest cities on earth.

You’ll need to brush up on your French or at least have your translation dictionary handy to fully understand some of the French words and phrases used in the book.   Also, a city map will be of great help. But do not be deterred; the time travel will be most rewarding. The movers and “shapers” of French history are the main characters in the story of Paris: kings with familiar names –  Charlemagne, Louis, Philippe Auguste, Henri, Richard, Charles; popes and priests; saints Louis and Jeanne d’Arc; Emperor Napoleon and President De Gaulle.  Upheavals, like the Revolution, the Commune, the Great War, World War Two and the Occupation, and the war of Algerian independence, all play supporting roles.  Plagues, sieges, famines, mob violence, assassinations, affairs, coups, and wars are also recounted. Even the construction by successive regimes of the walls, the palaces of the Louvre, Tuileries and Versailles, the boulevards, the monuments and the sewer system are presented.

The author masterfully incorporates the story of common Parisians as they often struggle to live their lives against the backdrop of great events.  He includes the artists, writers, composers, and scientists who both influenced and were influenced by the dynamism of a great city in the making.  Voltaire, Hugo, Balzac, Toulouse-Lautrec, Cezanne, Bizet, Berlioz, Curie, Josephine Baker and Brigitte Bardot all get in the act. The Paris of fashion and style is also reviewed throughout the “Seven Ages”.
This book covers so much ground in its 442 pages, you’ll think you are reading a multi-volume work.  For the adventuresome, the stories will shape that next trip to the “City of Lights” because you will want to visit those intriguing neighborhoods and monuments Alistair Horne told you about!  Vive Paris!