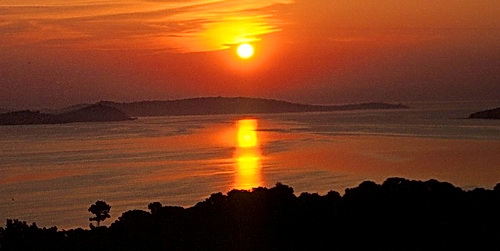 More than four decades after he lived and worked in Corsica, John Hanson Mitchell writes of his time 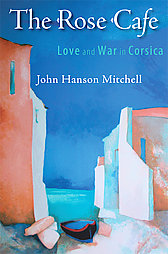 living on the Mediterranean island at the age of twenty.  He describes his youth as a successful disguise of being a student in Paris, spending most of his time in cafés or bars feigning expertise of literature and politics, while waiting to be miraculously transformed into a writer.

After spending some idyllic days at the Rose Café outside the town of Ile Rousse in northwest Corsica, he accepts an offer to stay on and work at the café for the busy season.  The café’s owner explains that Mitchell’s lack of legal work papers does not present a problem as no one would consider it real work, and that Corsica is “not well-known for its allegiance to the laws of the continent”.  So starts Mitchell’s duties as dish washer, sweeper, and daily gatherer of fresh seafood from the harbor; and his immersion with the café owners and guests, as well as the town locals.

His memoir transports the reader back to the early 1960’s when the United States was fighting the Vietnam War, France was involved in the Algerian War of Independence and Spain was under the dictatorship of Franco.  In addition, much of Europe was still recovering from World War II.  While Mitchell’s writing is not a war-story, this background helps explain some of the characters and their reason for being in Corsica.

Mitchell has the ability to convey his life at that time, along with the pulse of his part of the island and the people associated with it. While sitting at the Rose Café he observed the activity of the harbor and wondered what secrets were being kept in the dark of night. At the town plaza he watched the local boules players keep routine and order to their lives by meeting each day, and when heading to the interior of the island he admired the maquis, the aromatic scrub vegetation of the foothills that was prominent in his Corsican lifestyle.  And when he acted like a writer and asked too many questions he was sometimes reminded by the locals to not worry about things and just be.

Joeann Gutowski - is the "Voice of Reason" or Business Manager at ExperiencePlus! She and her husband Bob look forward to any vacation that includes time on the bike and she also enjoy visiting museums. When not in the office she enjoys cycling, yoga, digging in the garden dirt, reading, and spending time with the family dog. Believe it or not she also finds chopping wood at their mountain camping spot to be a fun activity. You can email her at Joeann(at)ExperiencePlus.com.