Anybody who was gripped by The Da Vinci Code by Dan Brown will enjoy this well-researched, 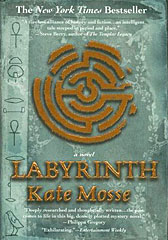 historical novel by British author Kate Mosse. While there are similarities between the two books, there are also several differences, namely that Mosse’s book is historically much more accurate than Brown’s. Labyrinth has two parallel plots with two female protagonists that take place in the 13th Century and 21st Century respectively and is set in southwestern France, especially around the fortified town Carcassonne.

The book revolves around the Albigensian Crusade, something I knew very little about but which actually shaped France’s history quite a bit. Both plots in the book originate in 1209 in Carcassonne, the quintessential medieval fortified town which our new 8-day Cycling Languedoc, and 11-day Plus! French Catalonia bicycle tours will visit. Many of the inhabitants of southwestern France were recognized as Cathars or Albigensians, a Gnostic sect or religion that challenged the material nature of the increasingly rich Catholic Church. Mosse takes liberties in imagining the origins of Catharism although, to be fair, since so much was destroyed during the Crusade, not everything is known about this religion that has since disappeared.  The book does a fantastic job documenting the impending arrival of the northern French who, backed by the Pope to rid the region of this new heretical sect, are very interested in the land grabbing opportunities presented. The subsequent 20 year war in the region around Carcassonne, Béziers, and Narbonne essentially wiped out the Cathars, and placed the entire region in control of northern French nobles which resulted in the near extinction of the Langue d’Oc (or language of the south), making the Langue d’oïl (language of the north) the ancestor to the modern French language.

This historical setting provides the background for the 13th Century protagonist Alaïs whose mission throughout the crusade is to protect sacred items. This historical setting also provides the background for archaeologist Alice Tanner who, in 2005, discovers skeletons in a forgotten cave in the Pyrenees. As the two plots unfold and link together, the science fiction or fantastical aspects of Mosse’s writing are intertwined with historical facts woven into the stories. There is plenty of tension as evil characters eager to thwart both Alaïs and Alice abound, as do intriguing twists and thriller-type action. I’m not generally a reader of thrillers or of Holy Grail legends but this book fascinated me both because we now have a ew bicycle tour in the region and because the historical component helped anchors the sometimes fantastical story.

I highly recommend this book to those who like historical fiction, while Jonathan Hancock, our Country Coordinator for France, and tour leader Michele Boglioni encourage you to read The Albigensian Crusade by Jonathan Sumption if you are into historical non-fiction and want to learn more about this period or region of French history.  Regardless of which book you read this region of France, just north of the Pyrenees and made up of the important Roman and medieval cities of Nîmes, Carcassonne, Narbonne, Béziers and Perpignan is a fascinating one—come discover it with us by bicycle!