It’s All About the Bike: The Pursuit of Happiness on... 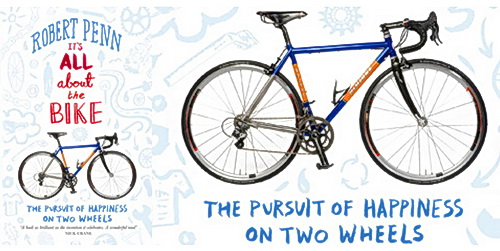 There are those that build bikes, those that write about bikes, and those that write about building bikes. A book like that runs the risk of having strictly niche appeal for the hard core. When I picked up “It’s All About the Bike: The Pursuit of Happiness on Two Wheels,” by Robert Penn, it was with some trepidation. As a cyclist who gets intimidated by even the mild gearhead language in Bicycling magazine, I wasn’t sure how I’d do with a book on building the ultimate bike.

However, I was pleasantly surprised. The author uses historical reference, personal anecdotes and clear explanations to unlock the exclusive language of bike parts. Each chapter chronicles major components: the frame, handlebars, drivetrain, wheels and saddle. Admittedly, some chapters are a little slow (near the end, he tends to ramble about bike paint), but others are fascinating.  For example, the ubiquitous diamond shape bike frame has virtually been untouched since it was created by John Starley in 1885 (materials and angles are another story). Early bikes had no pedals, pushed along only by your legs, like a child’s toy. What’s more, when the first pedals were finally attached, it was to the front wheel, making it impossible to steer. Bike balance, which came later, can only be maintained due to the free turning front wheel (who knew?) which was made possible by simple ball bearings. I read twenty pages about the invention of ball bearings, mesmerized.

The book is filled with helpful illustrations that help guide the reader. However by chapter four, I found it far more useful to read the book with my bike in front of me. For the first time, I noticed how the headset moved, how spokes were threaded. The bike came alive in a way I had never bothered to see before. Under Penn’s tutelage, the language of components became accessible and with it, a new dimension of cycling opened itself before my eyes.

Sadly, Mr. Penn does leave some mysteries unexplained – such as the development and discussion of cantilever (v-breaks) versus disc brakes. Secondly, there’s really not much of a plot (spoiler: he gets a new bike in the end). However, this book was oddly captivating, if not downright informative. The author sprinkles just enough history, quotes and background to make you feel you’ve accomplished something, if only a boost in confidence and perhaps hovering over photos of bike parts just a bit longer.