Into Thick Air: Biking to the Bellybutton of Six Continents 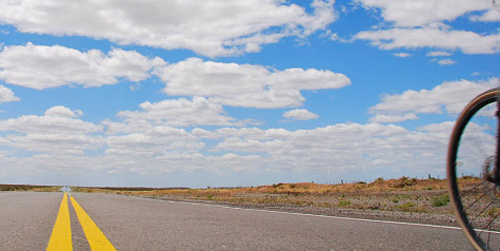 In “Into Thick Air: Biking to the Bellybutton of Six Continents,” author Jim Maluso sets himself up as an anti-hero who, instead of aspiring to climb to the highest points on this Earth, dreams of bicycling to the lowest depressions of the world. Ironically, I was in thin air leading our ExpeditionPlus! group of bicyclists across the High Andes while reading his book—would Maluso scorn us for aspiring to pedal at altitudes of 4000-4800 meters above sea level while he was searching for below sea level elevations? I figured not since we were both doing things few people (or none in his case) had done before, both riding our bikes in improbable places.

Maluso’s writing reflects his wanderlust spirit, botanist training and journalistic expertise. He begins his book with entertaining preparation stories as he readies himself for his first journey to the “bellybutton” of Australia. Sponsored by Discovery Online, one of Maluso’s most amazing feats throughout his travels is that he is able to figure out how to beam pictures and stories back to his editors as he travels through places where telephones don’t exist and, at times, electricity is a rare commodity.  Perhaps the most daring exercise he undertakes is smuggling his satellite phone into Israel on his second journey, his quest to bicycle to Asia’s lowest point, the Dead Sea in Jordan. Thorough searching of 3 of his 4 panniers tranquilizes the Israeli border guards who abstain from searching his fourth bag, the one carrying the illegal sat-phone….needless to say, luck is always a major component on these types of trips!

He undertakes each of his 6 journeys over 6 years, following Australia and Asia (really the Middle East since he starts in Cairo, bikes through Israel and finishes in Jordan) he pedals to the Caspian Sea in Russia, salt flats in Argentina’s Patagonia, Djibouti in Africa and Death Valley in California. His book is not a detailed travel journal, which is both refreshing and some what unfulfilling. Refreshing because reading a diary of a person’s daily life on a bicycle can get old, especially when many days are made up of breaking camp, pedaling, setting up camp. Instead, he focuses on personal encounters with people, interactions with nature and funny stories and conundrums in which he finds himself. I found the brevity of each journey slightly frustrating; except for the Africa and Death Valley sections, there was little reflection on what his traveling meant. The first four trips were more descriptive and were the only four of the six that were sponsored. Perhaps Maluso had already written exhaustively on the first four trips and only used “Into Thick Air” to express his emotions and sentiments about the last two trips he undertook.

This is not to say that the first four “anti-expeditions” were uneventful or uninteresting; in fact, some of the events that most struck me took part in these sections. Maluso’s humorous writing style definitely made the book (as he prepares for his first journey he discusses the dangers of bicycle touring; one of them being “the chronic threat to a bicycle traveler of being mistaken for a Mormon missionary”). I also appreciated his raw humanity; he addresses cultural sensitivity and political correctness openly when he contemplates whether or not to climb Ayers Rock in Australia, considered a sacred site by the natives. He admits that he “likes diversity—until it gets in my way.” (In the end, he chooses not to climb the rock which is over-run with tourists.) Although his (and our!) very mode of travel, the bicycle, is a soft impact on nature, it’s always important to remember the effects that tourism has on local cultures and environments!

I was interested to read his South American “anti-expedition” which follows part of the ExperiencePlus! Coast to Coast Expedition across the Rio Chubut and Patagonia and part of our Pedaling the Andes tour around Puerto Varas and Bariloche. Unfortunately, his lasting memories of the Andes, the Lakes District and Patagonia are much more negative than mine as he had horrible weather and winds as he crossed the low Andes and lakes to Bariloche. He eventually arrives at the Peninsula Valdes and one of Argentina’s many salt flats, the Salina Grande, which, until recently, was considered the lowest point of South America but has since been demoted to the second lowest point after another locale 500 miles south was “lowered” to first place.

Maluso’s genius is his characterization of the people he meets; his personal interactions with everybody are a highlight in his book. He meets people from all walks of life from Saudi head-banging drug dealers to surly hotel keepers to pleasant bar tenders and restaurant owners to friendly bureaucrats to French Legionnaires to unfriendly refugees. I was most touched by his experiences in Djibouti, where tourists are very rare, and nearly everyone asked him why he was there. Other than one young man who threatened to steal his bike if he did not give him some money and a few Ethiopian refugee children who threw rocks at him when he went by, all who learned that he was “just traveling” to see the country were amazed and then pleased that somebody would take the time to visit their miniscule country. His reflections about traveling to Djibouti, a place he had never heard of or ever contemplated visiting began with trepidation and ended with wonder at the hospitality and generosity of such a poor and conflict-ridden nation of people.

“Into Thick Air: Biking to the Bellybutton of Six Continents” is a wonderful testament to traveling by bike and while I was not riding in remote areas of Russia or Israel, my journey across the High Andes left me with the same sense of fulfillment. After all, on your bicycle you are vulnerable, exposed to the world and are often viewed as a curiosity, someone to figure out, someone who is often considered quite crazy and in need of instruction, food and shelter. Maluso’s book is great entertainment for anybody, but will speak most to those who travel as he does inching (or flying, as your pace determines) along on two wheels fully experiencing the road as scents and sounds are amplified by the feeling that you are immersed in everything.