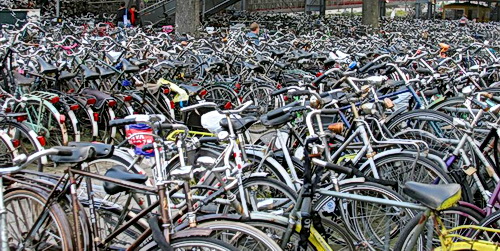 Here’s a book to add to your collection about bicycle history and advocacy.  Don’t get me wrong, Pete Jordan’s book about the history of cycling in Amsterdam doesn’t rank among the classics like David Herlihy’s Bicycle: The History or John Forester’s Effective Cycling but it is up there as entertaining reading for bicycle advocates and aficionados on the order of Joyride, by Mia Birk or Pedaling Revolution by Jeff Mapes.

Pete Jordan is as eclectic an author as they come based on what I know of him from his first two books.  He made a name for himself writing a blog or “zine” as “Dishwasher Pete,” and eventually published a book, Dishwasher: One Man’s Quest to Wash Dishes in All Fifty States (2007).  By Amazon.com’s account the book received 4 star reviews (out of 5) from 45 readers over time.  Not bad for washing dishes (as I understand it he only made it to 33 states before quitting.)

So now we have his 2013 book written as an observer and researcher of the bicycle scene in Amsterdam where he has lived since 2002.  Amsterdam, as you may know, ranks with Copenhagen as one of the world’s great bicycling cities.  Jordan moved there in 2002 to study urban planning as a “non-traditionally aged” American study abroad student.  He did this after living in Portland, Oregon a city reputed as being one of the best, if not the best bike town in the US.

As Jordan found, there is no comparison between bicycling in Portland and Amsterdam where, in the former, he was delighted to count 19 cyclists in 30 minutes while a year later in Amsterdam that number jumped to 19 cyclists every 30 seconds!

Jordan is not a scientist nor is he a historian but he loves to read about bicycling and accounts of bicycling observed by others.  Hence, his book is almost an encyclopedia of newspaper reports and eyewitness accounts of visitors to Amsterdam as they recount bicycle stories over the years. Yet he begins with his own experience in 2002 when the bike he bought for his wife was stolen from the sidewalk in front of a café where he was “keeping his eye on” the new acquisition.   This leads to a lengthy description of the pervasive problem of bicycle theft throughout Amsterdam where, on average, by Jordan’s account cyclists can expect to have one bike per year stolen.

It seems, according to Jordan, that bicycling is anything but new to Amsterdam.   He goes back in time to the golden era of cycling in the 1890s, carries his narrative on through to the flooding of the Dutch bicycle market with cheap German built bikes after World War I and on to a lengthy description of bicycling and bicycles during the German occupation of WWII.  Decade-by-decade he brings the reader into the 21st century claiming to still be fascinated with Amsterdam, with bicycles and with bicycling.

A fun read for anyone interested in the history of bicycling.