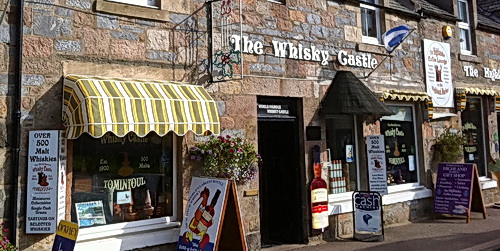 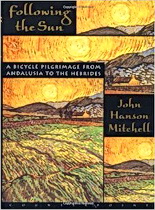 Following the Sun is a story of a cycling journey by author John Hanson Mitchell, a self-professed sun worshipper, beginning in southern Spain riding through Andalusia and western France to England and on to Scotland and the Outer Hebrides.  Mitchell departs from the port city of Cadiz on the temperate Mediterranean coast on the vernal equinox, the first day of spring, with a goal of pedaling 2100 miles and arriving at the much less temperate and wildly beautiful Hebrides by summer solstice.

Along the way, Mitchell discusses sun-worshiping cultures throughout history in Europe and the world.  He also provides a well-informed guide to geology and the flora and fauna of the areas through which he travels.

This solo travelogue describes the many people that he meets along the way.  As with any good travel journal, the best stories involve side trips and unexpected byways of the journey.  Mitchell meets up with an old friend from Madrid who insists that his heart’s desire is to accompany Mitchell on at least one leg of his trip.  Against his better judgment, Mitchell agrees to have his friend Griggs join him on the ride.  As for Griggs, and as many of us may have experienced, his mind makes a promise that his body can’t fill.  After five or ten miles of easy pedaling, Griggs is ready to call it a day.  As well intentioned as the day begins, Griggs quickly retires to a café or restaurant for a nice lunch and a glass of wine. Griggs does enjoy his café sitting which is not a bad place to watch the world pass by.

A recurring theme of the journey is a question raised by many locals that Mitchell meets as he travels northward, “Why would you ever want to go to Scotland?”  This may seem like a reasonable question coming from warm and comfortable Spaniards.  As he proceeds to cross Europe, the question continues to come up and becomes more pointed the closer he gets to Scotland.  A helpful innkeeper at a B&B in England questions Mitchell as to why he would ever want to travel to Scotland. Without giving away too much, she provides as disincentive a rather hair-raising and colorful description regarding the Scots, as only an Englishwoman might express it.  Actually her description may rather provide further incentive for the adventurous.

Mitchell paints the landscape of the west coast of Scotland and the wildly beautiful Hebrides as only a touring cyclist can describe it.  One can feel his pain and exhilaration as he cycles and pushes his bike against the wind and up hills through the lovely barren coast, the glens and mountains, the green valleys and wide moorlands.  He ends his story but not necessarily his journey at the standing stones of Callanish, Isle of Lewis on the longest day, summer solstice.

On one final note, I came upon the author, John Hanson Mitchell, after reading The Rose Café, a story of the author’s early development as a writer during a time in the 1970s when he escaped Paris and further commitments at home in the U.S. for a sleepy but beautiful coastal village, L’Ile Rousse, on the island of Corsica.  The Rose Cafe is highly recommended and has been reviewed in The Rambler by Joeann Gutowski.