As you anticipate your bicycle travel adventure you would do well to prepare by reading some of Dervla Murphy’s bicycle narratives.  I can’t think of a better way to “gear up” for your own adventure (besides taking some training rides, of 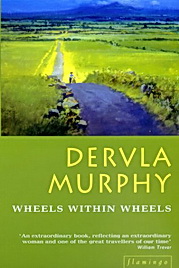 course.) Since 1965 when Murphy published her first bicycle touring book, Full Tilt, the narrative of her ride from Ireland to India in the early 1960s, she has published twenty books, at least ten of them about her bicycle travels.  Others include her travels or residence in Cuba, southern India, the Karakoram Mountains of Northern India, Northern Ireland, Gaza, and more.

Before you pick up one of Dervla Murphy’s travel books, though, you should read her autobiography which she wrote in the late ‘70s during a period when she could travel little due to her daughter’s school obligations.  As a single mother Murphy was tied to school and home, though having a young daughter hardly kept her home.  When her daughter, Rachel, was six, they spent a winter traveling in the Western Himalayas by foot and horse and when Rachel was nine Dervla took her traveling in the Andes, also by horse.

Dervla Murphy traveled little until she was 31 when she realized a dream that she had first dreamt in 1941 at age ten.  For that birthday her parents had given her a used bicycle and her grandfather had given her a used atlas of the world.  Between those two gifts Dervla decided, not long after her birthday, that she would someday ride her bicycle to India.  She realized her dream beginning in 1962 when she left Ireland for India in one of Europe’s harshest winters in eighty years.

Wheels within Wheels, is a fascinating, readable biography of Murphy’s life growing up in a staunch, intellectual, Irish Republican family.  We learn, among other details, that Dervla wrote flowingly and almost without stopping, from the age of twelve when she won the local newspaper’s essay contest five weeks in a row before she and her father decided she should stop competing.

Wheels within Wheels is required reading, then, before you dive into Murphy’s other writings, just a few of which are listed here.

Full Tilt, Ireland to India with a Bicycle (1965)
Tibetan Foothold, (1966) further travels by bicycle
The Waiting Land: A Spell in Nepal (1967)
A Place Apart (1978) Perspectives on Northern Ireland
Tales from Two Cities: Travel of Another Sort (1987) Perspectives on race and prejudice while living and traveling by bicycle in the English Midlands.

(For more complete information on Dervla Murphy and he entire list of books visit www.DervlaMurphy.com)