Deep Down Dark: The Untold Stories of 33 Men Buried in a Chilean Mine, and the Miracle That Set Them Free, By Héctor Tobar

On August 5th 2010 the San José mine located just outside of Copiapó, Chile collapsed 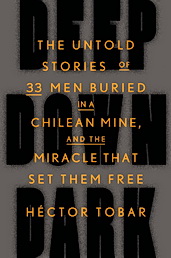 and trapped thirty-three miners thousands of feet underground for sixty-nine days. The disaster and rescue efforts captured the world’s attention, but for seventeen days coverage was limited to the events that occurred above ground. Deep Down Dark goes beneath the surface and reveals the miner’s experiences from the initial collapse, to the rescue, and the aftermath.

The miner’s came to an agreement when their rescue seemed imminent that no one person would speak or individually receive reward from their collective experience. Instead they would agree together who would be given exclusive access to their story so that they could share equally in any profit. Héctor Tobar, a Pulitzer Prize winning journalist, was eventually selected by the miners to tell their story.

This riveting tale of survival delves deep into the heart of what it is to be human. The complexity of our relationships, jealousy, fear, greed, honesty, violence, generosity, caring and grace. The physical and emotional stress of extreme heat, starvation, the terror of being buried alive and forgotten is palpable. The conditions and stress leave the miners exposed physically and mentally. It is a stark display of the best and worst of who we are.

There is also insight into the political and social condition in Chile at the time of the disaster. You’ll learn more about prejudices between Chileans, Argentinians, and Bolivians. The economic situation in South America becomes crystal clear with the discovery that some of the miners commuted over 18 hours to work in the San José mine. The trapped men made a minimum of $1200 a month, which was triple Chile’s minimum wage, and around 20% higher than other Chilean mines. A wage that some say was offered because of the mine’s poor safety record.

“Estamos bien en el refugio los 33” –  a note the miners attached to the drill bit that eventually broke through on August 22nd indicating their location and that all thirty-three were alive. This note marks the beginning of what will become the next stage in these men’s lives. An unfamiliar place of celebrity, and often unwanted attention where money and jealousy wears at families and friends. The post-rescue life seems more confusing and challenging than being trapped for some of the miners.

Deep Down Dark is a captivating account filled with compassion and certainly one of the best books of the year.