Our photo contest may be over, but the memories from all your shared photos remain! Thanks to all who participated and submitted wonderful photos. It was difficult to narrow down, but our judge Jeff Bartlett has made his choices.

Here are your winners: 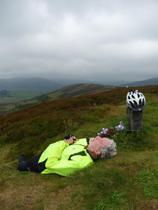 John’s caption: After Climbing — Taken on the Scotland tour. It had been a long, but beautiful climb. At the top was a small headstone and flowers. The cyclist was revived for an easy coast down the other side.

Jeff’s words: I’ve only been on one ExperiencePlus! ride, but I remember this exact moment. Of course, both the person and location were different, but we’ve all climbed our way to fatigue behind the tireless drive of an ExperiencePlus! guide.  The fact that this image is framed beautifully, using the sodden Scottish hills to lead our eye back to the cyclist, and exposed to show just a hint of detail in the overcast sky helped, too. 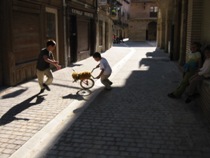 June’s caption: We always call this photo “Little League Bullfighting”.  It is one of the few pictures I actually took instead of Peter and I cherish it.  We were on one of the very first Camino de Santiago tours in 2002 with the all-star staff of Loreto, John, and Mario.  There were only 3 couples.  The picture was taken in the late afternoon as Peter and I strolled around Puente la Reina.  I think we were simply in heaven enjoying every moment, and this scene unfolded before us as we explored the more residential streets.  It was enchanting and one look at this photo can transport me right back, despite the almost 10 years since that trip.  It was the trip that hooked us on ExperiencePlus! forever, and we made lifelong friends.

Jeff’s words: This image is just too much fun. It doesn’t just show me two kids playing in the street; the action and motion really pull you in. I wish I could have either been there to participate or be chased by the single-wheeled bull. 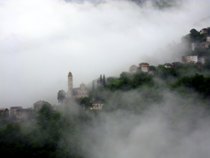 Don’s caption: Corsica, France — Yes, it was very wet! Roads were so bad that we had to shuttle but not before taking this picture from the hotel after enjoying lunch and a few hands of bridge while waiting for the van.

Jeff’s words:  As a landscape, I loved this image. It displays the exact mood – dreary and cold – the cyclists must have been feeling and it really shows of the Corsica landscape, too. 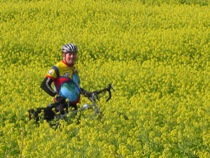 Dave’s caption: Czech Republic — Dave Forester proves he can “cut the mustard” when it comes to cycling.

Jeff’s words: This image is simply beautiful. The mustard field really provides the perfect backdrop for a portrait and the cyclist has just enough yellow on his shirt to make it seem like he belongs in there. The added laugh about “cutting the mustard” does describe a common attitude of a group tour, too. 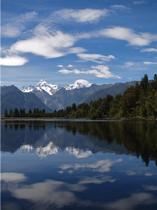 Julie’s caption: This was our rest day in Fox Glacier, so we rode our bikes to Lake Matheson. Crystal blue waters, wonderful temperature, and New Zealand clouds. Perfect!

Julie, you won their hearts!