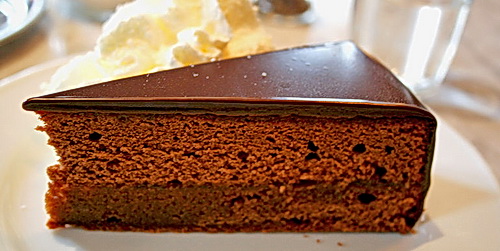 Some would argue that Sachertorte is THE dessert one thinks of when you think of Vienna and we agree it is hard to go wrong when you combine butter, chocolate, jam and whipped cream.

The Sachertorte has a long and somewhat contentious history. In 1832 Franz Sacher, a sixteen- year-old apprentice chef, was called into action to create a special dessert for important guests. He  adapted a torte recipe from Gartler-Hickmann’s 1749 Tried and True Viennese Cookbook. Though the torte was a success that evening it was basically forgotten until Franz’s son Eduard rediscovered and eventually perfected his father’s recipe during his training to become a Pastry Chef and Chocolatier.

Eduard established the Hotel Sacher in 1876 and the Sachertorte became one of Vienna’s most famous culinary specialties. Legal battles over the label “The Original Sacher Torte” first began in the 1930s and continued off and on into the early 1960s. The Hotel Sacher is still open in Vienna and they claim Eduard’s creation “The Original Sacher Torte”.

Technically the recipe we’ve shared with you is similar to  the “Eduard-Sacher-Torte because it features only one layer of jam. The “Orignial Sacher Torte” has two. A wiener mélange or coffee with milk is recommended with the Original Sacher Torte but we can confidently recommend it with this version as well. This is a difficult recipe, so another way to try this cake would be to simply  book one of the four bicycling tours ( Bicycling the Danube from Germany to Vienna, or from Germany to Budapest, or Cycling the Czech Republic –Vienna to Prague, or Vienna to Prague Plus! Česky Krumlov) that will allow you to taste the original and toast your decision with a piece of Sachertorte.

Recipe from our friends at AFAR Magazine