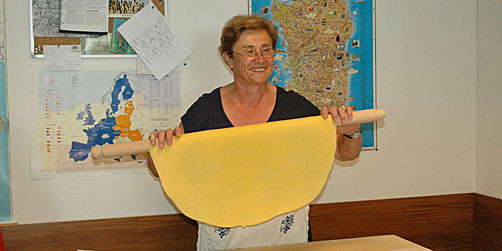 If we’ve learned one thing at ExperiencePlus! over the past forty years it is that our cyclists love to eat.  So it was no surprise in 1991 when a group of customers asked us to design a tour that included special culinary delights, like visits to a parmesan cheese cooperative and a balsamic vinegar maker.  Twenty years later we are still doing a variation of that tour through Emilia Romagna, our backyard, and the heartland of Italy’s culinary delights.

The great thing about this tour is that it allows you to experience the best of Italy’s homemade pasta, Parma ham and cheese, balsamic vinegar, and it takes you through the center of many cultural icons that make Italy unique.  Cremona, for example, is famous for its violin makers, most notably Antonio Stradivari.  Parma is the home of Giuseppe Verdi, Italy’s most famous composer, and Reggio Emilia, like Parma, was one of the “Via Emilia” towns founded by the Romans in the second century BC.

The Via Emilia has shaped the cultural geography of Northern Italy since the Romans built this major road.  All of the towns stretching along it from Rimini to Piacenza – including Bologna, Modena, Reggio Emilia, Parma and many smaller cities – grew wealthy from a combination of commerce and local agriculture.  The result is a string of wealthy medieval and Renaissance cities and towns that have some of the best art, architecture, and food in Italy.

Unlike the more “touristy” regions of Italy, you’ll be cycling through the Italy of real Italians.  Here great food is a key part of local culture. Here the bicycle is a part of everyday culture with kids riding their bikes to school, mothers pedaling to the market square to do their shopping, and fathers and grandfathers pedaling to the central “piazza” to meet their friends and talk politics.

Of all our tours, this one lends itself to café sitting in the square and watching the locals.  Buon viaggio and buon appetito!

Be sure to check out the photo gallery for Italy’s Culinary Delights: Emilia Romagna Plus! Bologna cycling tour.