Enjoy these comforting flavors this winter as you sidle up next to the fire and tell stories, cherish the company of family and friends, and perhaps dream of riding your bike on our newly revised bicycle tour through Central Europe next year.

Goulash is the Hungarian cowboy’s thick soup, which has undergone centuries of variation, but we’ve opted to stick to tradition as close as we can and share this recipe with you. Since it is a hearty (and spicy) meat dish, allow time for the meat to tenderize when you’re preparing this meal. This was a perfect dish for the herdsmen (called ‘gulyás, the origin of the name goulash) tending to their livestock, as they could put their ingredients on hand in a pot over low heat and not have to stir it constantly to have a satisfying dinner later in the evening.

A couple of notes about the paprika used here; in German, ‘paprika’ means bell pepper, and it is a spice that is heavily used in several central European dishes from goulash, cheese spreads, and hot sauces or pastes to accompany meats or breads. Until heated up, paprika is void of flavor, and just provides a color to a meal or serves as a garnish, but if added to a little oil and heated up; its flavor ignites. The Ottomans brought the pepper to Turkey, neighbor to Hungary, and realized they grow well in the hot and dry plains of the country, therefore becoming a common element of the region’s cuisine after the mid-1500s. We welcome you to find a local spice shop and decide on a couple of ounces of Hungarian sweet paprika as a culinary field trip so that your dish is a hybrid of a local artisan’s product used in an international dish. 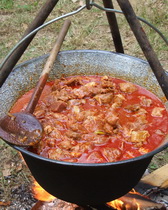 Feel free to eat this over egg noodles (not so traditional), or on its own. For those of you who want a little rustic bread on the side, and still in the mood to make something from scratch, try this potato bread recipe.