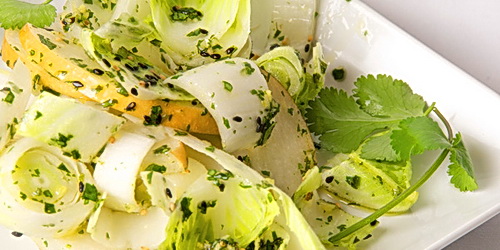 Endive was discovered in Belgium in 1830 and by the mid-nineteenth century it was being cultivated and sold as “witloof” or white leaf. Endive is now grown in a variety of places but many still consider genuine Belgian Endive to be superior in flavor.

Though traditionally in Belgium endive is most often served au gratin rather than eaten raw we thought we’d break with convention and share this refreshing summer salad recipe.

Cut off core of endive and separate leaves.

Slice about half the endive leaves into one-inch pieces

In a bowl, place olive oil, mirin, cilantro and ginger. Whisk together.

Toss the endive and pear in the dressing.

Put mixture on plate and sprinkle with the toasted sesame seeds.

Tip:
Store your endive in a darkly colored bag to protect it from the light as it will turn bitter. In Europe it is often sold wrapped in blue paper for this reason.