“STRANGLE THE PRIEST” A PASTA STEEPED IN TRADITION

Preparing and having lunch together is a long-held tradition for staff at the Farm, our headquarters in Italy. This simple, delicious pasta dish makes regular appearances because you can have it on the table in 15 minutes.

Legends about the name of this twisted pasta abound, but considering Strozzare is the Italian verb for ‘strangle,’ and preti means priests, none of the stories end well for the priests.

Some versions of the story have the clerics choking on the pasta, but our favorite has to do with the ingredients. Traditionally, priests would make weekly rounds to the parish households. Homemakers had to prepare their best dishes for their distinguished guests and that left the pantries empty. Homemade pasta is made from flour and eggs. But if the priest took all your eggs, what are you left with? Just flour and water. Over time that meant pasta with a twist.

Here’s how we imagine an Italian grandmother making strozzapreti:

She mixes the dough, angrily flattens it with a rolling pin, and cuts it into strips a couple inches long. She picks up each strip, rolls it between the palms of her hands and imagines it’s the gluttonous priest’s neck. The result a twirled pasta, and material for your next confession in church! 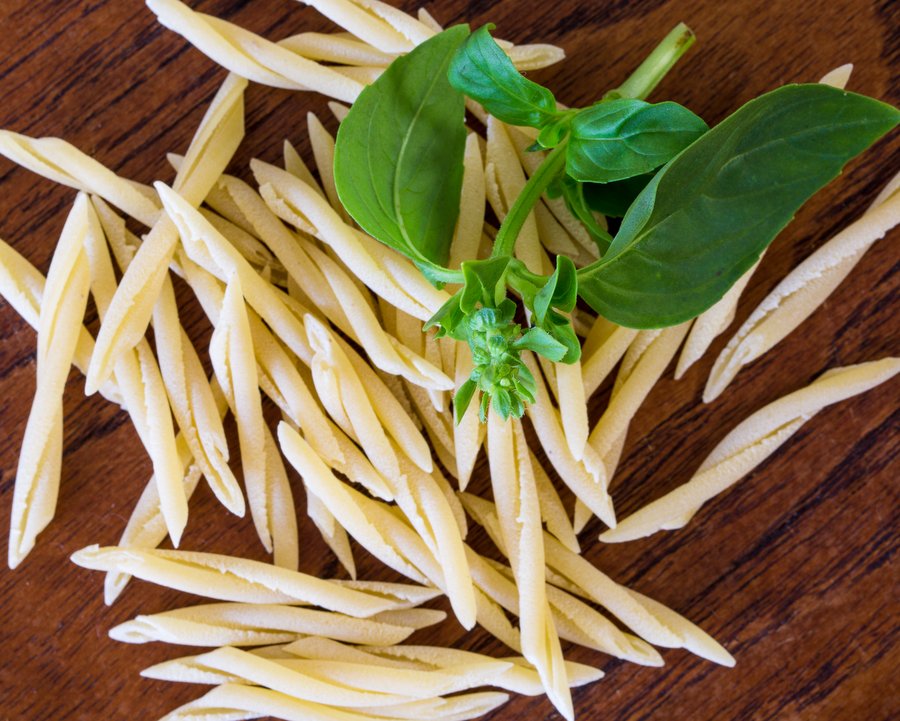 Strozzapreti are good with many sauces; this is one you can whip up while the water boils.

400 grams (one pound) pasta (the closest shape to strozzapreti outside of Italy is probably gemelli. But penne and fusilli work great for this recipe too.
16 oz. bag of frozen vegetables (mixed broccoli, carrots, green beans, potatoes, for example) or a frozen minestrone mix.
12 oz. can of tomato puree.
15 oz. can of chickpeas.
Fresh basil, salt and pepper to taste

1. Boil the pasta according to the package directions.

2. Empty the frozen vegetables in a sauté pan with a couple tablespoons of water. Cover and warm over medium heat.

3. When the vegetables have thawed, add the tomato puree.

4. Add salt and pepper to taste and a few chopped basil leaves and the optional chickpeas.

5. Strain the boiled pasta and add to the sauce.