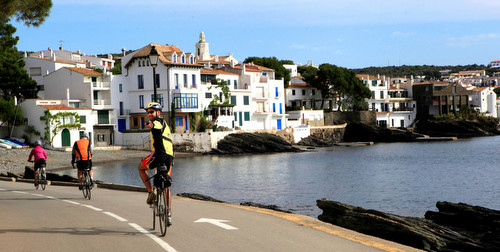 The Cycling Andalucia tour offers days of riding in wide open spaces, climbs to villages in the hills of the Sierra Mountains, near traffic-free roads through olive groves extending as far as the eye can see, Renaissance villages, and ancient cities with world-renowned monuments that tell the story of the region’s historical upheaval and encounters with different cultures and religions. Andalucia is exciting; it is flamenco, bullfighting, mid-day gatherings over café con leche, the evening paseo (strolling and visiting on plazas), night-owl dinners, and very friendly people.

This large region of southern Spain is varied in its landscape and offered us cycling in arid, desert-like land; the fertile river valley of the Rio Guadalquivir; and the hills and mountains of the Sierras. We joked about another day of seeing nothing but olive groves as we cycled between towns, but the vistas were never monotonous as the precision planting of the groves against a backdrop of mountains won us over. Miles of coastline where the Atlantic meets the Mediterranean, across from northern Africa, make up the remaining portion of the geographical layout of the region and helps describe Andalucia’s history.

A short summary of Andalucia’s early history explains the beautiful, sometimes incongruous, but always interesting combination of Christian and Arab architecture of the area. Around 200 BC, the Romans defeated the Carthaginians, ruling the country for approximately 7 centuries while converting the region to Christianity. With the fall of the Roman Empire, the Visigoths from northern Europe ruled Spain until 711 AD when the Moors invaded southern Spain. The Moors held the country for 8 centuries, contributing strongly to Andalucia’s architectural wonders. The reconquest of the country by the Catholic monarchy lasted from the 13th to 15th centuries.

The tour and cycling starts in Seville, the spirited capital of Andalucia, and departs the city via a bike path that leads one past the modern wishbone shaped Alamillo Bridge built for the 1992 World Expo. The hosting of this event was significant in Spain’s emergence from General Franco’s dictatorship and isolation.

Each city and town that we visited has its prominent monuments. Córdoba is known for its tucked away courtyards and flowers;

the Mezquita mosque; and the Sinagoga, one of the few remaining medieval synagogues in Spain. Jaén is known, for its Moorish castle strategically built on Mount Catalina that is now one of the eloquent Parador hotels, our destination for one night. Úbeda, a UNESCO Renaissance village, is home to the famous Tito pottery studio.

Granada, the last city to fall to the Catholic monarchs in 1492 , and our final city for cycling, is home to the magnificent Alhambra, a huge complex consisting of a royal palace, a fortress, and gardens. Visiting the Alhambra also affords an outstanding view of the old Moorish quarters of the city, the Albaicin neighborhood.

It wouldn’t be fair, or complete, to discuss a tour without mentioning the food. You’ll find that Andalucia has many signature dishes—a garlicky gazpacho, Jamon Serrano (a dry cured ham), grilled sardines, tortilla Española (potato omelet), fresh fish and seafood, oxen, quail, olives, paella, and tapas. Tapas are a snack size portion of any of the above selections, typically enjoyed with a glass of beer or wine while standing at the bar. Tapas bars display their selections under glass and it is an excellent way to sample the local cuisine, practice your Spanish, and have a good deal of fun. Much to my enjoyment I found that each day on the tour I could have an ensalada mixta, a fresh and beautifully presented mixed green salad. Even the smallest out-of-the way lunch stops offered this–a delicious benefit of a mild climate and extended growing season. While in Andalucia you can also sample its famous Manzanilla, a very dry sherry made from a white grape and its vino tinto (red wine), both of which receive praise. If you are a fan of fresh squeezed orange juice you may never want to leave.

The tour and olive oil tasting at the Nunez family olive press in Baena educated us on the entire organic planting, harvesting, and production of the oil. There were a few chuckles as we learned that green and black olives grow on the same tree and are differentiated only by length of maturity on the tree. Spanish acieite de oliva (olive oil ) has exceptional flavor and is worth a trip to Spain. You may even take home a few healthy habits like a drizzle of olive oil over your morning toast or over fresh greens.

I returned home from the Cycling Andalucia tour last month and my memories of it grow stronger every time I share my experience. I have new friends, new knowledge, a deeper appreciation for both the similarities and differences of the culture of southern Spain, and after cycling the Sierras I have much stronger calves!

If you are looking to kick start your cycling season with training that includes some long days and hills, consider joining us in southern Spain in May for the Cycling Andalucia tour. You’ll love the challenge, the food, and the excitement of the region.