Bea Tassinari has been working with ExperiencePlus! in various capacities including tour leader, country coordinator, Italian office manager since the 1990s.  She is the go to person if you have any questions about Italy – it seems that no matter the topic Bea has or will find the answer.

Bea has been an integral part in creating the Whole Journey’s Culinary Delights Plus! the Farm itinerary so we thought we’d check in with her about this wonderful cycling tour that travels through our home region.

When asked about my favorite visits on this amazing culinary and cycling extravaganza the first things that come to mind are the family run Acetaia Cavalli in Scandiano (Reggio Emilia) and the marvelous Hotel dei Commercianti located in the heart of Bologna, perfectly situated facing the Basilica di San Petronio. Both have been family-run with enormous affection for many years. To me they represent the passion “per le cose fatte bene”, for things done well. 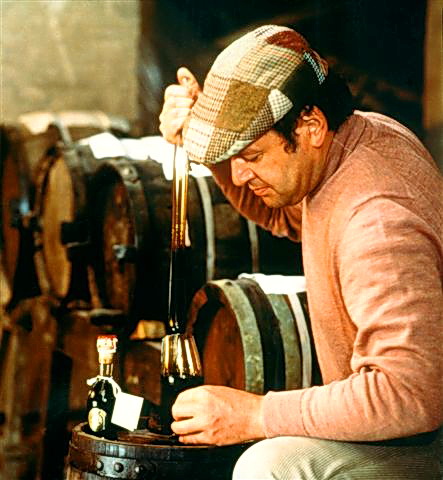 Acetaia Cavalli has been a favorite stop for ExperiencePlus! since I first began running tours back in 1998. Giovanni Cavalli still uses the preserving batteries (a row of barrels of different sizes and types of wood) inherited from his father Ferdinando to produce his special balsamic vinegar.  These batteries, are treasured for their economic value, but even more importantly they tell the story of the family and this part of Italy.

The method of production is passed down from father to son and is based on topping off the levels of vinegar in the various barrels. This means that the last barrel, the smallest one containing the mature traditional balsamic vinegar ready for the table, always has a little of the family’s oldest  vinegar, which may have been started two or three generations before. If we consider that every drop of traditional balsamic vinegar from Reggio Emilia has to be aged for at least twelve years, it is suddenly obvious that these barrels have been in the family for over a century, some even date back to the 18th century.

Giovanni Cavalli tells us: “Since I was a child, I saw my father’s devotion – he dedicated 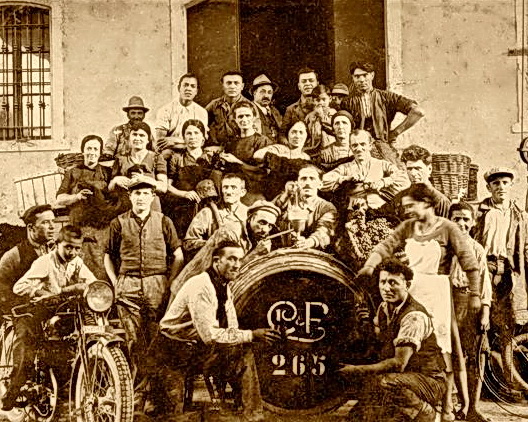 each free moment to the management of the winery and the care and recovery of old casks containing centenary balsamic vinegar. I learned to appreciate the complex aromas and to recognize the “flavor of time”. After briefly trying my hand at surveying I decided to help my father and pledged myself to the family business and soon took over the management of the craft shop.

In 1980 the acetaia relocated to the village of Via del Cristo in Scandiano, and all the batteries belonging to the family were moved there. Originally the markets for Balsamico Reggiano Tradizionale were in the provinces of Modena and Reggio Emilia, then, thanks to our efforts, and to the promotion of the product, the market has since become more global.”

Giovanni founded the Brotherhood of Traditional Balsamic Vinegar, a cultural association for the development and maintenance of the family’s vinegars. He also started the Consortium of Producers of Traditional Balsamic Vinegar of Reggio Emilia. The inverted tulip bottle shape that today characterizes quality vinegar was something that Cavalli perfected. The improved bottle shape coincided with a change to the label to more easily distinguish quality using colors borrowed from Olympic medals though bronze was replaced with the red / lobster to better differentiate it from gold. 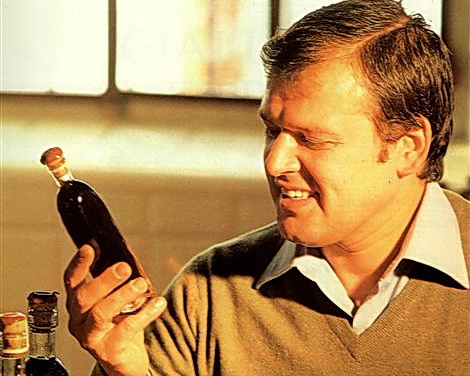 According to Giovanni every acetaia should have a comfortable chair where the maker can sit with his family’s notebook among his batteries. Giovanni says: “You should sit and ponder what you have done so far, while reflecting on your parents and grandparents. And finally after thoughtful contemplation, mark the operation’s diary with the steps you have taken, and browse and read what has been written years before. For me it constantly revives the strong link with the previous generations of my family.”

Acetaia Cavalli is always open to visitors and Giovanni’s pleasure is obvious as he walks amongst his barrels, explaining production while conveying his passion and dedication to his family’s tradition. This is a visit that shouldn’t be missed and an excellent example of just one of the many “taste” opportunities along the way on the Culinary Delights cycling tour. 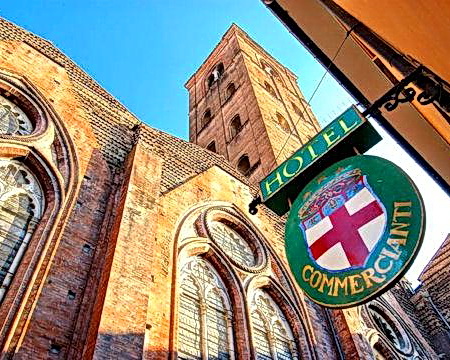 a deep-rooted history on via de’ Pignattari, named for the pignattari (potters) who made terra cotta pots called “pignatte,” originating from the Latin “pinnata”.

Serena Orsi, owner and director of the hotel says: “It’s fascinating to look at our building’s history based on the traces left behind by its inhabitants, each of whom used it as a residence and workshop in turn, modifying and readapting it to their purposes over the course of nine centuries. Its current incarnation as a hotel dates to the twentieth century, it was originally a tower house in the high middle ages, at the beginning of the eleventh century, when such fortified structures were built to resist the wear and tear of the times–as well as acts of hostility by enemies. Even today, despite numerous renovations, the foundations of the tower are still visible on the exterior, the high compound pillar and the wooden trestles of the portico still support the original façade. On the interior beams 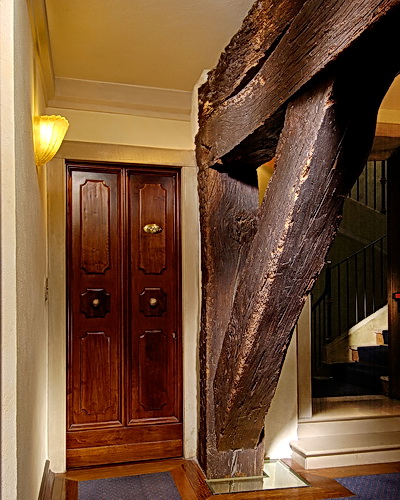 integral to the building’s structure are  blackened by an ancient fire. The well dug deep into the subsoil once supplied water to the inhabitants during sieges. All that remains of the splendor of the wealthy families that once occupied the building are the frescos that were created using the original segno a chiodo techniques (literally “marks by nail”). What we have discovered over the course of various renovations bears witness to the life and activities of the building’s previous inhabitants. One last jump forward in history brings us to the beginning of the twentieth century, when the inn became a hotel, taking its name from the merchants (commercianti) who frequented the important weekly market in the nearby Piazza Maggiore”.

An impressive history but what truly attracts one to this hotel is the passion that the Orsi Family puts into its management. The Hotel dei Commercianti, and the four additional hotels that the family owns and operates in Bologna, feature interior and exterior art installations a testimony to the famiglia Orsi passion for art and the support they give to artists. Every single detail found during the restorations has become part of the hotel’s design…it is simply a pleasure to be a guest here.

Beatrice - Beatrice a.k.a. "Bea" leads a few tours each year and loves scouting for new ones. Her main responsibility is preparing all the materials for ExperiencePlus! tours in Italy. She also makes sure that tour leaders have all the necessary information to lead the best tour possible! During her winter vacation she usually travels with her backpack in places like western Sicily, India, Burkina Faso….