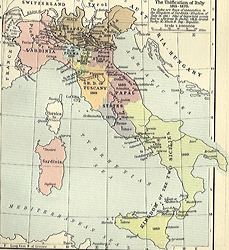 As we prepare to celebrate the 150th anniversary of Italy’s unification by bicycling from Marsala, Sicily to Turin in Italy’s Piedmont, the actual 15oth anniversary came and went on March 17 this year.  That was the day that Italy officially celebrates the plebescite or referundum that united southern Italy with the Kingdom of the Two Sardinias, comprised of the Piedmont and of the Island of Sardinia. 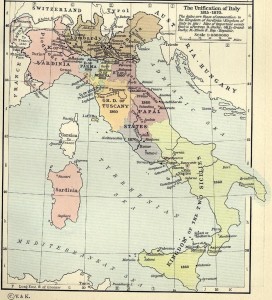 Our celebration, however, begins the year before in May of 1860 when Giuseppe Garibaldi actually sailed from Genoa with his 1080 volunteers to the port of Marsala in Sicily to ignite the local populations to rebel against the Spanish monarch, Francis II, sovereign over the Kingdom of the Two Sicilies and based in Naples.  The Two Sicilies were the richest parts of Italy before unification although the wealth was concentrated in the cities and the peasant populations in the countryside were poor and ready to rebel.

Follow us on this blog or pick up our RSS Feed as we bicycle from Marsala beginning May 7th to Turin where we arrive on June 3rd to end our ride the next day, June 4th.

The process of unifiying the entire boot continued from March of 1861 until 1871 when Rome finally became the capital of Italy.