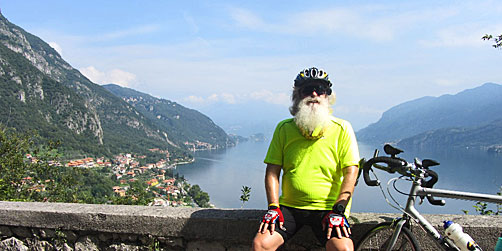 Tell your friends that you are going bicycling in the “Lake District” and most of them will think of England and the romantic English poets like Coleridge and Wordsworth.  But our Lake District bicycle tour of Italy is pure Italian (with a stop in Switzerland) and an exciting new 7 or 11 day cycling option in 2012.

Since Roman times Italy’s lakes Maggiore, Como and Garda have attracted visitors seeking the mild micro-climates that allow citrus trees and olives to grow further north than their typical habitat on or near the Mediterranean Sea.  Add to that climate formal Renaissance gardens, 17th century villas, alpine views and lively lakeside villages and you have a delightful bicycle tour through northern Italy.

Most American visitors to Italy have heard of these lakes by name, or they have traveled along their shores while taking the train north to Switzerland or Germany.  This is your opportunity to explore these gorgeous lakes by bicycle. We’ll also take ferry rides across them and have plenty of opportunities to discover the villages and villas that line them.

This tour dips briefly into Switzerland where we spend a night in Lugano since two of the lakes – Maggiore and Lugano – actually form a border with Switzerland.  We can’t visit Switzerland without visiting a chocolate factory, so we do that the day we head to Lugano.

The 11-day Plus! version of our Lakes District tour allows you to explore Lake Garda, the largest of Italy’s Alpine lakes.  Lake Garda marked the historic boundary between Medieval Lombardy and the hinterland of the Venetian Empire.  Peschiera del Garda, which sits at the south end of the lake, was a planned military fortress defending the northwestern frontier of Venice.  We’ll pedal right through the lively town of Peschiera where we pick up the Mincio River bike path that will take us all the way to Mantua.  Mantua is itself surrounded by water on three sides, formed by artificial lakes created in the 12th century to protect the city from invasion.

Bicycling along these lakes and below the alpine peaks that define some of them reminds me of pedaling Cap Corse in northern Corsica, parts of the Greek Islands, or bicycling in Sardinia.  The views are wild and spectacular and just when you think you are far into an Alpine valley you emerge along the lake shore to find a small village with its café and town square.

Take a look at our photo gallery and join us to bicycle through the spectacular Italian Lakes region of Italy.