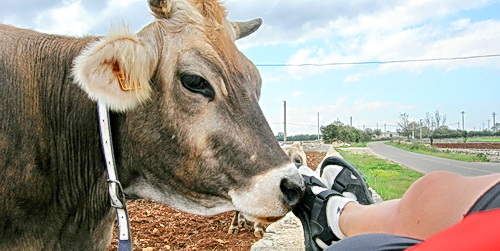 Selecting a bonus “theme” to take with me on my ExperiencePlus! cycling trips has always enhanced my excitement and sense of discovery about an 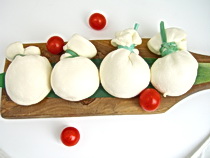 area. When I found out I would be going on the Cycling Puglia Plus! the Ionian Seaside tour a few years ago I started to read up in an effort to narrow in on something special that I could learn more about throughout the trip. The choice for Puglia came to me quickly. After all, in traveling to Italy I immediately think of food, and soon discovered that Puglia is renowned for its cheese.

It didn’t seem a big leap to go from cheese to cows and since I live in the same town as animal scientist Temple Grandin, famous for her books Animals in Translation, Animals Make Us Human, and the award-winning film about her life, I decided to do some research on the beasts that provide the primary ingredient for many a fine cheese. I learned in Animals in Translation that cows have an insatiable curiosity – introduce something new in their pasture and though they’ll be nervous about the change they simply can’t help but investigate.  Temple says that you can easily test this theory by lying in a pasture filled with cows to see what they do and I couldn’t wait to try it in Puglia.

My homework complete, I felt ready to start my cycling trip in search of docile cows (note to self, avoid bulls) and delicious cheese (observe, smell and finally taste). It didn’t take long for my “field work” to begin. Day 1 of the trip found me eyeing the opposite end of the breakfast bar where an intriguing little white pouch tied decoratively with a small green ribbon sat. My curiosity immediately piqued – was I already on the path to hidden treasure – could this be the burrata cheese I had read about?  One tug of the ribbon and the soft fresh mozzarella exterior released a flood of creamy fresh mozzarella inside. Yummy! This proved to be a fabulous precursor to all of the fresh mozzarella that I would find during the week in pastas, bruschetta, salads, and pizza. 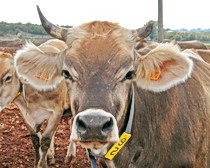 Fortunately, the “official” theme for this tour was bicycling, so I never felt guilty as I was “working off” my consumption of extra cheesy bits.  Traveling by bicycle also meant that I was perfectly situated to accomplish my other goal of finding cows. After all, remote country roads typically lead to pastures and pastures inevitably lead to cows.  Day 5 just outside of Alberobello I came upon the most beautiful cows I had ever seen and instead of barbed wire they were contained by fabulous thick stone wall with flat tops perfect for a curious cyclist to perch on. I climbed on the wall and for safety’s sake kept my helmet and sunglasses on. It turns out that cows explore with their mouths and they have incredibly rough tongues with prolific amounts of thick mucusy saliva which is more often than not filled with grassy bits. Unfortunately I didn’t discover this last bit of important information in my research but wish I had.   I still have a visceral response when I think of my sandal clad toes being engulfed in cow slobber. My disgust is combined with pride at having met and “interacted” with a truly beautiful Puglian cow who was an obvious leader of herds. 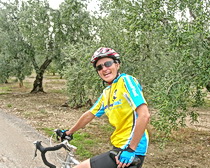 “basket” that herders originally used to store the cheese during the aging process). This aged cheese is still produced using the same techniques mentioned in Homer’s Odyssey. It is brushed and massaged with extra virgin olive oil during the aging process which protects it and gives it a warm brown glow. In modern times Canestrato cheese is Denominazione d’Origine Protetta (DOP) certified which means it is guaranteed that the entire production is geographically limited to a specific area – Puglia! This cheese has become quite rare and I knew finding it would take a bit more effort but the idea of olive oil and cheese together gives ordinary humans super powers – or at least I hoped so.

Luck was on my side: there was a dairy co-operative near Corato, just a few kilometers off our cycling route and I headed off hoping that a cheese loving cyclist would be warmly welcomed with samples. The gods transpired against me though and horrors of horrors I found that the co-op was closed on the weekend. My fantasy of being whisked away for a private tour through a pastoral paradise filled with happy animals and a dairy filled with the scent of cheese was unceremoniously crushed. After a half-day of pouting I realized that the pursuit of cows and cheese can be almost as rewarding as finding them. As I searched for the perfect pasture I found myself anticipating what was behind each bend in the road.  By traveling on a bicycle I had ample opportunities to engage with the local environment and I found that by focusing on two – rather silly – goals I amused myself immensely and learned something new about Puglia. Not to mention, I am now a part of what I imagine is an elite group of people who have had their toes sucked by a cow.