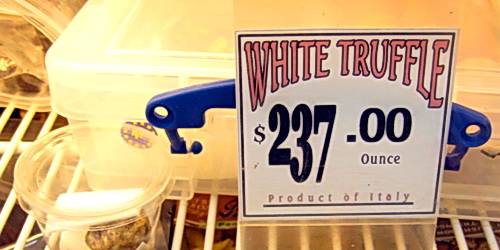 What did Marilyn Monroe, Mussolini and President Truman have in common? Fame? Certainly. Insomnia? Quite likely. But the three of them also shared a partiality for truffles (Latin name: tuber magnatum).

For those of you who have never seen a truffle, imagine a muddy version of French actor Gérard Depardieu’s famous nose and you’ll be close to the mark!

Truffles are generally served shaved onto pasta or rice dishes and are currently the world’s greatest food commodity, fetching $300 for just under a quarter lb or, at auction, up to $430,000 for a single truffle weighing 4 1/2 lbs.

There are 2 types:
a) Black truffles come from Périgord, France. They are spontaneously found by pigs because they contain a substance similar to the sex pheromones present in a male pig’s saliva. Little Miss Piggies get very excited when they sniff the truffles in the undergrowth of an oak or beech tree, thinking they’ve found Mr. Right! The problem is, farmers then have to fight to extract the truffles from their snouts which results in the truffles getting damaged.

b) White truffles on the other hand come from Alba, Italy, and are found by trained dogs who don’t damage them. In fact the world’s first Dog University was founded in Alba specifically for this purpose in 1880, which makes it older than both Stanford and the University of Texas. The dog training lasts 2 – 3 weeks and lessons are conducted on rainy days, when the soil is damp and thus easier for the dogs to follow the scent. The University was founded by the Morra, one of the oldest families in Alba. According to tradition, it was Mr. Morra who found the first truffle in history and another Mr. Morra who later brought white truffles to the public eye by pulling an amazing publicity stunt. Each year he sent the largest truffle found that year to one of the world’s greatest celebrities. These included Stalin, Churchill, Mussolini, Queen Elizabeth II, Hailé Selassie (Emperor of Ethiopia), President Truman – who went on to order 5 years’ worth of White truffles for the White House (appropriately!) – and, last but not least, Marilyn Monroe. This is the thank you letter that Marilyn sent to him:

I received your magnificent truffle and I have to say I have never tasted anything so tasty and exciting. Thank you for the PLEASURE it has given me.

your devoted and affectionate,
Marilyn

Mr. Morra was so pleased that he wrote back inviting Marilyn Monroe to become the Patroness of Truffles!

On one occasion Mr. Morra was convinced to forego this tradition for love. A wealthy business man from Turin who was crazy about Rita Hayworth wanted to send that year’s largest ‘grey diamond’ (as white truffles are also called) to his beloved. Love being the soul of Italy, Mr. Morra agreed, but no one knows whether the truffle’s alleged aphrodisiac qualities worked in favor of the businessman!

You can learn first hand about these delicious specialties from the earth on two different ExperiencePlus! tours: Cycling Piemonte (for the white truffles of Alba) and Cycling the Dordogne (for the black truffles of Périgord).

A long-standing rivalry exists between supporters of the French truffes and Italian troffie. White truffles are generally considered the most refined by chefs worldwide, but why not make up your own mind by trying them out on tour? Then please let us know which you prefer!