JoAnne “Jo” and Jenica Baldwin sat down with ExperiencePlus! to talk about their recent family trip to Ireland’s West Coast.

EP: Ireland is known for its rainy weather; how did you prepare for it? Any tips for especially rainy or windy days?

Jo: The rain makes everything so green and fresh, so when it was raining, we felt like it was somewhat justified. Plus, even on the nastiest day, after fighting winds and some rain, we arrived at our hotel and had the chance to get into dry clothes. After a warm shower, the day wraps up nicely when you have a cup of tea, cookie, and miniature nap before dinnertime with your travel companions. 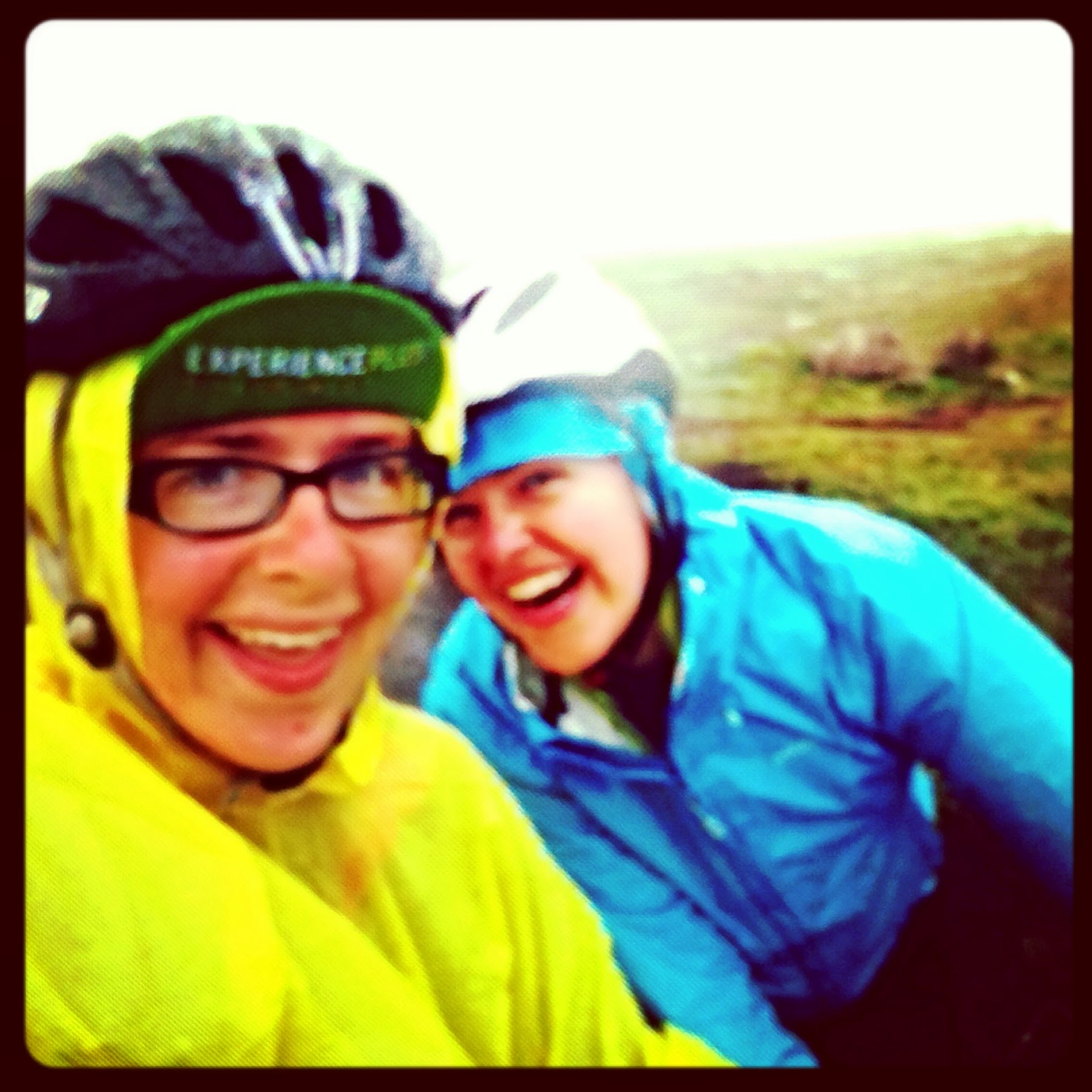 Jen: Some days I would cycle faster because I knew the faster I went, the faster I would be able to nap. As a ‘Seattle-ite,’ I am relatively used to the rain, but cycling in it is a whole different deal.  I did quickly learn, though, that Ireland’s ‘light’ rain is a steady downfall, so I had to adjust to that; and biking in ‘light’ rain makes it feel like nothing but a storm (but, thankfully only for 2 days). At least I’ll have a different attitude about the possibility of biking in the rain now that I’m back in Seattle.

Jo: Ride faster to beat the rain; one afternoon post-lunch, Brett (our brother) and I had about 20K left and decided to turn it into a sprint just for the fun of it (and to try and endure the weather). One day, we had a leisurely breakfast and read books in the hotel sitting room with tea to let the rain die off a bit before heading out. It’s all a game, and really if you have the right equipment, you’re fine. 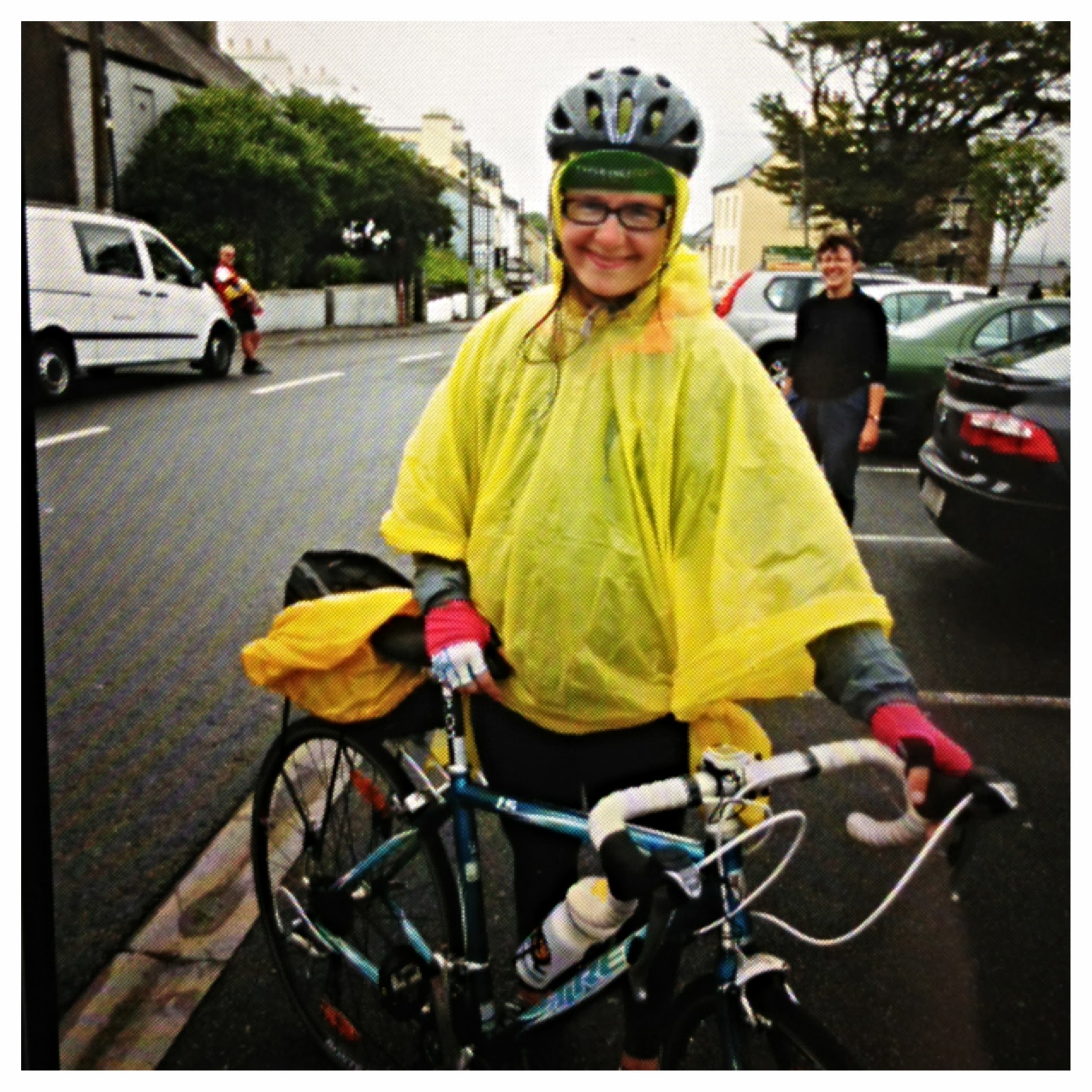 Jen: Remember how I forgot my rain jacket at home? Doing laundry the night before a trip I heard was always a bad idea, and that’s exactly what happened.  From day one, I was on the lookout for a poncho or replacement rain jacket.  I found a poncho about four days in, and the first day wearing it, it was one of the windiest, rainiest days on tour (with crosswinds, might I add) and JoAnne couldn’t get enough pictures of me with my bright yellow poncho blown up like a balloon. I kid you not, the wind was so strong, the poncho began choking me; so, I yanked on it and ripped it into a V-neck on accident.  Just in case you were wondering, V-neck ponchos are an ineffective way to keep dry. I will tell you, I was happy to be breathing.

EP: You both traveled with your parents and younger brother. How was this style of trip for a family vacation: did it work? 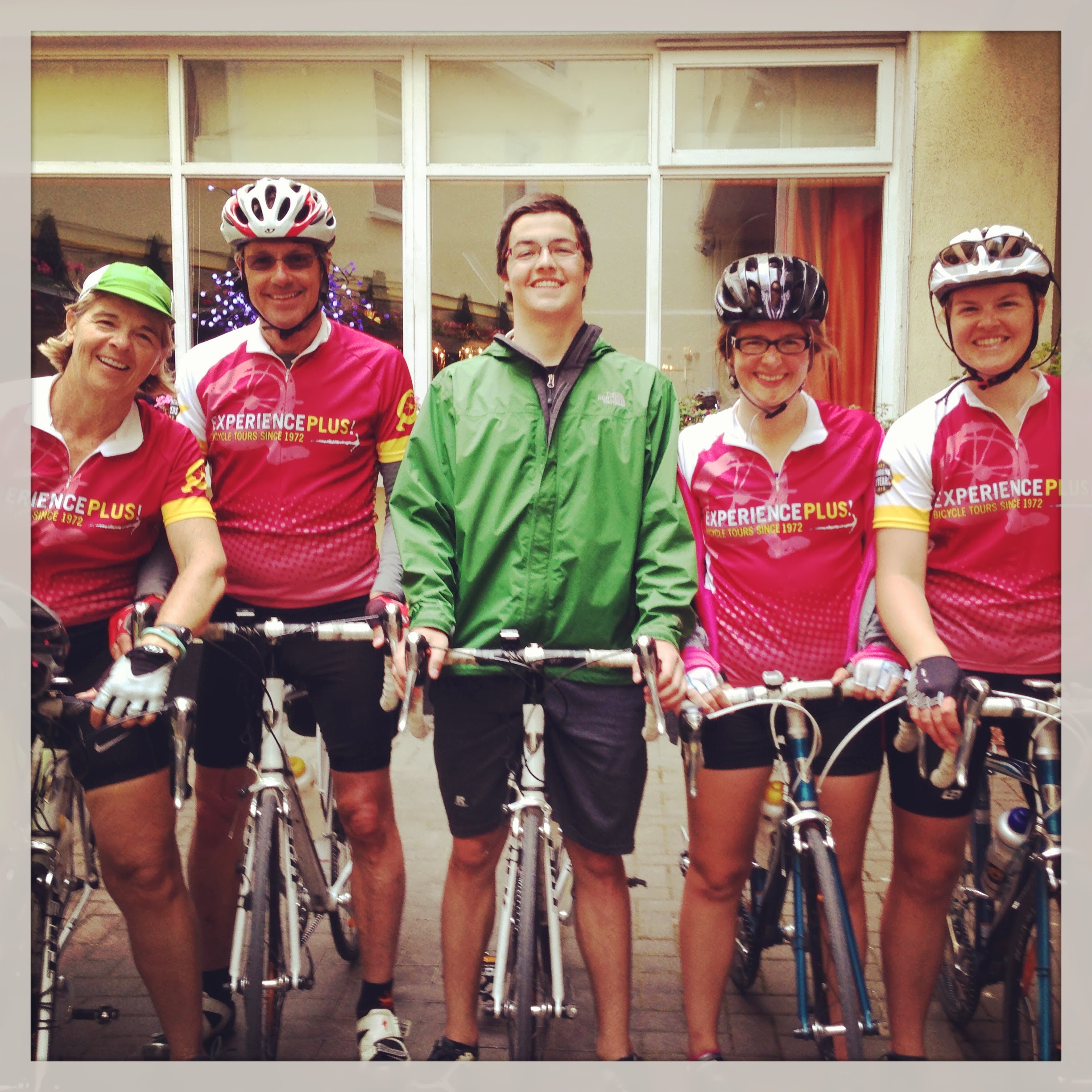 Jen: I always look forward to family time together & I was especially excited for this trip because we had never done anything like this before. I kept thinking to myself, ‘How many other families our age (JoAnne, 25, me, 22, and Brett, 19) could conquer a 292-mile bike trip?’ That was an inspiration in itself to keep going & to embrace this opportunity for what it was.

Jo: Since we all were at pretty similar levels in terms of biking ability, the 201 rating allowed for spurts of speed, photo shoots, prolonged stops for picnics, wandering in town, and still enough mileage to keep us all satisfied. The chalk arrows on the ground gave us flexibility, and encouragement when we needed it, and when we wanted to split up, that was possible too. The entire family enjoyed the adventure, the elements of exploring a new place, and also the freedom to accomplish a mileage goal individually each day too.

EP: The West Coast of Ireland is pretty rural. Was it difficult to find places to eat lunch? 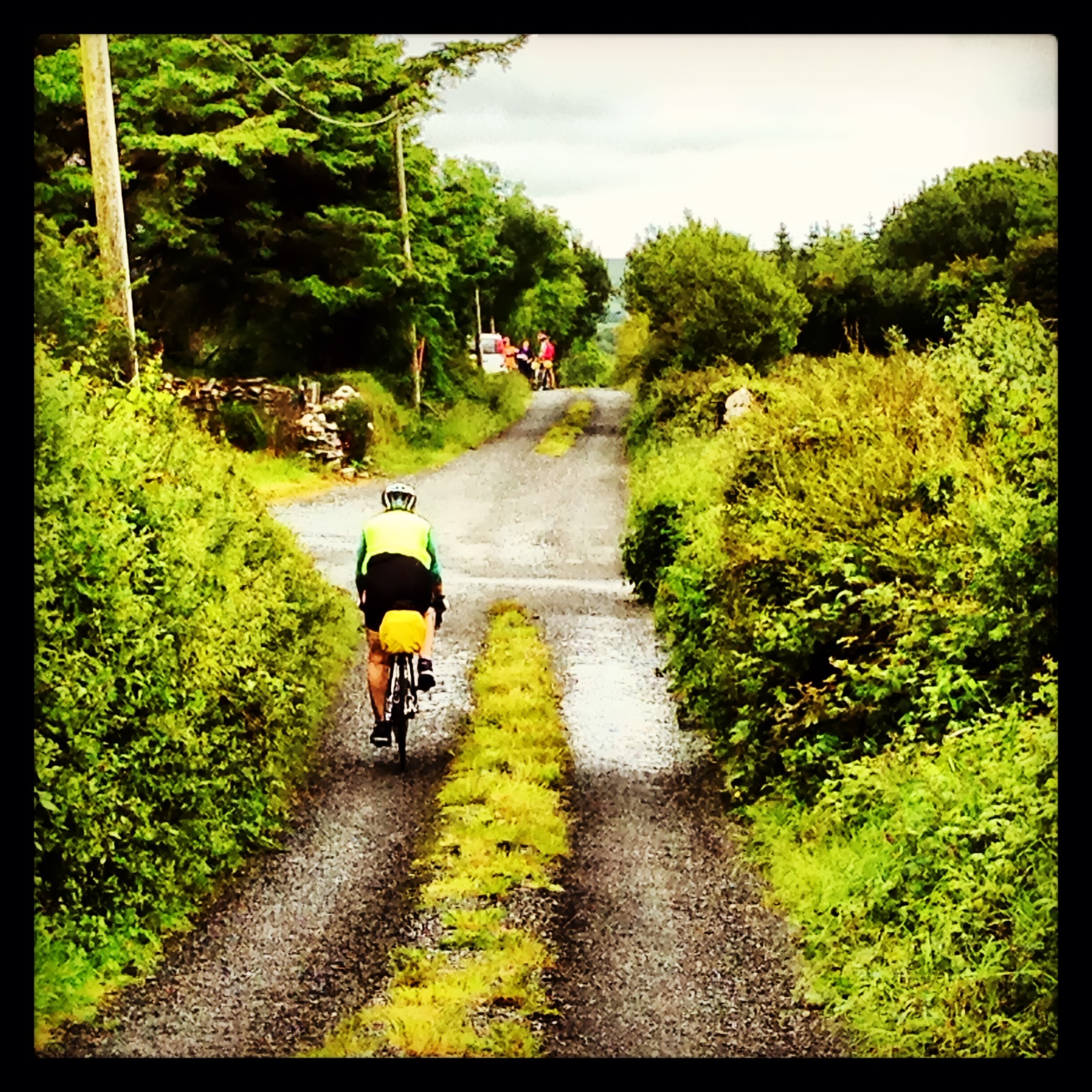 Jo: As long as you looked at your day sheet and took the recommendation for the town to stop in for a bite to eat, it wasn’t too difficult. One of the things to note about this part of the country, however, was that there aren’t too many small towns to pass though on the rides, so when we did go through one, we made it a habit to either pick something up and store it in our rear rack packs for a later picnic or eat on the spot. While it was rural, I really enjoyed the quietness of the roads and the number of animals we met, and the routes that we took that spit us out right at the notable sites, while also keeping us far from tour bus routes. We had the opportunity to see the Cliffs of Moher and breathtaking coastline rides while still taking side roads and passing through memorable towns with tea shops. 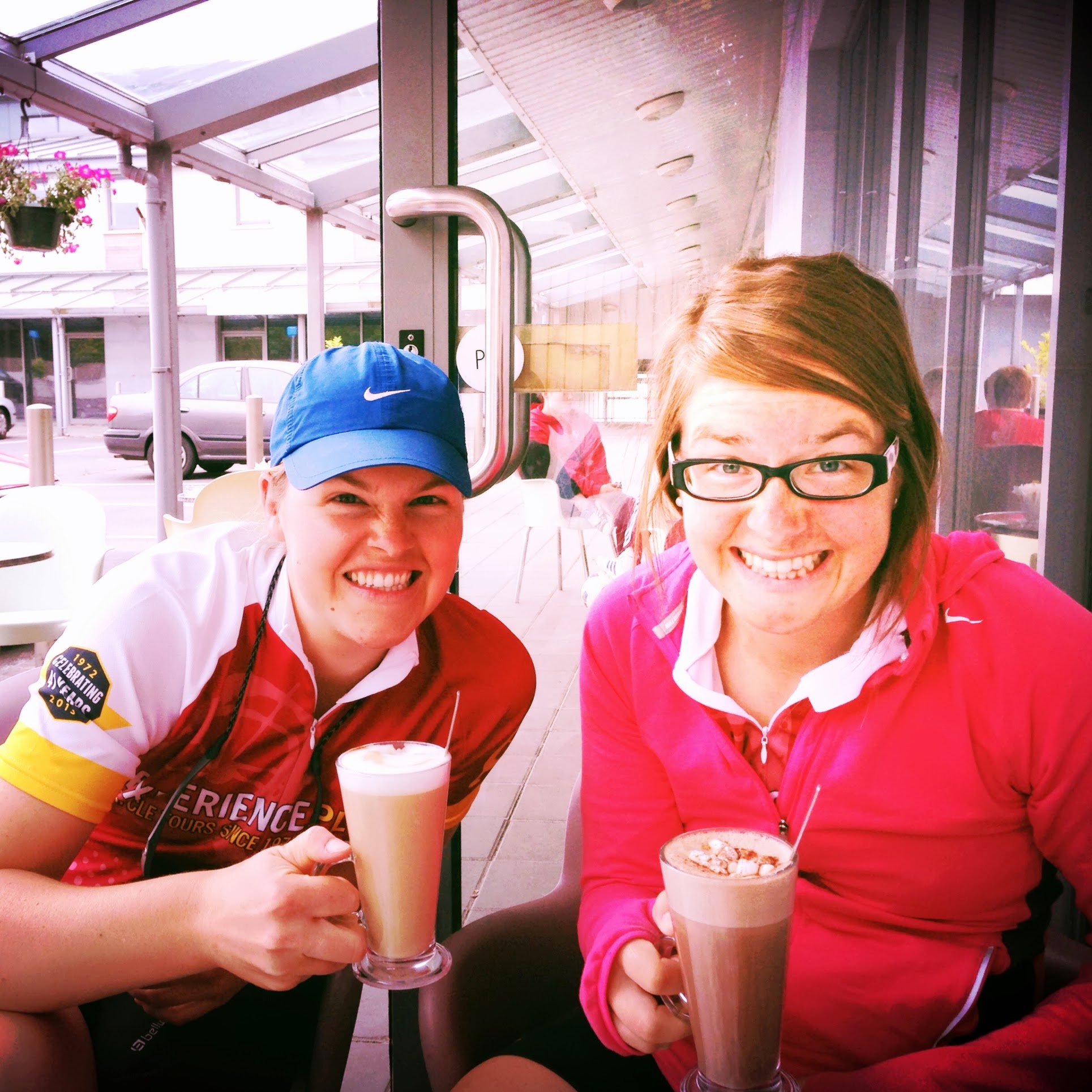 Jen: The first day was especially memorable for me – we stopped in a small town called Ennistimon and I eyed a crepe shop first thing & couldn’t stop thinking about it until we circled back through town after lunch for a nice afternoon Nutella crepe. I think it was then that it hit me that I was in Europe, on a bike tour, in the middle of a beautiful country and that crepe sealed the deal.

Jo: Mmm…that crepe was delicious. I wondered if she might dollop more Nutella on there if I had ordered in French; I guess I’ll have to go back and try again to see what happens.. And it seemed that towns along the way just in the right places allowed for hot deli counter indulgences when needed. We had to keep remembering that to-go was called takeaway.

Jen: Also, with my quiche warmed up and some chocolate, I was a happy camper.

EP: Any notable cultural observations you made? 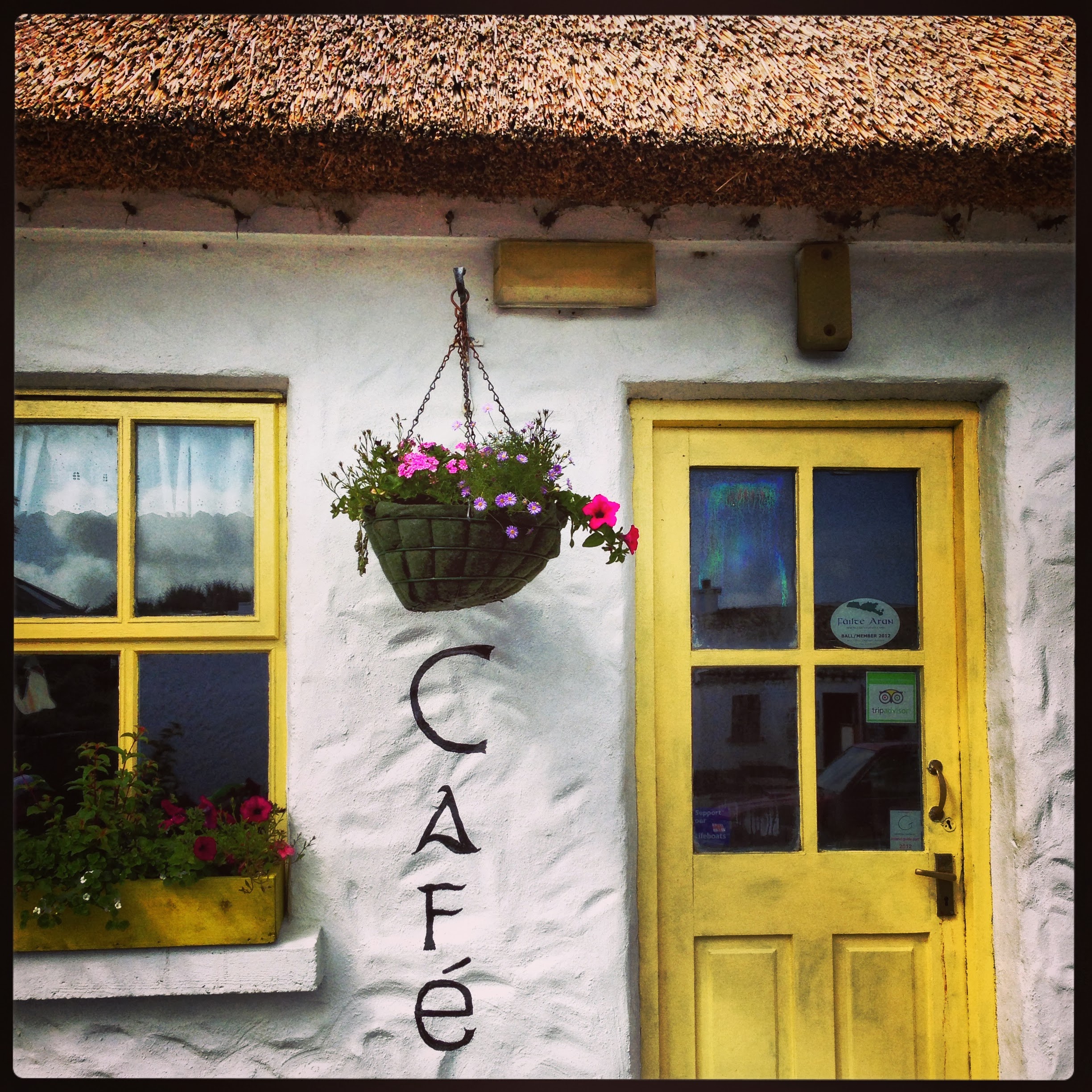 Jo: Life is centered on the pubs in these towns, and while we appreciated the local feel of these places, some towns had a much higher percentage of tourists waiting to listen to the famed ‘trad’ (traditional) music. I personally enjoyed the buskers in Galway over the pub musicians, probably because I liked strolling around, watching and listening without having to be inside looking around corners of the small pubs to see the musicians.

Jen: I enjoyed the street musicians as well as the traditional music and group sing-alongs, songs emanating from the packed pubs.  I felt engulfed in the culture with a Guinness in hand serenaded by lively tunes passionately played by locals.  Apart from the pub scene, I thoroughly enjoyed the numerous back roads we were able to cycle on and observe the simplicity of rural Irish life.  I had heard so many wonderful things about how welcoming and friendly the people were in Ireland before the trip, and I am so thankful I was able to experience that for myself.

Jo: The pubs were something else; the big question at hand was ‘would you order a Guinness or a Bulmers (cider)?’ As long as you got that figured out, then your night was set. In other dining establishments, an observant diner would see that the Irish flag’s colors were represented with each plate. It usually was in the form of carrots, some greens, and potatoes, but it became something we looked forward to with our dinners. Oh, and the weather is a culturally acceptable (and expected) topic of conversation!

EP: Tell us about the people you met on tour. 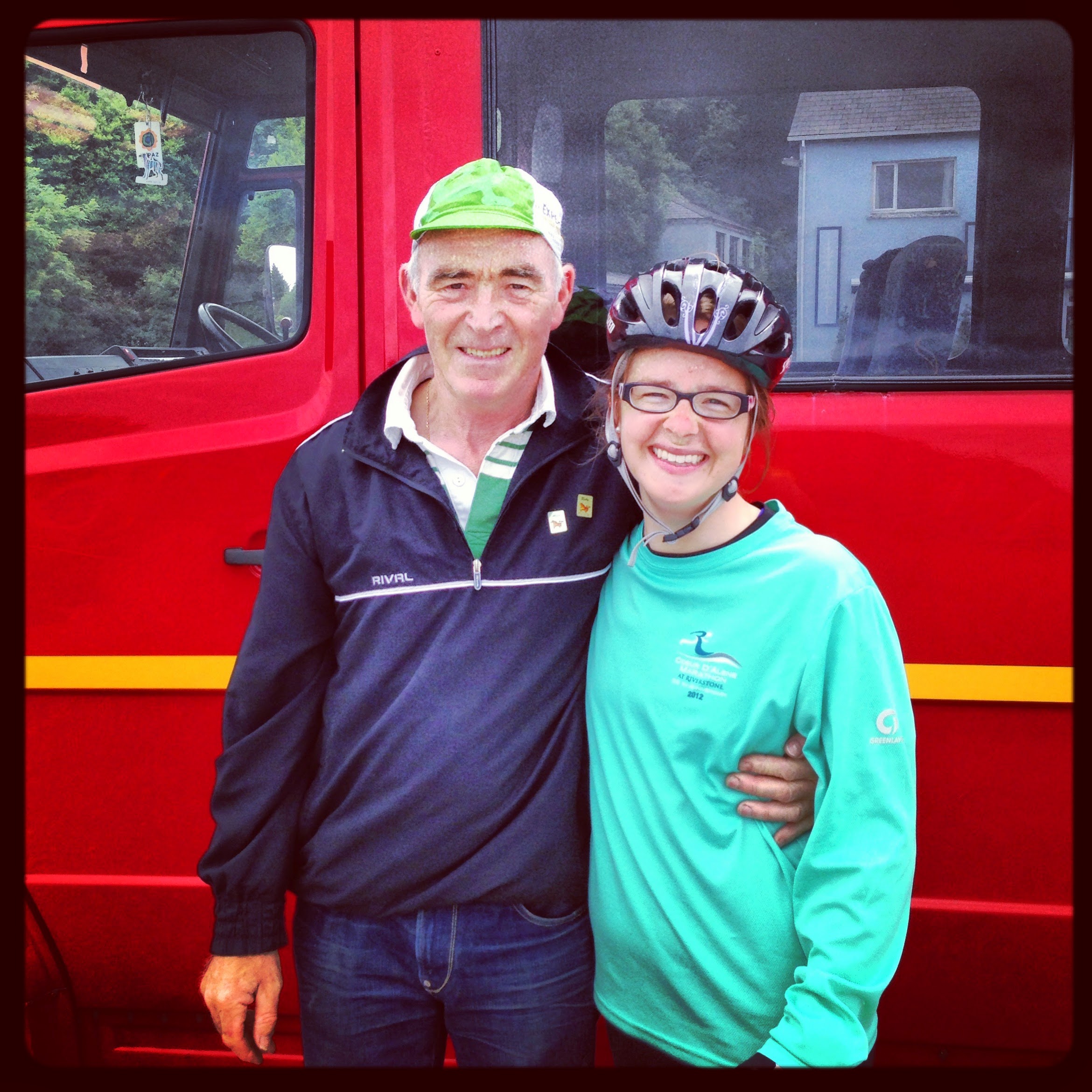 Jen: Looking back on trips, I vividly remember the people who were a part of it and who were contributors to making the memories.  This trip in particular, apart from it being a family vacation, we met a handful of people along the way that truly enhanced our overall experience. One Irishman in particular – Timmy.  Timmy approached me after I had parked my bike on the side of the road to ask where we were going and expressed interest of our trip.  After explaining, he informed me he was a bus drive for all the children in the park behind us that were running around speaking in Gaelic.  I ended up giving Timmy my ExperiencePlus! hat so he could wear it when he was driving his bus & he could think of us every time he saw other cyclists on the road.  He bid me goodbye with a few hugs and some friendly kisses on the cheek.  It brings a smile to my face thinking of Timmy in his bus wearing my green ExPlus! hat.

Jo: Our tour leaders really made the trip for me. Yorgos told us about his love of Dun Aenghus on the ferry ride to Inishmore, so naturally, we were stoked to see it for ourselves. Dermot gave us a genuine insight into his country and the cultural beauties and idiosyncrasies of the Irish people, and graciously escorted us to the local pubs each evening. Wilma was our van driver extraordinaire and just when we felt a little weepy from a long stretch of road, we would see her parked on the side prepared to refuel us with Mars bars, fruit, and meet our occasional bike repair need. I also enjoyed the way the Irish people chatted about anything and everything, from their favorite seaweed snacks to their family history, and of course the weather.

EP: You mentioned animals earlier. Any run-ins you’d like to recount? 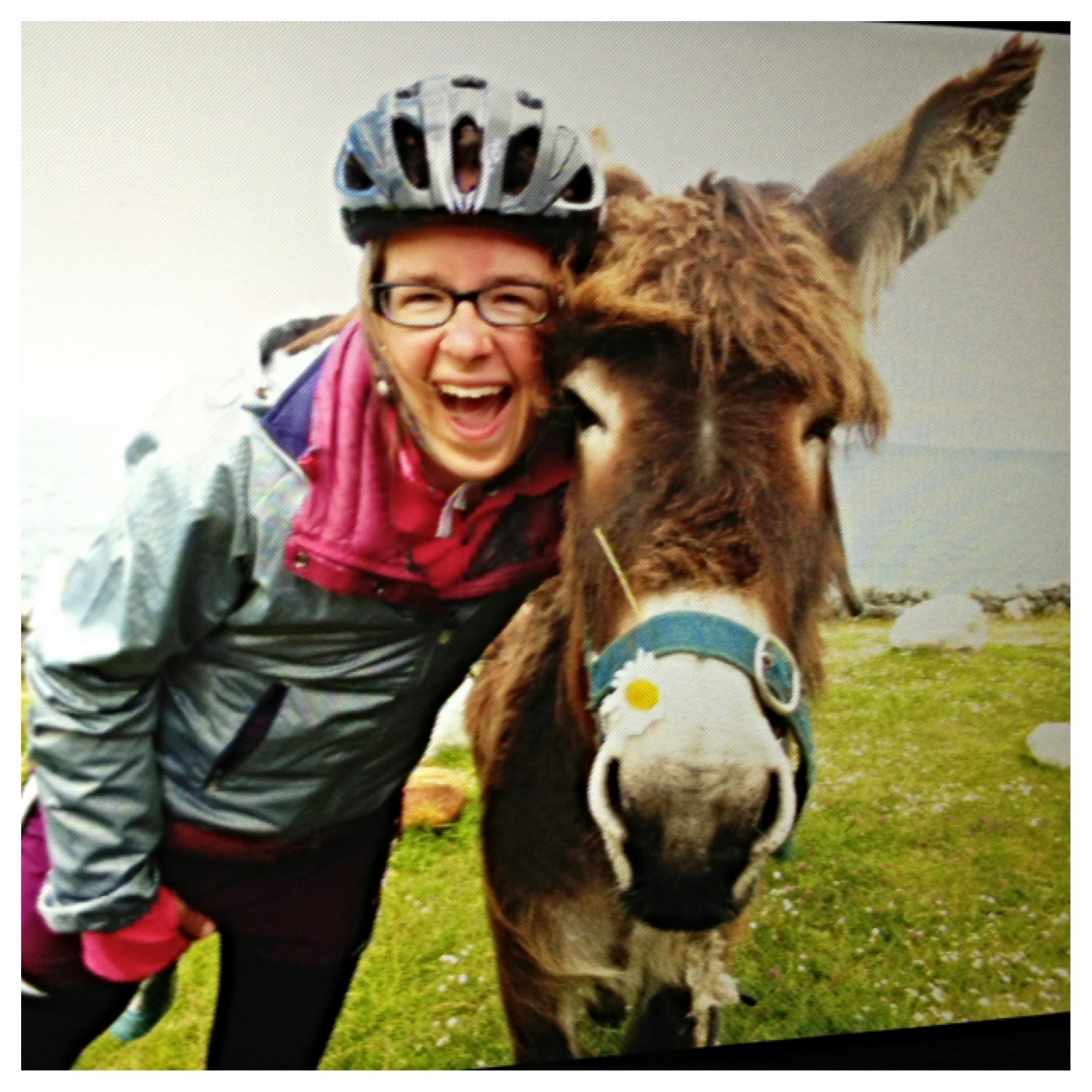 Jen: Another one of my favorite parts about being on the bike was the freedom I had to stop whenever I wanted. This really became helpful when I couldn’t help but pull over to the side of the road every time I saw a flock of sheep.  I was not used to seeing wildlife as such in Seattle, so the surprise factor still intrigued me every time I saw a new animal.  I took every opportunity possible to make friends with the animals. 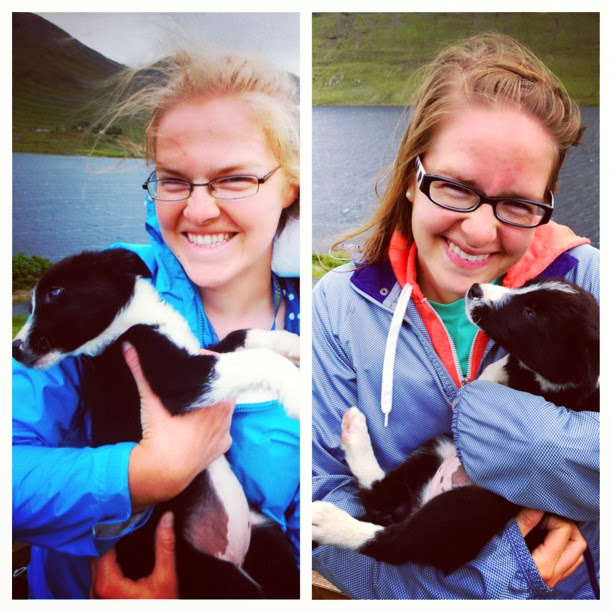 Jo: One day we met a sheepdog owner who trains his border collies to round up the sheep from the far mountainsides to come in for annual checkups and shearing. These dogs were not only very smart, but also quite commanding and very well trained. We were lucky to hold some of the puppies, some of which had already taken to the idea that their role was to herd, and it was adorable to see the small dogs following around the experienced ones. Connemara is known for its sheep, and it was a unique opportunity to witness this quickly disappearing way of life in the time we had with the herder. Little known fact we learned: you can tell the sheep apart from their bleats! They each have individual voices and it was amusing to hear the differences in their expressions. A sound bite I’ll definitely take away. 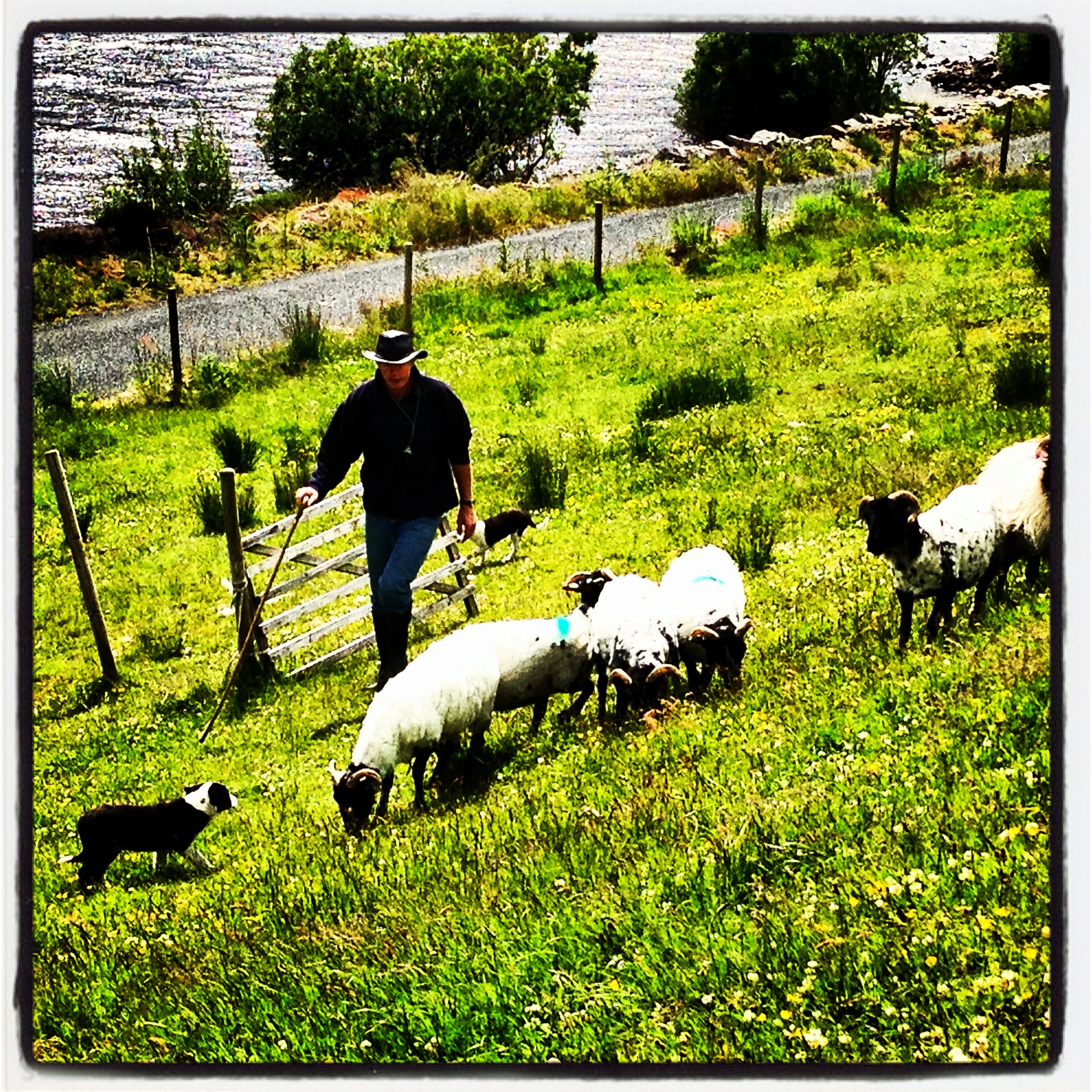 Jo: I hoped my family would all enjoy this trip. I had no idea that those days on the road would bring us closer together, and spur us on to see where else we can discover in the world by bike. Ireland was incredible, and to say that we had a great time would be an understatement.

Jen: I didn’t think I would say it so quickly upon my return to the states, but I couldn’t help but consider myself a cyclist.  I had withdrawal symptoms from my wheels the minute after I gave my bike back.  I know for a fact, I will have a new appreciation for biking and the adventures and places it can take me.  I look forward to the next multi-day cycling experience (and I sure hope it’s in the near future).  The travel-by-bike bug has bit me and the itch is not disappearing.