Greece: Travels with Benjamin, the Donkey 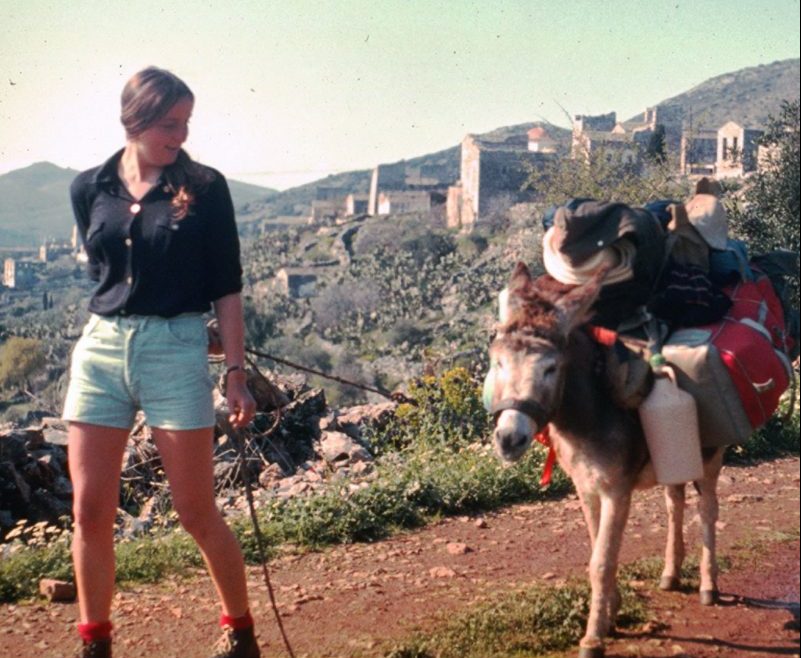 Greece: Travels with Benjamin, the Donkey

By Rick Price, founder of ExperiencePlus!

We bought Benjamin from a gypsy in a little village near Kalamata. Yes, Kalamata of olive fame in the southern Peloponnese. We made a decision to do this as we rode the train headed south from Olympia. I was reading Stevenson’s Travels with a Donkey in the Cevennes. Three times during that train ride I visualized us walking through the olive groves and along the dirt roads of Greece with our own donkey. Three times I mentioned my visions to Paola. Finally, she said, “Well, let’s do it!”

Much to my surprise, the hotelkeeper in Kalamata said, “Yes,” he knew someone who sold donkeys. “We can go tomorrow morning.” By 11:00 a.m. we owned a donkey. Paola immediately named him “Benjamin” from the Hebrew, meaning Jacob’s favorite son, his “right hand man.”

They told us Benjamin was four years old and Paola verified his age by looking authoritatively at his teeth and under his tail. We’d been married over five years and I had no idea she knew how to determine the age of a donkey. “What are you looking for?” I queried. “I haven’t a clue,” she replied, “but you’re supposed to look at these two things.”

The seller was so pleased with the deal that he invited the hotelkeeper and us for drinks. We celebrated, paid our forty dollars ($10 per year seemed right), got a receipt, and headed back to Kalamata which was about fourteen kilometers -not quite nine miles- away. I was to come back the next morning and ride Benjamin to Kalamata to pick up Paola and our gear. Benjamin came equipped with a packsaddle, so this seemed feasible.

Maybe this is when the herniated disk in my lower back began. The next morning Benjamin and I tried our best to agree on how he would carry me the distance to Kalamata. But after two hours and only four kilometers, I did the math and determined that we would be better off if we both walked at a comfortable pace than with me trying to ride Benjamin.

I learned more about how to drive a donkey in the next two hours than I thought possible. I now know that donkeys have excellent peripheral vision. Benjamin kept track of what was going on all around him… well, almost all around him. He couldn’t see what was directly behind him– that’s where I was. It was spring, and the smell of sweet grass perfumed the air. I quickly learned that Benjamin absolutely craved it. The minute I was out of his sight (i.e. behind him) he forgot our mission and headed to the right, to the tender blades along the road. A line from Robert Louis Stevenson’s book came back to me: the instinct of an ass is what might be expected from the name.

I decided to walk in front of him and lead him by the rope. I pulled and coaxed that stubborn donkey every inch of the way. “This isn’t how we do it, ” he seemed to say. We talked; I coaxed, I pleaded, I tried walking next to him. Nothing worked. Finally, he taught me that if I walked behind him and slightly to the left swinging a narrow stick in my left hand, then he would move right along. But the minute Benjamin couldn’t see my swinging arm and stick, he’d dive right into the grass. Needless to say, my arm got a good workout and as I mentioned before, I often wonder if this is when my back problems began.

Back in Kalamata, Paola was ready to go. We loaded our packs, tent, sleeping bags, cooking gear, and food supplies, then headed south along the coast road for another half-day hike. We weren’t sure about Benjamin’s food supply, so we bought a kilogram of oats as we left town and tucked them into one of the packs.

Over the next two weeks we hiked just over 200 kilometers from village to village with Benjamin. We would camp for two or three days then find a small pension or hotel where we could shower and get one good night’s sleep before camping again. Surprisingly, it wasn’t difficult to find small hotels with donkey parking! We learned how to navigate on old, very old, roads. At the time, I was convinced we were hiking on ancient Greek or Roman roads over 2,000 years old. Now I think they were actually Byzantine roads, built a mere 1,000 years ago.

Our campsites were usually in vacant fields near villages. We would ask permission to camp from people in nearby houses. We were always welcomed. The women in the village taught us how to pour water from the twelve-inch bucket of the village well into the one-inch opening of our water jug without spilling. The water served to wash the dishes and ourselves as we got up in the morning. For toilet facilities, we frequented a bush or a local café.

In camp that first evening Benjamin grazed as I set up the tent and Paola fixed our pasta dinner. A bright red frisbee was our only toy. We had used it in the stadium in Olympia to simulate the first Olympic frisbee event and we pulled it out to toss as the pasta cooked. “What about some oats for Benjamin?” Paola asked. “Sure,” I replied, “but where do we put them?” “How about in the frisbee?” she suggested. “Great idea,” I responded. I served Benjamin a large handful of oats on the frisbee. He was delighted! He ate every last one, asked for more, then went back to grazing. Paola, Benjamin, and I settled into a comfortable routine.

The next time I pulled out the frisbee to toss around, Benjamin went crazy. He brayed, he waved his big nose up and down, he salivated, he stomped around, and he got his oats. For the next two weeks every time Benjamin saw the red frisbee it meant only one thing to him: Oats! We were not able to use the frisbee as a toy again, but now we knew what it’s like to have a donkey happy to see you (or at least happy to see your frisbee!)

We arrived in Githion two weeks after leaving Kalamata. A fortnight with Benjamin was just right. We had other travel plans and needed to move a little faster. I think it was a Tuesday, and as luck would have it, Wednesday was market day in Githion. We found a committee in a taverna that evening to help us make up a “Donkey for Sale” sign in Greek. The next day we were at the market bright and early alongside the local farmers.

It seems that we were correct to ask the age of Benjamin when we bought him, as that is an important consideration to any potential donkey owner. It was the first question people asked us at the market. That, and, “Do you have proof or ownership?” Fortunately, we had our receipt and people were satisfied with that. Unfortunately, Benjamin was not four years old. The consensus was, confirmed independently by any number of passers-by, that “this donkey is twelve years old if he is a day.” We accepted that reality by mid-morning and our price dropped from $35 to $18.

We sold Benjamin with a twinge of regret, gave the new owner what oats we had remaining and kept the frisbee. Again, I recalled Stevenson’s book and how it had prompted this adventure with Benjamin. He wrote, …we are all travelers in the wilderness of this world, -all, too, travelers with a donkey; and the best that we find in our travels is an honest friend. He is a fortunate voyager who finds many. We travel, indeed, to find them. They are the end and the reward of life. We had a lot of travel experiences before Benjamin, and we’ve had a lot since, but our memories of exploring Greece on thousand-year-old paths with a donkey named Benjamin are among the best.