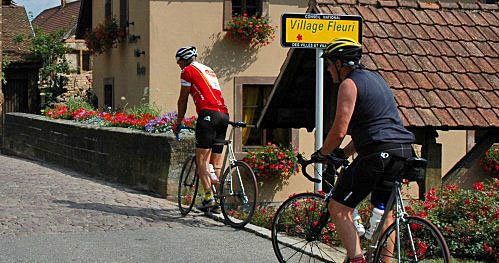 After the Cycling the Vineyards of Alsace trip debut in July 2010, cyclists proclaimed that the tour had earned itself an instant place on their “best trips ever” lists because of the region’s many treasures, brilliant colors and pastoral splendor.

The 14-day, 417-mile journey begins in the historic capital city of Strasbourg, France which quickly gives way to the beautiful Alsatian countryside dotted with palaces, villages and farmsteads. The intricately designed itinerary includes variable mileage options and rolling terrain suitable for intermediate riders who can decide daily whether to opt for a challenge or take it easy. All riders are sure to delight in the stunning views of the Vosges Mountains and Rhine River Valley on tour.

Bobbie Majka joined ExperiencePlus! on the July 2010 inaugural ride and reflects on how she decided to join a bicycling trip in Alsace. She also shares a bit about her impressions of the landscapes, the people, the cycling and the food.

I chose this trip because I had visited Germany 2 years ago and loved it and wanted to return. I had not traveled in France at all and thought the ExperiencePlus! bicycling trip might provide a little of both cultures– and so it did!

This was my first bicycling trip and I thought I could comfortably do a level 2, but decided on a mix of 2 and 3, as I thought it would make the terrain more interesting. I also hoped the trip would attract cyclists at the level 3, as I hoped I could learn from them.

First, the cycling: I loved the myriad of bike trails and small roads. One morning I am riding on a paved trail along rows of corn, and in the afternoon I am riding along a creek, and then I’m on a half-gravel road in a forest, and I end the day on a vineyard road. Another day I am cycling along a canal, and yet another day finds me on a road passing by hops on vines, and then on pathways through rows of blueberry bushes. There were also mountains that some in our group chose to ride; I decided these were beyond my ability and used the support van. However, I liked the smaller, twisty roads that took us into small towns. I marveled that we rarely encountered a busy thoroughfare.

I love architecture and history, flowers, and food. The half-timbered houses, churches, and castles, with each town having a slightly different look to it, provided quite an architectural palette. We explored a giant castle one afternoon — wonderfully restored. Churches in every town provided more history. We toured the largest bunker of the Maginot Line, concrete fortifications built along the border with Germany between the first and second World Wars. This experience stirred me. Lauren, our guide from Alsace, talked about his family’s experiences as the region moved from French to German and back to French control. I gained a much deeper understanding and appreciation for the acculturation of this area — and the impact on politics, borders, food, and families.

I loved the flowers in every town! — hanging profusely out of window boxes on almost every house and barn. There were also special flower arrangements in village centers in wagons and old wells. Towns were given “flower awards” ranging from 1 to 4, based on the number of displays. The results were posted at each entry point into town.

As for gastronomic pursuits, our tour leaders introduced us to lovely wines, pastries and delicious foods of the region — French/German inspired. We stumbled on festivals including a Cherry Festival; and a Sunday celebration, where Kugelhopf was served, and we were invited to join in — another delightful experience!

In conclusion, I think that the Alsace region is a well-kept secret. The area offers so much from so many different perspectives, and the bicycling was grand!