6 Reasons to Bicycle the Czech Republic 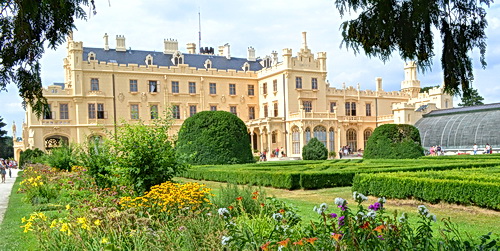 As a new mother (Lidia turned two a few months ago), I haven’t been on many bike tours the past 3 years, but this past summer I was able to manage one 11-day trip …and took Lidia with me! We (along with papa’ Michele) helped lead our Czech Republic tour which ended up being Michele’s second favorite (first is the Dordogne Plus! the Vineyards of Bordeaux) European tour of any we do, and Lidia and I had a great time. (Caveat: I don’t have a list of favorites since to me all of our tours have different things that make them wonderful each in their own way.)

But I can tell you why we all had a great time!

1)      The biking was relatively easy (something I needed as I am woefully out of shape and was pulling a bike trailer for half the rides), with low hills occasionally, and a few steeper climbs to mix it up a bit. I enjoyed that the mileage amounts varied so some days were perfect for easy pedaling and sightseeing, while others are longer and allow for a better work out.

2)      The country is PERFECT for biking, with very little traffic, lots of country roads and the scenery throughout the whole trip is extremely pleasant. While not stunning like coastal or mountainous areas, the countryside showcases rolling fields and forested hills punctuated by gorgeous castles and central European villages. The respect motorists have for bicyclists is on par with French and Italian drivers who know how to drive with bikes on the road—no wonder the Czech Republic has been attracting all kinds of European cyclists for years. Did I mention how MANY cyclists there were, groups, families, kids, singles, everybody is traveling through the Czech Republic with a bike! Most cyclists use the plentiful bike paths—we mix it up as several of them are unpaved and not ideal for our skinny tire bikes. Whether on the road or the path the cycling here is great!

3)      The towns we stay in are delightful—Mikulov is hopping with locals, festivals and European tourists (we were there during a free wine tasting and music festival); Znojmo, Jindrichuv Hradec and Trebon are very elegant; Telč’s colorful square is a treat to wander in; Česky Budejovice is a small city with bike paths winding through modern and historic buildings; Cesky Krumlov, one of the most famous towns in the country is simply breathtaking. Other places we visit along the route are equally as charming, specifically the small town of Slavonice on the road to Telč, with its intricate painted house façades.

4)      We have some great (and tasty!) visits—including one of the oldest breweries in the country, additional beer tastings (the Czech Republic does hold the title for the most beer drunk per capita, so they do love beer!), wine tastings as they do produce excellent wine as well, and we’ve narrowed in on the most intriguing of the many possible castles to visit as a group. I was surprised to find that there are almost more castles, in all imaginable styles, including faux-Tudor style, along our Czech Republic itinerary than there are along our “Castles of the Loire Valley” tour.

5)      Food in the Czech Republic is quite varied, with several types of soups, meat dishes (including pork, beef and game such as duck), fish, and sides of potato or bread dumplings. A meal traditionally starts with a soup or salad and then has a main meat or fish dish with side dishes. A common side dish is translated as “dumplings” and is like steamed bread—quite tasty and sometimes with berry sauces or gravy. We enjoyed quite a variety of meals, both in salads, soups, and main dishes with carp being a traditional dish in Trebon, which is surrounded by man-made lakes specifically for raising fish to ensure the town’s ubiquitous protein source. Though I may have had doubts, the carp was excellent! Desserts include crepes with ice cream or fruit sauces, sweet dumplings, cakes that rival Austrian cakes… if you love dessert you will have plenty of options to devour!

Like other countries in the region, vegetables are sometimes rarer than we would like, so we have supplemented our dinners together with additional vegetable dishes as side dishes!

6)      We bike through a part of the world’s history that I knew little about. While school does teach about the region’s more recent history under communism and post-communism, I knew very little about the Czech lands: its Celtic origins which then merged with Slavs, its status as an independent state in the Holy Roman Empire, the transformation into the Kingdom of Bohemia, subsequent monarchies, feuds and alliances with other Central European empires including of course the great Austro-Hungarian Empire. I felt the same way when scouting our Austrian Lakes and Slovenia tour—while some of the Austro-Hungarian Empire history is taught in schools, much of the intricacies of the pre-history and history of Eastern and Central Europe is not familiar to Westerners. A bike tour through these regions can right that wrong! I recommend A History of the Czech Lands by Jaroslav Pánek which is an excellent book on the Czech republic. Other renowned Czech authors include Franz Kafka and Milan Kundera.

Be sure to check out the Czech Republic photo gallery for more reasons to ride in this beautiful country.