Enjoying the Lakes of Austria and Slovenia

Eastern Austria is less frequented by Americans than, say, Vienna or Salzburg. But while it cannot rival the historic and cultural significance of those three-star attractions, it can certainly hold its own as a place of great beauty and comfortable accommodation. The state of Carinthia, along the Slovenian border, is dotted with beautiful lakes that have long been vacation getaways for Austrians. In September, when we were there, the peak crowds were gone, but there was still a festive flurry of activity along the shores. All the restaurants and hotels were still going full blast, although we did find that Magnum ice cream bars were post-season scarce.

Our ride took us by a different lake every day while we were in Austria. These lakes are mostly of modest size – you can bike around them in an hour or two – and generations of past admirers have left them surrounded with stately homes and hotels. For good reason: the lakes are beautiful and they are set beneath towering mountains. They have pure water (locals say you can drink it safely) 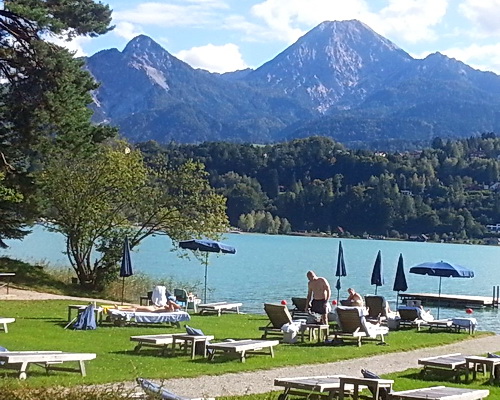 It is ideal country for a cycling vacation: there are many bikeways in the area, wonderful scenery, and drivers accustomed to having bikers around. There are occasional museums, churches, castles, but the ride itself is the star. ExperiencePlus! has selected good routes that snake along through scenic villages like Rosegg, along lanes covered by arching trees, along meadows stretching down  to peaceful lakes, and beneath majestic mountain peaks, Each day, getting there is way more than half the fun.

Austrian food is good and hearty; meat and potatoes stuff. It is inviting, and sometimes overwhelming. We ended up sharing the leftovers of an unbelievably huge mixed grill with a newspaper seller who happened in to our restaurant. We did not realize that we were missing our normal intake of vegetables until we spent a couple of nights at an inn with a creative salad bar with an impressive variety of offerings. The main courses got shortchanged as we feasted on the delicious salads.

Bathrooms do not usually get mentioned in travelogues, but an exception must be made for Austria. Every public bathroom we used, whether in nice restaurants, local bars, train stations, and museums was absolutely clean and spotless. It was a culture shock to get back to Washington DC after this.

About mid-trip the route follows a pass over the Julian Alps from Austria into Tarvisio Italy, and then on to Slovenia. It is a low pass, and made into an easy ride by a rail-trail that runs the entire distance. It was not an arduous ride–36 miles with a climb of about 1,000 feet–and the grades were gentle and it made us feel like champion bikers, crossing the Alps from Austria to have lunch in Italy and then onto our hotel in Slovenia.

One of the characteristic features of this region is its green waters. Looking down into a deep gorge the water flowing over the whitish rocks seems to be a clear, pale green. In deeper rivers or ponds it takes on a deep aquamarine. Surprisingly, our guidebooks did not discuss this, so we googled it and found out that it comes from being supersaturated with calcite and dolomite that are leached out of the local rocks.

On a scheduled rest day in the tiny Slovenian town of Podkoren we opted for getting off our bikes and doing a van tour of the surrounding mountains. Our Slovenian guide, Blaz, drove us up and down two dozen switchbacks in Triglav National Park, the scene of bitter conflict in World War I. It is the region where Hemmingway’s “The Sun Also Rises’ is set. When we read this book years ago, the setting seemed like an abstraction of remoteness, not some real place. Seeing the jagged mountains, feeling their remoteness, and hearing Blaz talk about the struggles that occurred here brought an immediacy and weight that were infectious.

We returned to our hotel in the tiny center of Podkoren a little later than planned, only to be greeted by two competing accordionists. One was provided as part of a ceremonial dinner for us out on the porch; the other was provided by a man running for mayor who was treating a couple of dozen of the villagers to beer, goulash, accordion music, and political speech. The would-be mayor spoke from a rustic float attached to a parked tractor. Apparently, Slovenia leads the world in per capita ownership of tractors. Once an essential for farm chores, the tractor has evolved to become a symbol of virility and status, kind of like pick-up trucks in suburban America.

Our trip to Bled took us through Radovljica, where we stopped to visit the Beekeeping museum. It was surprisingly informative (we did not know as much about the birds and bees as we thought). It was also very attractive. Because bees are attracted to color and identify their hive base partly on color, beekeepers over the ages have decorated their hives with a rich variety of artistic panels, hundreds of which are on display in the museum. There are also beehives that look like life-size sculptures. We came out of the beekeeping museum to find a couple of college-age boys admiring our tandem bike. Tandems are almost unheard of in Slovenia, and the boys were eager to try it out. After giving them a little instruction on the basics of tandeming, and collecting a cell phone as security, we let the boys take a brief test ride. They loved it and said and said it was the coolest thing that they had ever seen. 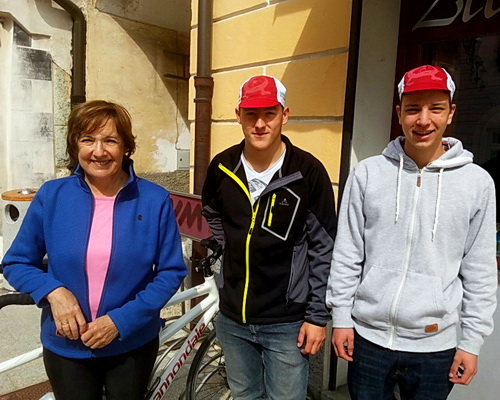 Blaz kindly invited our group to have a picnic lunch at his parent’s house. We ate out next to their garden, still loaded with various vegetables and fruits. It was nice to get a glimpse of the home of a modern Slovenian family.

Bled is celebrated for its beautiful chapel on an island in a lake overhung by a castle built into a sheer mountain face. The lakeside walk features numerous cafes and restaurants, and tourists from around the world wander around in awe of the majestic setting. We stayed two nights in Bled in a hotel that looked directly down on the lake and its chapel.

We had several tempting choices on our second day in Bled. One was a ride to Slap Savica Waterfalls. We wanted to have time to walk around the lake in Bled, so we opted for the shorter ride to the Vintgar Gorge. It is a spectacular gorge with steep vertical stone faces with a wood-plank walkway built into the side so that it is easy to walk about a mile through the gorge and enjoy the cliffs and the green waters. Along our bike route we had sometimes stopped on bridges and admired gorges like this from far above. We had been  hoping to have the chance to get down into one to see it from ground level, and it would be hard to find a more spectacular way to do this than a walk through the Vintgar Gorge. 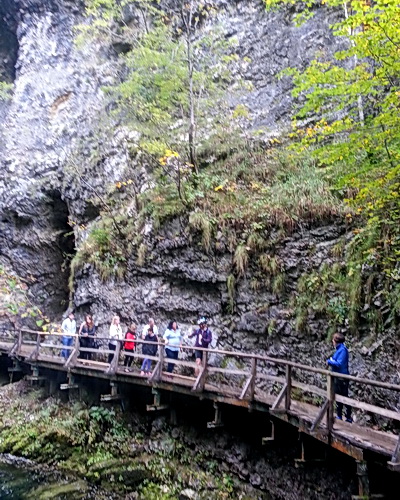 Our final day’s ride took us to Ljubljana, where we peddled through streets teeming with walkers, diners, and bikers. It was busy and exciting, but we were happy to park the bike at our hotel and then get into the hubbub on foot without fear of running someone down. It poured rain that evening as ExperiencePlus! provided an informative, offbeat city tour. Watching that downpour under our umbrellas made us realize how lucky we had been to have biked uninterrupted by rain for the past ten days.

If you haven’t cycled in this part of the world, give it a try.  We loved it.

Marjorie Kulash and her husband Damian stumbled into bicycling vacations when one of Damian’s co-workers needed to fill a last minute vacancy on the ExperiencePlus! Venice-to-Florence trip back in 1994. They loved the immersion that bike touring brings, and have been riding with ExperiencePlus! ever since. Long-time residents of DC, they are now both retired from federal policy work in employee benefits and transportation, respectively, and they enjoy spending winters in LA with their kids and grand-kids.