Austria and Slovenia: Captivating and Gorgeous 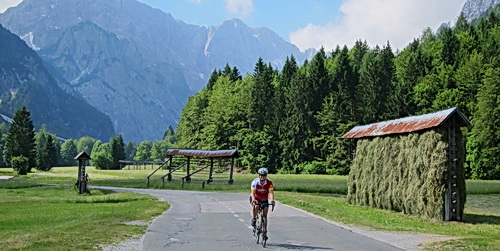 I’ve always been fascinated with Slovenia—a tiny country that is at the crossroads between Western Europe and Eastern Europe, a small country similar in 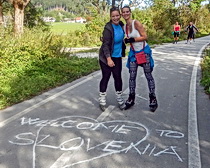 size to New Jersey, but filled with alpine mountains, pristine lakes, a bit of coast and an elegant capital city (Ljubljana, pronounced lyoo-BLYAH-nah). Slovenia is truly an outdoor lover’s dream come true. You can do just about any outdoor activity you’ve ever imagined in a pristine setting.  In fact, Slovenia earned ten medals in the recent Winter Olympics which to me is a testimony of its opportunities for outdoor recreation.  Slovenia’s neighbor to the north, Austria, has long been known for its mountains and Winter Olympic success and earned seventeen medals this winter including nine in alpine skiing events. There are few countries that can offer such a spectacular one, two punch! 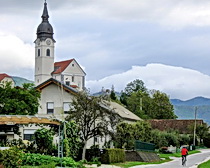 You’ll begin your ride with 4 days in Carinthia, Austria’s southernmost region which is characterized by mountains and clear lakes, including the scenic towns of Klagenfurt and Villach. The name Carinthia evokes hints of a mystic and ancient past to me and indeed this region has had quite a history as an independent principality and duchy, and then part of vast Empires, like the Frankish Empire and the Holy Roman Empire, before becoming contested territory for the Hapsburg Monarchy, the German/Austrians and then between the Yugoslavs (Croats, Serbs and Slovenes) and Austrians during the 20th C. Despite having a large Slovene minority 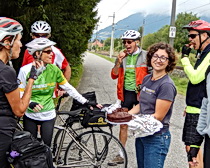 (indeed, some parts of this region have almost 100% Slovene heritage), the population voted to remain in Austria when given the choice in 1920. In addition to a fascinating history, this part of Southern Austria is a common German/Austrian summer resort area, as the scenic mountains, cool lakes and bountiful sights make it a great and relaxing destination.

From Austria, you’ll swing through Italy (for half a day) and continue on a rails-to-trails bike path into Slovenia, where spectacular mountain ranges like the Julian Alps tower over you as your forested path leads you to the tiny village of Podkoren and the Hotel Vitranc, one of our favorite stops. You’ll spend two nights here, taking time off the bike if you wish, or you can take the opportunity to do some hiking. If you are itching to ride that’s also a possibility. 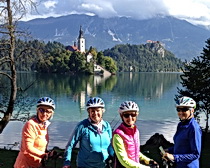 You’ll then wind your way to arguably the most famous tourist destination in Slovenia, picturesque Lake Bled with its iconic tiny chapel located on Blejski Otok (Bled Island) which is visible from almost anywhere in the town of Bled. While Bled is most known for its lake, its chapel/island, and its scenic setting, there is more to explore here. If you find this picturesque setting to your liking then you certainly need to continue for the full 11-day Plus! tour which includes Lake Bohinj. You’ll also explore the magical city of Kranj, and then into the capital city, elegant Ljubljana, a “pearl of Mittel-Europe”.

You’ll enjoy the easygoing nature of this tour, with fewer miles most days, you’ll have more time to relax at hotels 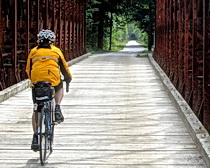 and explore. Despite being in a mountainous region, the 8-day tour is rated 101, and the 11-day itinerary is 101/201. For the most part the terrain is gentle as you’ll ride on bike paths and through valleys, but expect a few short, steep stretches where you can challenge yourself, or, if you prefer, catch a ride in the van.

This is a wonderful opportunity to bicycle through two of Europe’s most picturesque and compelling countries (we won’t count Italy as we don’t even sleep there, but you can have a gelato on your way through!), allowing for in depth time in both. Our September 13th departures are guaranteed to go and June 7th is very, very close so give us a call and join us on this amazing journey.